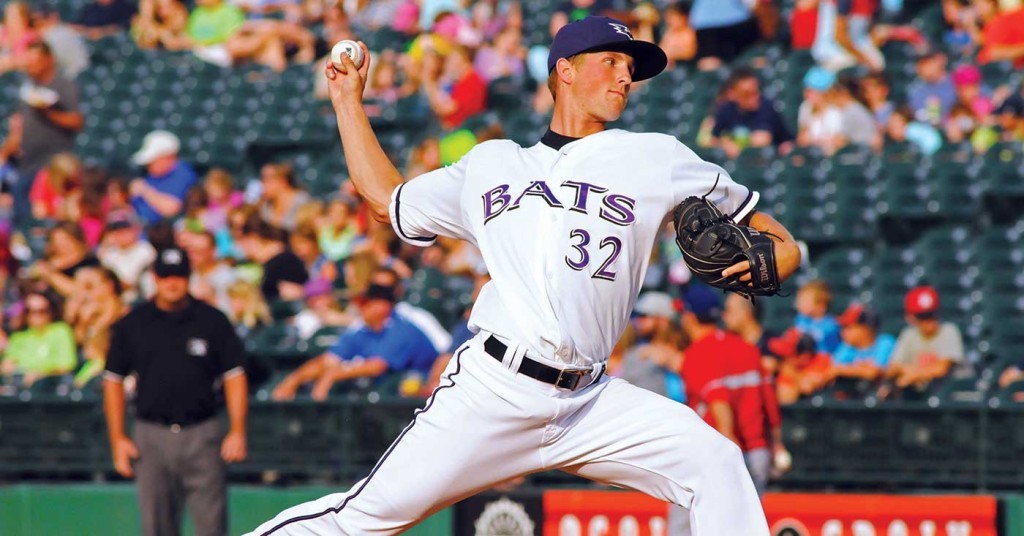 Summertime rolls around, and the Louisville Bats are winning. Not clubbing majestic home runs, or throwing one-hit shutouts, but winning.

That’s good news for a baseball franchise that has been mired in a three-year losing slump. And a fine thing to bring to a night in June at Louisville Slugger Field — winning, with a big crowd buzzing along with the hits and catches of the game, taking in the concessions, enjoying the between-innings dog-and-pony acts (including one with a real dog, Jake the Diamond Dog) — all leading up to a fireworks show to cap the evening. Friday night is THE big night at Slugger Field, and a 2-1 Bats victory over the visiting Buffalo Bisons fits perfectly into the experience.

“I didn’t know about the roster before the season. We had a lot of new signings, free agents guys,” says first-year Louisville manager Delino DeShields. “But it’s gotten to be a really good group. The leadership in the clubhouse, more so maybe than the leadership of the staff, has helped make us a good team.”

DeShields has molded a team that knows only one way to win — play solid baseball, honor the fundamentals, keep games close and grab what you can. That’s paid off with a modest victory run from May into June, with the Bats working their way above .500 (30-26 through Sunday) to take over second place in the International League West Division, currently 4 ½ games behind Indianapolis.

Somsen was called up from the Cincinnati Reds’ farm team in Pensacola, Florida, to start Friday night’s game in Louisville in place of Bats ace John Moscat, who had, himself, been called up to pitch in Cincinnati, which is nothing unusual in baseball. One day Layne Somsen is a relief pitcher for the Pensacola Blue Wahoos, the next night he’s starting for Louisville against Buffalo — and taking a big step up in competition from the AA Southern League to the AAA International League.

But it’s a good spot for a young pitcher because Louisville is winning.

Somsen begins the game with fastball strike, but finds himself in trouble later in the first inning, with Buffalo Bisons runners snorting and stomping around first and second base with nobody out. But just in time, the Bats infield comes up with a nicely-turned double play (the “pitcher’s friend”), and Somsen gives a little fist pump. You had to be looking to see it, just a little clench of the fist. You know a kid pitcher out of South Dakota State University wouldn’t want to let down his cool.

Also nice was Bats fans responding to the double play with a round of applause. When Somsen retired the next batter to end the inning, they gave him another hand coming to the dugout. Fireworks might bring out the crowds on Friday nights at Slugger Field, but Bats fans watch the game and notice good play.

In the bottom of the first, Bats designated hitter Jermaine Curtis parks one in the left field bleachers, and Louisville adds another run when outfielder Steve Selskey doubles off the wall and later comes around to score. Those two runs were all the Bats got, but all they needed.

Somsen, who is generally a relief pitcher going at Pensacola, did his job, shutting out Buffalo through four innings, with Louisville relievers taking it the rest of the way.

One thing that’s interesting about Friday night in Slugger Field is the crowd starts small, but grows through the middle innings. Parents with children arrive late so the kids will last until the end of the game and the fireworks.

Also in attendance are plenty of older kids, teens and college-age couples. Date night at the ballpark. Most are plain summer-dressed, but one young lady sported a shirt with a message reading: High Heels, High Hopes.

By the fourth inning every seating section is well-populated, and the concourse all the way around the park is full of fans on the stroll.

Between innings five Indianapolis Colts cheerleaders and a pair of Colts mascots take the field to entertain fans. The mascots come in inflatable suits, but one is much bigger than the other, sort of like a giant pro wrestler and his evil manager. The cheerleaders wave pom-poms and wiggle. When they dance in front of the Buffalo dugout, the Bison players pretend they aren’t looking. As 25-year-old baseball ballplayers would.

Buffalo right fielder Chris Dickerson (a former Bat) made a long, running, diving catch. But the catch of the game came when Bats hitter Chris Dominguez skied a pop-up foul down the right field line. The Buffalo first baseman came over to the stands, but he didn’t make the catch. At the very last second a kid in the first row shot a glove out and snagged the ball above the Buffalo player’s glove.

The umpire didn’t miss a beat, assuming the catch, and called the batter out. Reaching out for foul balls at a ballpark isn’t encouraged by management, but this wasn’t one of those cases where a whole bunch of fans lean out over the field spilling beer on a player and interfering with play. This was a sudden strike. The kid snapped leather on the ball and was back in his seat in a second. A really nice catch.

We should have run down and got the kid’s name, but instead bee-lined for a regularly scheduled visit to the Home Plate Grill for a Slugger Dog. This is not a regular frank. It’s a bigger dog they grill on a griddle. You may top with grilled onions, but I like my Slugger Dogs with the special green pickle relish. Emerald green. I asked Jenna at the stand, but she says she doesn’t know where it comes from. It’s the only place I’ve ever seen that relish. Recommended.

The new thing this summer at Triple A ballparks are time clocks mounted at the end of each dugout, like a basketball shot clock. Between innings 2:25 is allowed, and it’s 20 seconds between pitches. The interesting thing is everybody does fine with it, pitchers, hitters alike. What they ought to do now in major league baseball is add the clock and get rid of the time-eating instant replay — which is just a TV gimmick, like in basketball and football. Don’t I desperately wish for the call to be right? Not particularly. I want the umpires to make the calls, and if managers don’t like it they can argue and kick all the dirt on the umps’ shoes they like.

The Bats may get additional help this season as prospects rise through the Cincinnati organization. DeShields mentions Pensacola pitchers Tim Adelson and Keyvious Sampson, and hot prospect Kyle Waldrop, who hit a combined .338 last season at A Bakersfield and Pensacola.

But DeShields, who played 13 years in the majors, thinks the Bats best hopes begin with clubhouse chemistry and on-field execution — like bailing a pitcher out of a jam with a sharply-turned double play.

“That’s what we weren’t doing early in the year,” says DeShields. “We weren’t playing terrible. We were getting our hits, throwing pretty good. But we weren’t doing the small things. We weren’t getting guys in from third. Struggling in sacrifice bunt situations. Taking care of those kinds of things is what’s got us playing like we are right now.”