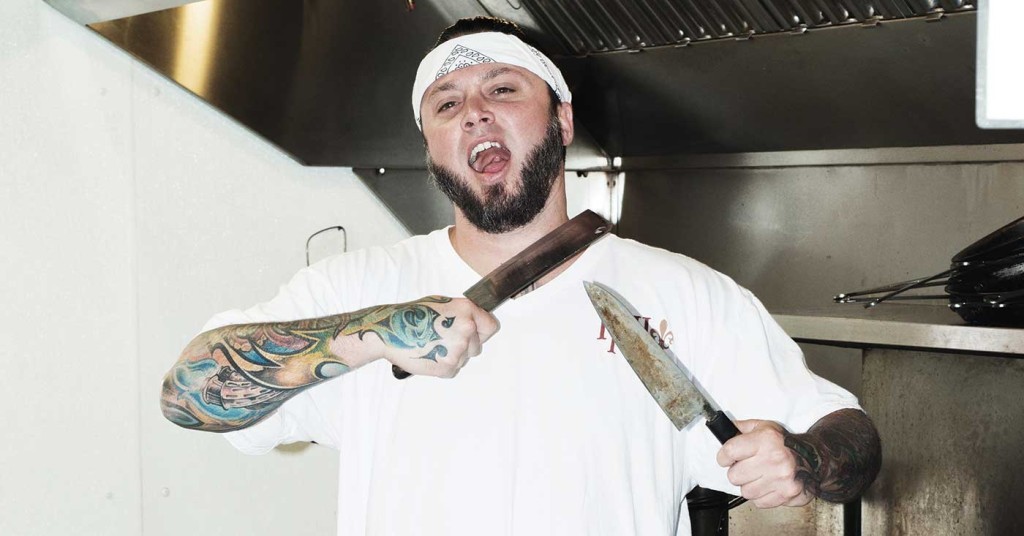 Dustin Staggers looks like a guy you’d run into at the gym or at a club quaffing an energy drink and killing time with his buddies. But beneath a relatively casual demeanor, he’s a mile-a-minute restaurant juggernaut who is constantly on the tail of his next project.

When I caught up with Staggers a few weeks back for a conversation at Roux, the New Orleans-themed restaurant he opened in the Highlands with his brother Kyle late last year, he’d just been to a meeting with a hotel group that was interested in having him manage some “monster concepts.” He also had met earlier with a private investor regarding yet another undisclosed project.

It’s a day in the life for a chef and restaurateur who only a year and a half ago was focused on running a successful business, with his brother Kyle, that focused on tax lien due diligence. But even then, his true love was the restaurant scene.

“I tried for years to get money to open a restaurant,” Staggers says. “[Local chef and entrepreneur] Fernando [Martinez] told me this: After you open your first restaurant, and you know how to market yourself and your food is good … you’re going to have to say ‘no’ to shit all the time.”

Staggers is not saying “no” to much, based on his track record since the opening of Roux. Along with Kyle and a couple of other fellow chefs and business partners, Staggers has since been a part of two other successful concepts, with more simmering on the stove. Rumplings, co-owned with Griffin Paulin, was a short-lived, but thriving, ramen restaurant in the Highlands, which served its last bowl of noodles June 6 with the promise of a new “smash” concept coming soon to the same location. Ten Tables is a pop-up concept of sorts that offers fine dining with a variety of courses that often are done off-the-cuff by chefs Staggers, Paulin and Eric Morris.

Meanwhile, Staggers is spearheading a concept called “America. The Diner,” which has faced some opposition from a neighbor but ultimately plans to bring traditional diner-style food to the Highlands.

The question that springs to mind, of course, is pretty simple: When does Dustin Staggers sleep? Well, not often. If he spent too much time sleeping, he might miss out on another concept.

“I really enjoy getting the concept going and building it and thinking of the ideas,” he says. He then reveals that he and Kyle and his other partners in crime are now looking for a place to open a bar. It might have food, and it might not, he says, noting that the concept was “kind of scatterbrained” at its inception.

Oh, and they also bought a food truck. There’s no set concept for that yet, so it may end up being a food truck that has no concept — which, in itself, is sort of a concept, sort of the way “Seinfeld” was a show about nothing. Such is life for one of Louisville’s most forward-thinking restaurateurs.

“It’s so crazy to think that a year and a half ago nobody even knew who I was,” he says.

His first foray into the Louisville restaurant scene was to design a menu for the Monkey Wrench a year and a half ago. The Southern-themed food got great reviews — particularly the fried chicken and grits — and it wasn’t long before Staggers had to scratch his primary itch and open Roux, a concept he’d wanted to do for years.

Natives of Florida, both Dustin and Kyle have spent a lot of time in New Orleans and love the city. The brothers wanted something that recalled The Big Easy in their adopted hometown of Louisville — they moved here partly because it is a logical hub for their original business, but also because they simply like it — and Roux was the result.

The success it brought kicked in a gear that most probably didn’t know Dustin Staggers had. But Kyle knew — he’s been watching his opportunistic brother for a lifetime.

Kyle tells this story about Dustin: “When the Beanie Babies thing was huge, he worked at a toy store that got them in. The store allowed the employees to have first dibs on the Beanie Babies. As I remember it, the people at the store didn’t see the big picture, or just didn’t care, so Dustin was able to get his hands on all of the most rare ones. He was young, maybe 16 or 17. And he sold them all before people realized they were just stuffed toys. He made a bunch of money off it, too.”

Some people are born with that kind of mind. But where does all the energy come from?

One possible suggestion is that Dustin Staggers was recently diagnosed as being bipolar. People with bipolar disorder are known for having extreme mood swings, from manic energy to deep depressions. But while Dustin Staggers understands his diagnosis might be a contributor, he really doesn’t buy that his opportunism is simply a side effect of bipolar mania. Not for a minute.

“This is all I’ve ever done, try to make my life better,” he says. “I don’t feel like I’m in this manic state trying to do all this shit. This is just what I do.”

He says he had a “weird” childhood that included him moving out of his mother’s house at age 14. While going through a divorce a little over a year ago, he decided to go to a psychiatrist to help himself work through the associated emotional fallout. That’s when his therapist diagnosed him as bipolar.

He recalls this dialogue: “She was like, ‘Dustin, we can sit here and talk forever, but if you don’t get on some meds, you are what bipolar is. You are that. None of this is ever going to get that much better. You’re still going to go through these really dark times and times when you’re on one of your manic trips.’”

But part of what made Staggers’ childhood difficult also makes him anti-medication — he doesn’t like taking pills. He’s seen what they can do. Still, he knew it was a necessary evil. Finding the right medication was the key, and he believes he’s finally done that after a few ups and downs.

“I was very specific with my psychiatrist,” he says. “I told her I’m an ambitious person; I want to move all day long. I see people zombie out on medication. I would rather go through the dark times than fuck with what makes me, me.”

But right now he’s on a medication that has helped calm him, balance him. It has helped him moderate what he admits can be a very short temper: “Now, I’ve leveled out a little bit. It’s been nice.”

And what that means is more restaurants for Louisville, because it’s what Staggers loves to do. Now that he’s found the dining scene groove he sought for so long, he isn’t about to slow down. Not for anything.

“I’m really good at seeing a space and then seeing what could work in there,” he says. “Seeing it built out and seeing it completely different than how it exists as it is. I can walk into a space and, even though I haven’t thought of a name or concept, think, ‘this could crush here.’”

It remains a bit surprising to Staggers that he’s getting the attention he has since this machine started churning, because, “None of these are revolutionary concepts. I like serving good food to people and giving them an option of something they may not have available to them.”

And still, the machine rolls on. Sitting in the bar area at Roux, he looks around. “If I don’t go to Monkey Wrench to make that fried chicken, this probably doesn’t exist,” he says. “Rumplings probably never existed. Sometimes I like to sit around and think about those ‘what if’ scenarios.”

But not for long. Because all those new restaurant concepts aren’t going to open themselves.

Correction: This article inaccurately stated that Rumplings was co-owned by Dustin Staggers, Griffin Paulin and Chip Hartley, but the only owners were Staggers and Paulin. Chip Hartley was not an owner. Our sincere apologies for this mistake.