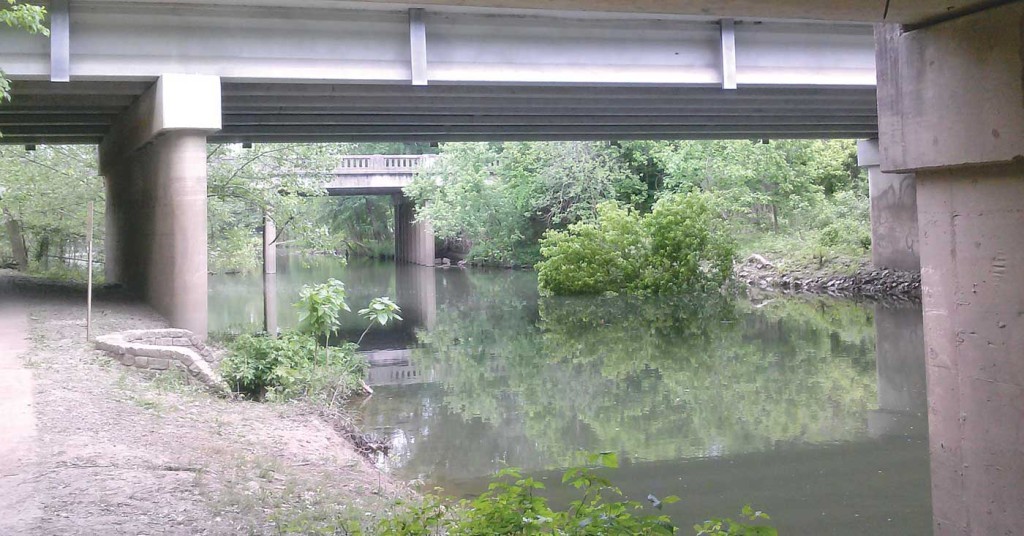 Paddling a canoe down Beargrass Creek is at once serene and startling. Ducklings paddle madly out of the way of your boat here and there, and lush green treetops reach out over the creek to provide a canopy against the morning sun.

The calm creek trickles slowly along as you pass familiar city landmarks like old River Road, built on railroad trusses from the 1800s, not to mention Interstate 71, through the gates of the MSD Beargrass Creek Pumping Station, Frankfort Avenue and Interstate 64. Along the way one can spot occasional glimpses of an original canal wall built in the mid-1800s, now mostly covered by silt and tree roots.

But along the way, guide Dr. David Wicks points out an enormous pile of concrete slabs which he identifies as the remains of the original Belvedere, dumped there after the landing was renovated in 1996. Deterioration of a stretch of bank near the city impound lot on Frankfort Avenue is considered a problem point, thanks to drainage of automobile by-products, in the abused urban creek.

Meanwhile, garbage — what Wicks calls “visual pollution” — floats everywhere, profaning what once was and still should be an ecological treasure. At one point, an unopened pound of Purnell’s mild sausage floated past our canoe.

“Guess it depends on whether you’ve had your lunch yet,” he responds.

But paddles are in motion to restore the creek to its previous importance to the city. Louisville Metro Parks, with the help of several area groups, has raised $75,000 that will be matched by the U.S. Army Corps of Engineers to study how to connect two trail fragments that follow the creek, known as the Beargrass Greenway.

There is about a one- to one-and-a-half-mile stretch between the two fragments that forces cyclists and walkers to cut through downtown and into the Irish Hill neighborhood if they attempt to follow the trail, but if the study reveals a realistic pathway and the city can make it happen, Louisville would have a continuous off-street trail between Waterfront Park and Cherokee Park.

Wicks, an environmental educator, is among many who have carried a torch to not only connect the trail fragments but to clean up Beargrass. Wicks paddles the creek several times a week in one of his many canoes and believes the creek can be restored to a thriving ecological resource.

He sees the project as having a three-fold benefit: First and foremost, it will stabilize the areas adjacent to the creek, many of which have been used as illegal dumps. Secondly, it will “put more eyes on the creek.” And by doing that, the third benefit will be that with that newfound focus on Beargrass Creek, it will motivate the community to restore it and keep it clean and accessible.

The big problem with Beargrass Creek is that the lower reaches of it have for years been victimized as a dump for sewage overflow by Metro Sewer District. In fact, it was in 1851 that the aforementioned canal was built — because the creek was re-routed to empty into the Ohio River upstream from where it originally ended. Originally, the creek made a sharp turn west and continued toward downtown, past where the Big Four Bridge is now.

That latter part of the creek became part of the city sewage system. But the rest of the creek continued to thrive, and in the early 1800s, an area fronting the river and adjacent to the creek was a thriving, affluent neighborhood called “The Point.” It was largely inhabited by French families who came north from New Orleans each summer to escape the Southern heat.

If you’ve seen the façade of the Heigold House at the entrance to Frankfort Avenue from River Road, you’ve seen one of the only remaining artifacts of The Point’s heyday. The area was badly damaged by several floods through the 1800s and early 1900s before being totally destroyed when the waters rose in 1937. It was never rebuilt.

Connecting the trail and restoring the creek would help pave the way for a planned botanical garden where The Point once stood. And that would once again make the area a thriving part of the city. But first, a pathway must be found and executed.

Lisa Hite is a senior planner for the Metro Parks Department and will help oversee the study.

“We know it’s not going to be easy to make that connection,” Hite says of bringing the trail fragments together. “That’s the reason it hasn’t happened yet. If you walk it, you know what I mean. There’s a lot of industrial and private property, and just about every barrier you can imagine.”

That said, she acknowledges that no one has ever made a real effort to figure out how to make the connection. That’s the point of the study, which will let the city know if it is doable and how expensive it might be.

“We wouldn’t be doing it if we didn’t think there was a possibility of it working,” she says.

A few years ago, the city was charged by the EPA with making $850 million in upgrades to the sewer system by 2024 to avoid sewage spills. The current system collects both storm water and sewage, and was designed to overflow during heavy rain. The resulting overflows now violate the EPA’s Clean Water Act.

These upgrades will help restore Beargrass and would make more people happy than just Wicks.

“There’s lot of excitement around this,” says Mark Noll, a board member with Cycling for Louisville. “It’s not only the cyclist community — a lot of local groups support it. This project, I think, is a really important project for the city of Louisville. If we’re able to complete that, we’ll have that continuous multi-use pathway. It would make the existing trails a lot more popular than they currently are.”

Meanwhile, filmmaker Morgan Atkinson is working on a documentary to be titled “Beargrass: The Creek in Your Backyard,” which supporters hope will further bring focus to the creek’s historical significance and environmental importance. A Kickstarter campaign has raised more than $12,000 for the project, and the film’s executive producer, Wicks, is looking for people to share stories and memories about Beargrass Creek (e-mail [email protected] to contribute).

Hite says the Corps of Engineers study will begin in late summer to early fall, and will take up to a year to complete. At that point, a decision will be made as to what direction to go.

As I paddled down Beargrass Creek with Wicks, deep in the heart of the creek’s bed, watching ducklings avoid floating milk containers, soda bottles and more, it seemed like a no-brainer that Beargrass Creek has suffered long enough.