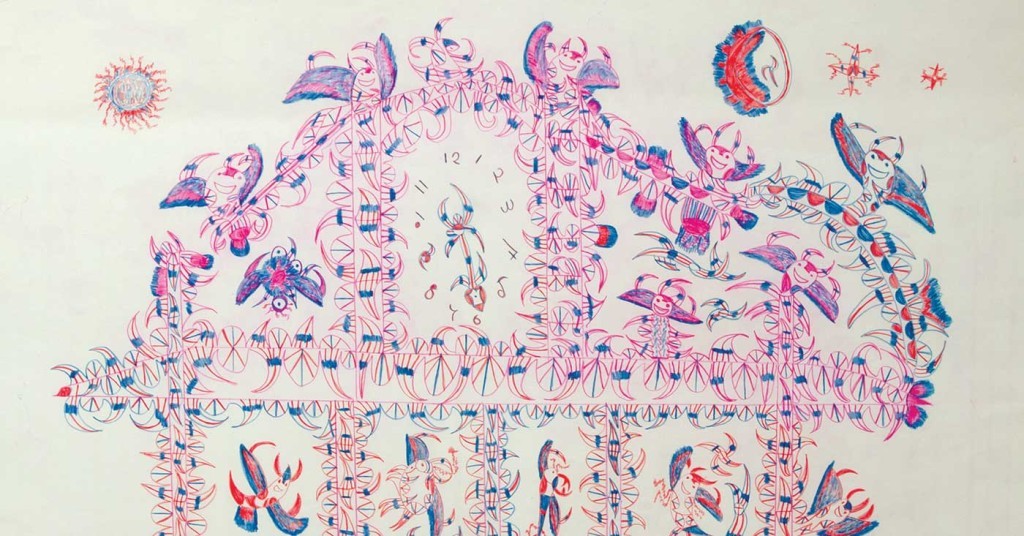 What do humans need to survive? Oxygen, of course. Food and water. A shelter to shield us from the elements and where we can sleep. Clothing optional (not really).

Before coming to the museum, I’ll pass on the same advice food experts say about shopping at the grocery store: Don’t go hungry. The food depicted in the acrylic paintings by Gina Beavers is gluttonous in detail, technique and size portions. The steak slab in “Local Pastured Beef,” coupled with “Yum Donuts,” practically did me in.

Shelter is a place of calm refuge for most, but not for Frank A. Jones. He began seeing what he called “haints” (ghosts and devils) when he was nine years old. When Jones began drawing, he drew the spirits in houses with cell-like rooms. He felt these colorful dwellings he called “Crick Devil Chinee” controlled the haints’ powers and protected him from harm. Unfortunately, for part of his life he was also in his own cell at the Texas State Penitentiary.

The photographs by Ursula Schult-Dornburg of “Bus Stops” in Armenia feature shelters that look like they were constructed with material left over from other building projects. While they are real structures, many look temporary, humorous and like stage sets.

Part of the exhibition burst out of its own museum “shelter.” “Grain Pit” by the art group Futurefarmers is in the lobby of Republic Bank at 601 W. Market St. The installation is built from the wood of Kentucky barns to resemble an old trading floor used for grain sales.

Louisville artist Kenyatta A.C. Hinkle has a very personal take on clothing. Because of her African features, she noticed whatever she wore had people telling her she looked exotic. As part of that observation, she invented Kentifrica (Kentucky and Africa combined) as a place for self-expression and storytelling. Her “Traditional Attire of the Asheentee Healing People of Central Kentifrica,” composed of cotton, deerskin and beads, is part of the idea she created “to break the mode and to remix and reimagine what the past, present and future can be for the people left behind when history is written by the victors.”

Clothing makes the man — or so we have been told. The “White Collar” series by Anika Simulovitz is based on the belief that the white oxford shirt is an important part of upper class male uniform. She altered the collars so women can wear them and benefit from some of that authority.

Clothing is also part of The Mending Project. Volunteers are currently standing by to repair museum visitors worn and torn textiles. “The word is just starting to get out to the public about the project,” says Kathleen Loomis, a The Mending Project volunteer and textile artist. “The [June 5] First Friday Trolley Hop was the first time I got to actually mend anything and that was a joy! Although technically we’re supposed to pile the mended garments onto the table until the end of the exhibit, I’ve been embroidering flowers onto the hems of people’s skirts and pants — which they walk away with, of course — just for the pleasure of using my needle to get a smile or two.”