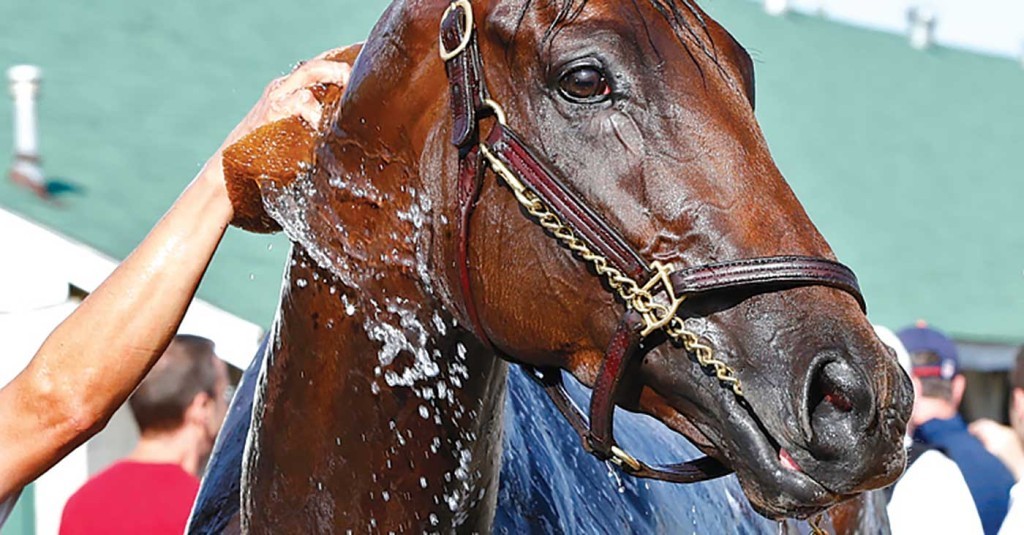 American Pharoah has won six races in a row and captured the imagination of horse racing fans with decisive victories in the Kentucky Derby and Preakness. If he can add the Belmont Stakes this Saturday at Belmont Park (NBC, 5 p.m.) American Pharoah will take a special place in history as horse racing’s 12th Triple Crown winner — and first since Affirmed, in 1978.

LEO Weekly turf writer Bill Doolittle caught up with American Pharoah last week at his home-away-from home at Barn 33 at Churchill Downs. The long-striding, mahogany bay colt — a son of Pioneerof the Nile, owned by Ahmed Zayat and trained by Bob Baffert — had just turned in another swift, but effortless-looking workout, but now was taking it easy, munching on a rack of sweet alfalfa hay, and obviously in high spirits looking forward to the flight to New York and the challenge ahead.

LEO: Everyone is so excited about your quest for the Triple Crown, so thanks for the time this morning, Mr. American Pharoah.
American Pharoah: You may call me Pharoah.

LEO: Wow, you really have a deep voice!
AP: From beyond the pyramids and across the sands of time.

LEO: You mean there’s actually something to all that ancient Egyptian stuff? You being sired by Pioneerof the Nile, with all those tombs and pyramids?
AP: As it is written.

LEO: But I can’t get over the voice. Like it comes out of a great stone canyon, from thousands of years ago …
AP: You like it?

LEO: Huh! Well let’s get on to the Triple Crown. You’ve won the Kentucky Derby and Preakness, now it’s the Belmont Stakes standing between you and the Triple Crown …
AP: Nothing shall stand between Pharoah and destiny.

LEO: There’s that voice again. Must be the enormity of the feat — no horse has taken the Triple Crown in 37 years, and you seem to be right in the spirit of the quest. Is the Triple Crown on your mind?
AP: Sure, you think about it. There are reasons why 14-straight Kentucky Derby and Preakness winners have failed in the Belmont.

LEO: Like the distance, you mean? The Belmont Stakes is 1 1/2 miles, the longest classic race on dirt in North America. They call it the “Test of Champions.”
AP: Well, I don’t imagine it is any more of a Test of Champions than the Kentucky Derby — a mile and a quarter on the first Saturday in May. With a 20-horse field.

But like you say, distance is always a factor. Otherwise you’d see all these scat-cat horses winning classic races. But they never do. The distance is always the thing. Now, if you’re just galloping along in the morning, nobody around to bother you, birds singing, 1 1/2 miles is just exercise. But in races, at speed — with super-fast horses to outrun, and closers coming behind you — that’s different. A mile and a half is a long way.

LEO: Plus they say there are traps peculiar to the Belmont. Like the size of the track. And the clever New York jockeys …
AP: Jockeys. Hurumpff! Jockeys’ve got nothing to do with it. It’s the horses, man. The horses do the running. Even though jockeys like to take credit. You know how they stand up in the stirrups at the finish and wave their whips in the air like they did it.

LEO: You don’t care for that?
AP: If Victor doesn’t quit doing that I’m going to stick my toes in and launch him two strides from the wire.

LEO: You don’t like Victor?
AP: No, no, he’s fine. You know, for a jockey. But you know what Charlie Whittingham said, ‘Never trust a man that wears a size three hat.’

LEO: You seem to know a lot of stuff, for a horse.
AP: Well, I travel a lot, and there’s not much to do in a stall all day, so I read.

LEO: OK, let’s get back to horse racing. This spring, you started in California, flew to Arkansas for the Arkansas Derby, vanned to Louisville for the Kentucky Derby, flew to Baltimore for the Preakness and back to Churchill. Now you’re jumping on a plane to New York. It seems so hectic, how do you keep track of everything?
AP: I’ve got people for that.

LEO: You seemed to relish the off-track at Pimlico when the clouds burst and it came down raining so hard right before the start of the race.
AP: Oh, I love rain. It’s cool, and when it really pelts down on you it feels great. And the track gets all soft and splashy … Hey, I’ll tell you a story. You know that horse Dortmund? That big, tall horse?

LEO: Sure, Dortmund. Third in the Derby, but up the track in the Preakness.
AP: Heh-heh. Yeah, that’s him. I got to tell you, I got him good right before the Preakness. You remember how it came down raining cats and dogs right before the start? Well, we’re walking up to go to the starting gate. I’m all digging it, but Dortmund, he’s like tippy-toeing through the mud, like he doesn’t want to get his hooves muddy. So I come over right next to him and slap a hoof down right in the mud next to him — Splat! Mud splashes all over him. It was hilarious. You should have seen the look on his face. Later I heard Divining Rod did the same thing to Firing Line. Splashed him in the face. Rod was telling me when they went in the starting gate Firing Line was looking down cross-eyed at a big glop of mud on the end of his nose.

LEO: So that’s why those two ran so bad?
AP: Maybe. All I know is I was really happy to look up at the tote board in Baltimore and see the exacta pay $124, and the dollar trifecta come in at $492. My fans have taken a whipping in the betting all spring. Do you know that since January every Derby prep has been won by the favorite? With the other chalks following along like trained donkeys? I mean the Derby trifecta was just $101 — the lowest in history! Like trickle-down economics.

LEO: Getting back to the Belmont, it looks like they’re loading up to challenge you. Three of your opponents are trained by Todd Pletcher …
AP: Who?

LEO: So is there a horse you are worried about for Saturday?
AP: Well, I’ll have an eye out for Frosted. He’s a good horse. But the one that I think can get the distance is the Irish horse. He’s got a distance pedigree.

LEO: How do you say his name?
AP: Mubtaahij. The way you say it is you grab a big mouthful of hay — like this — and start chewing, chomp-chomp, and say: ‘Moonbeam.’ Everybody will know who you’re talking about.

LEO: OK, AP. Here’s the Big Question: What’s your plan for Saturday? How will you win the Belmont Stakes?
AP: You know how I run. I don’t stop and start and lurch around all sudden-like. I’m all smooth. Big stride. I’ll just take a spot up near the lead where I can see how it’s going, then wait until maybe the end of that big long second turn, and then just push down on the accelerator. Get into that big mill. Tune it up! Turn it on!

LEO: And you’ll win?
AP: Sure thing, Billy Boy. You know I am just the horse for this Triple Crown thing. (Then he clicks off a little sly wink, and drops his voice down into the canyon again): American Pharoah says, ‘Bet me.’ •