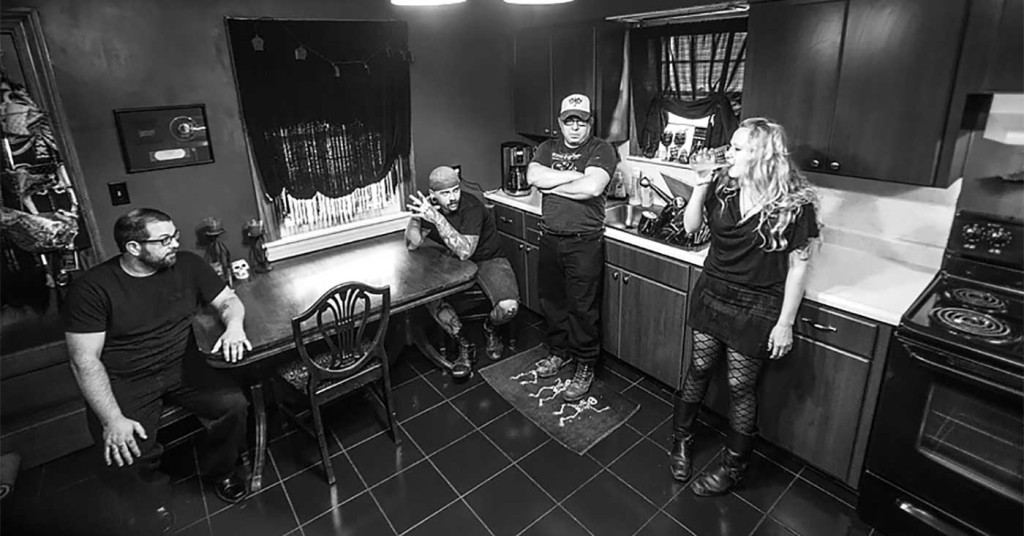 I Have a Knife

For many, Sean Garrison is a legend. Garrison served his time with some of the finest in the Louisville punk scene, first as a member of Maurice, half of which went on to form Slint. Garrison’s formative years were spent with the mighty thrash metal band Kinghorse, who informed a generation of musicians, bridging the gap between South End kids and the rest of the city. Since Kinghorse ended in the late ’90s, Garrison has had stints as a columnist in LEO; as an artist, whose neo-primitive art is bright, if visceral; and has performed under the name Driftin’ Luke, and later as Sean Garrison and the Five Finger Discount.

This last year has seen the birth of his newest project, the excellently-named I Have a Knife. So what drew him back to punk music after taking a more than a 10-year break?

“In a world where people pay $150 plus to see the same musical scum who filled me with superhuman rage and disgust in the 1970s, is there any other illogical course of action? I want to spill the last of my piss and vinegar all over the streets of this town,” he says. “All the stuff I hated back in the day still dominates the culture. The voice of the true outsider has been silenced by the fake hipster Christians and the passive-aggressive yoga ladies. With my last breath, I shall spit at them.”

For Garrison, the formation of the band was almost pre-ordained. He explains, “It started because (guitarist) Greg Livingston must rock mightily. Verily I say unto thee that Greg Livingston is a half-orc fighter/mage with a constitution of 18 and a +4 vorpal axe. Our bass player is Gabrielle Kays from The Revenants and our drummer Evan Wallace specializes in suicidal bicycle wrecks.”

The band’s name has an equally righteous story.

“There is a great quote from the Middle Ages that I adore: ‘Let others brag vainly of love, for we have the food and the knife.’ I have a knife, you have a knife — everyone has a knife. It’s 1183 and we’re barbarians — how clear we make it.”

Of course, he bristles at the idea that this was meant to illicit a challenging response. He replies, “I have never been a provocative person, and I resent your implication. Good day, sir! I said good day! You stole fizzy lifting drinks and now the Oompa Loompas must sterilize the ceiling. Man, I have had way too much coffee.”

Garrison is characteristically blunt in his motivations. Of his ambitions he notes, “My goals have always been quite clear — I aspire to be an agent of chaos and stupidity. This is because I find normal life almost unbearably dull. How could I sit still in algebra class when I could be out there living like Gomez Adams and Evil Roy Slade? Adventure was what I wanted. This situation calls for a really stupid and futile gesture to be done on somebody’s part.”

What distinguishes his work with one band from another? Ever the agent of chaos, Garrison didn’t take kindly to the implication that his music was work: “Don’t ever call any of my creations ‘work’ again. I did these things to avoid productive and responsible behavior. By age 10, I considered my life totally ruined and I figured I would end up dead or in prison. The only alternative to crime was music, art and the creation of memorable incidents that bards would celebrate in poem and song.”

As to the next generation of musicians, Garrison has the blunt, if pragmatic belief that, “To be a success in the legit music business you must either be a narcissistic blowhard who eventually drifts into ‘spirituality’ or a whore. If you are neither of these things, you have no chance. Considering that music is a suicide mission that is used for people who cannot/will not hold down a real job, my advice to the young people is to fail as spectacularly as possible. People are either going to like what you are doing, or they aren’t. Stop caring.”

What can you expect at their first show? Garrison explains, “That depends on whether there are any assholes under 30 left in this city who want to thrash around and break shit. If not you will see a herd of aging punk rockers hanging around and talking about their kids and how they want to remodel their kitchens.”