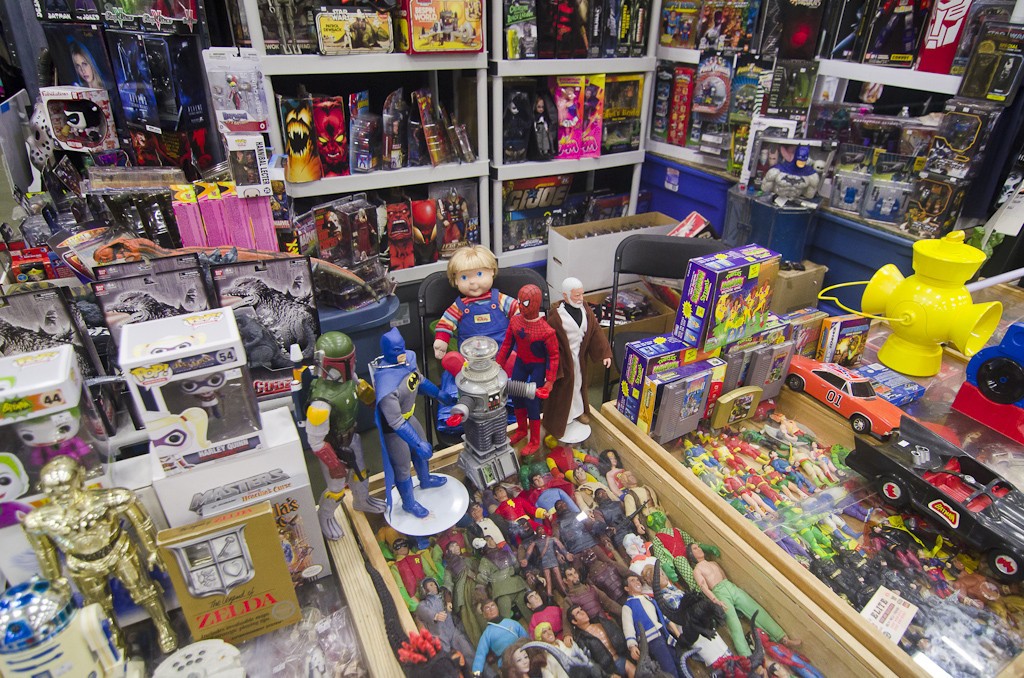 Comic book conventions have become big business over the years, with events like the San Diego Comic Con serving as the launch platform for marquee movie or television properties, while playing host to a variety of comic industry professionals. These conventions are a meeting ground for nerds of all stripes, be that of the comic book variety or just fans of genre fiction. There is cosplay — the act of dressing up like your favorite character — and plenty of gaming options, all of which provide an escape from everyday life into the fantasy of your choosing. For the last five years, the Derby City Comic Con has aspired to become part of our national dialogue on all things nerd and geek, growing in leaps and bounds over the years to the sprawling spectacle it is today.

Last year’s con was my first experience with the DCCC, although not my first con. Held at the Kentucky Convention Center, the Convention had a number of vendors selling all sorts of wares, from used comic books, the subject of my interest, to original artwork, gaming paraphernalia, both of the game and pen and paper variety, and other such ephemera of the nerd culture. There is an artist’s gallery, row after row of aspiring artist there to peddle their original work, be that in prints made to request or in their own unique creations, stories independent of the Supermen or Spidermen of the fictional world. A good comic book convention is a testament to all of these things and more, like a car show highlights all the best of the automotive industry. The question is how does the DCCC hold up?

Day One
The opening day of the convention was this last Saturday. Held again in the Kentucky Convention Center in downtown Louisville, the DCCC wasn’t the easiest thing to find this year. Last year, it was immediately apparent where to go and what was going on where. There were signs everywhere, although that wasn’t immediately necessary, as the convention was centrally located in what seems to be the main room of the convention center. Unfortunately, this year there was a cheerleading convention held simultaneous to the DCCC, the polar opposite of each other if such a thing were measurable, which was held in that main room at the 4th street entrance. As such, it was difficult to locate this year, which was not the most promising start. Located on the second floor in a back center area of the building, there were only small, 8 ½ x 14 or 11 x 17 sized posters up as guides, which while visually appealing, did not grab the eye at a distance; finding the convention should not be like navigating the Lost Woods in Hyrule.

Once found, there was plenty to see with vendors set up throughout the area in a traditional way, with the artist’s row at one end and the various shops, both local and otherwise, toward the front. One vendor from Dayton, Ohio had $4 trade paperbacks, a remarkable deal considering that these collections usually go for between $15 and $25. Unfortunately, the available content was clearly their overstock, with a hodgepodge of titles that often started with the second volume of a series, or that might have the first and third, but not the second. There were certainly some great finds there, but insofar as this went, these were the best finds on the floor. Make no mistake: there were other vendors. The problem though, is that with very few exceptions there were almost no other deals like that out there, including the local vendors. Most place were selling their wares at cover price; if I can walk into your store and do that now, why would I pay $15 admission for the privilege to do the same?

Upon our arrival there was a cosplay parade happening, which included any number of folks in costumes of varying quality and commitment to character; trust me when I write that there were some very committed individuals walking the floor. It’s always fun to see what gets people motivated to action, and the crowd seemed very interested in the proceedings, which culminated in a competition that judged who was best in show. Relative to that, there were a number of booths dedicated to costuming or jewelry, that were located prominently around the venue, belying the very real fact that cosplay is a central draw to the convention. It’s not a primary interest for me, but it is certainly fun and a fan favorite.

Artist’s alley is a little depressing for me. That’s not unique to this convention by any means, but rather a reflection of the anxiety I’m filled with when walking past people who are desperately trying to get their name out; it’s definitely me more than them. The talent available varies greatly in quality from folks that need to keep working, and some that are remarkably talented. A few highlights this year was the cartoonish art of Steve Bowman, the insanity of artist Matt Haas, and the slick production of Marvel Comics inker Jay Leisten. There was a sculptor there named Jonathan Matthews that does work primarily for DC, and his stuff is amazing, especially a Batman statue constructed in the style of Mike Mignola. It’s interesting, if a bit intimidating in a way, to see what it is that people do well at, and what people are clearly aspiring to.

What there wasn’t at the DCCC is a lot of big name talent, a break from last year. That’s not a comment on the talent that was there, insomuch as that there weren’t as many of the famous creators, be that writers, pencillers or editorial staff this year as there was last year. There were no comic book/sci-fi oriented celebrities there, perhaps as a result of the upcoming Fandomfest, which specializes almost exclusively in such, or possibly as a reflection of the DCCC remaining focused on comics professionals instead of celebrities. Unlike other conventions there weren’t a ton of panels for discussion.

Leaving at 5pm, I was relatively empty handed. The deals were far and few between, at least for the sorts of things that I was looking for, although there were tons of single issues, toys, costumes and original art to be had, which would surely satisfy many. In comparison to last year, everything seemed a little atrophied, from the space to the guests in attendance, to the deals available. As a jack-of-all-trades, the DCCC kind of lacks any kind of niche specificity; there is a little of everything for better or worse, rather than a focus on one thing over another. This isn’t uncommon at conventions, but given what seems to be the slight decline in size, location and guests, it seems like the DCCC could benefit from a distinct presence to set it apart from other conventions of perhaps bigger size.

Day Two
My experience during my second trip was night and day. Sunday, which was also my first Father’s Day, was a trip taken this time with my wife and daughter in tow, allowing me to look at the event with different eyes. Here I found myself a bit more open to the experience of just trying to find something fresh, of trying to appreciate the convention from the perspective of a parent or as a younger person. There was a lot to offer. Instead of just looking for the best deals — deals I still didn’t find — on trade paperbacks, I just reviewed the floor for things that looked fun. As such, there was a lot to offer, be that in books for kids, or just fun picture opportunities or toys.

The first piece of business I had to attend to was the panel I went to work on, the Comics To Films Translation Panel held on Sunday afternoon. That the panel was held on a separate floor, in the basement well apart from the main event, was indicative of the general disorganization of the event, or at least in the logistics that lead to such. Instead of passively stumbling into an event, an event held on a holiday and during the middle portion of the afternoon, you had to know exactly where to go, which wasn’t especially easy given the available signage; even having visited the day before, I still ended up lost prior to the event.

It’s hard to say if that is why my panel was so poorly attended, as it certainly was. It could have been Father’s Day, that it was in the basement and a bit hard to find; that it ran counter to another, more successful panel (see: Pixel Brain); that it was just on a Sunday in general and that folks may be atrophied from a long week/weekend of obligation; or maybe it was just not the right panel. Although it was sparsely attended, the people in attendance were clearly interested in the subject and seemed to have a lot of fun, with an ecstatic crowd response that resulted in a blurring between crowd and panel. This was exactly what you hope for in any public conversation, that people will be engaged and engaging in their conversation, and it was a success by those standards.

Visiting the floor again was nice. I spent a little more time appreciating just how family friendly the convention is, and my timing was especially convenient for such. There was at the moment of our arrival, a kid-oriented cosplay competition, which was well attended, populated by a wide age range of children with a variety of different costume choices. On top of that, there is a kid’s corner at the front dedicated to letting kids have some fun, be that with replicas of famous sci-fi/superhero props, or with a host of games and toys. There was a speeder-bike from Star Wars available for picture opportunities, which I seized with my nine-month old daughter; she might not remember this, but I hope she appreciates the silliness and fun of the whole thing.

I spent a bit more time in artist’s alley on Sunday, which had decreased a bit in size, as some of the creators opted out for the day, but it was nice to pay a little more attention to what was there. There were a number of cool things on display, and I walked away with a coloring book by Justin Castenada, whose art style captures a delightfully child-like wonder. The good news is that he wasn’t alone. There were a ton of awesome local or regional artists there, and it looked like the community was pretty vibrant to support that, if only based on the roaming podcast we encountered that seemed intent on interviewing all of the artists there, or of all the folks willing to start up a conversation about their craft. It was nice.

Is there more that I would want from my experience at the DCCC next year? Absolutely! I was disappointed by the difficulty in locating the space, in the lack of any real headliners for the event, and the paucity of great deals of the sort that justify the cost of admission. If the convention continues to grow in size, which it did this year from last, it would benefit from having some big names to help bring in a more robust crowd, and to put Louisville on the map as a viable stop for creators on the convention circuit. There is a lot of promise and heart to the DCCC, and I maintain the highest hopes that it will only grow bigger and better with experience.