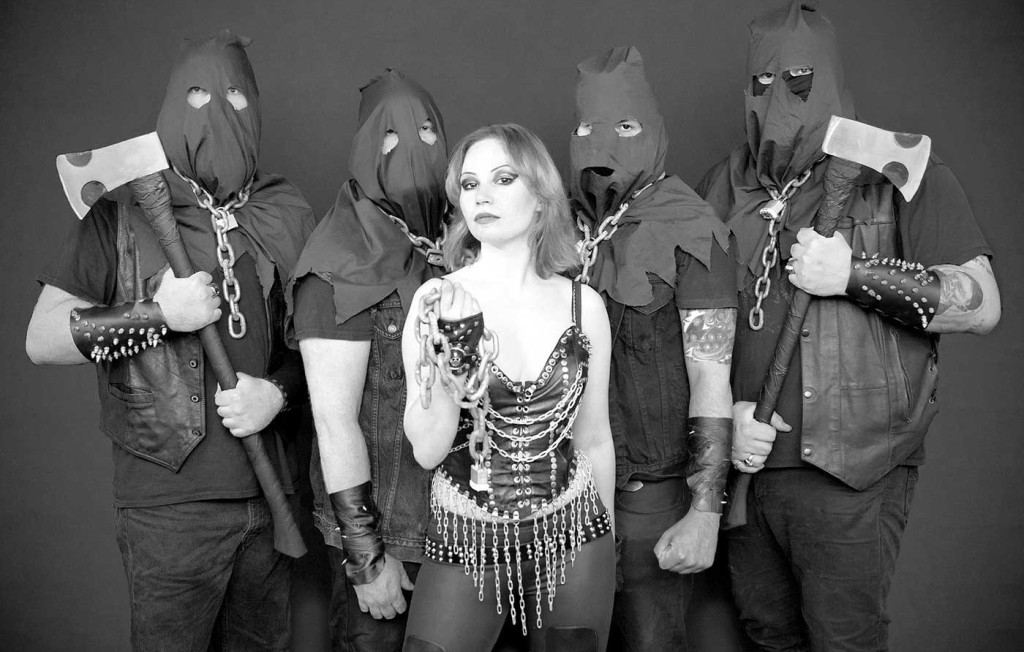 Louisville has always been known as a thriving music city, although, traditionally, the heavier music has revolved almost exclusively around punk and hardcore. In the last few years, a well-rounded and eclectic metal ecosystem has come to life, abounding in quality groups, from a wide spectrum of metal’s many sub-genres and styles. For those who may not be aware of all the great metal music in our fine city, here are eight local metal bands that you should know.

Order Of Leviathan
Order Of Leviathan is a newer band to our local scene, yet these black metal deviants have proven their mettle through countless spirited live performances and the release of an EP called “The Infernal Path To Total Darkness,” which came out last year. Continuing with the established theme of the Louisville metal scene being interconnected, it comes as no surprise that a lot of the songwriting and riffing was guided and created by Zak Denham, a key figure within Anagnorisis, who we’ll get to a bit later.

littledidweknow
As far as hybridized metal acts go, littledidweknow have shown themselves to be quite skilled in their ability to connect and unite various strains of metal into a cohesive ball of hatred and fury that has a real purpose and focus to it. They’ve been destroying  live venues across town for years now, finally dropping their debut full-length, “Lucid Happenings,” in 2013. The reception of which was not only well-received on a local level, but on an international level, as well. The band was soon signed to a Canadian/USA based label called Subliminal Groove Records and recorded and debuted a new single last year through their label called “Permagrin.” Since their signing in late 2013, the band has fully recorded a new EP called “Mindset,” but are enduring lineup changes that are delaying its release. (I have heard it and it’s incredible. I hope they get things sorted out and it gets released promptly.)

Dysphorium
Oftentimes metalheads merely want to hear something local played within their preferred style, creativity be damned, which isn’t necessarily a bad thing, per se. This is where Dysphorium come in —  they play a kind of middle-of-the-road melodic death metal sound. Yet, since no other group here is toying with similar ideas, it gives them a unique edge and identity in the local scene. The band recently dropped their debut record, “Conduit Of Darkness.” Since, they have been hard at work touring out of town — and state — in order to spread their unholy gospel of catchy riffs and slick melodies.

Savage Master
If you’re a fan of some old-school NWOBHM (that’s New Wave Of British Heavy Metal, for those unaware), in the vein of Iron Maiden and Judas Priest, then this is the sort of retro-minded throwback act for you. Savage Master aren’t trying to be the fastest, most complex or angriest, they simply choose to craft metal formed from the framework of its original founders and recognized early heroes. In this aspect, they succeed — even more so by the unique and shattering clean singing of Stacey Savage.

The Oedipus Complex
A big part of why our local metal scene has grown by leaps and bounds in such a short amount of time is due to acts that also include talented players from Indiana — a longstanding metal stronghold, for reasons I can’t explain or understand. The Oedipus Complex is Louisville-based, yet rounded out by some spectacular talent from Indiana that injects a healthy dose of personality and skilled songwriting into a technical and progressive death metal-minded framework. Having seen them live multiple times, I have enough faith in what they will inevitably record to recommend them to you.

Artwork For The Blind
Artwork For The Blind fit within a growing modern metal paradigm, where bands create within a postmodern and highly inclusive form of metal that blurs all genres in a way that generally gets referred to as post-metal. While the band certainly applies an everything-and-the-kitchen-sink approach, they are fairly rooted within death metal and groove-oriented metal with a thrashy bite to the riffs. Artwork For The Blind thrive on creating dense and unnerving stuff full of volatile transitions that has a caustic nature to it that always comes across wonderfully in a live setting.

Esoteric Burial
Esoteric Burial have proven themselves to be quite the interesting hybrid between death metal and black metal sensibilities, wrapped up in a progressively-minded songwriting inclination. Over the last year or so, many of the band’s new songs performed live have shown that the band has evolved considerably beyond their initial bestial and aggressivly-focused aims. While they’ve yet to release anything yet, I’ve heard enough of their music live, and I’m quite excited by the variety and depth of the material they’ve expertly showcased in a live setting.

Anagnorisis
Austin Lunn — the driving force behind the excellent one-man folk-influenced black metal band Panopticon, before he moved to Minnesota in 2012 to help start a brewery —  was one of the founding members of local black metal assassins Anagnorisis, though he left the group years ago. Fortunately, the band has survived and grown since his departure. In 2013, they reached critical acclaim with their full-length record, “Beyond All Light.” Anagnorisis are also phenomenal live performers and have been known to play their entire record from start to finish. I was lucky enough to see them do so once and it was a unique experience you wouldn’t want to miss.