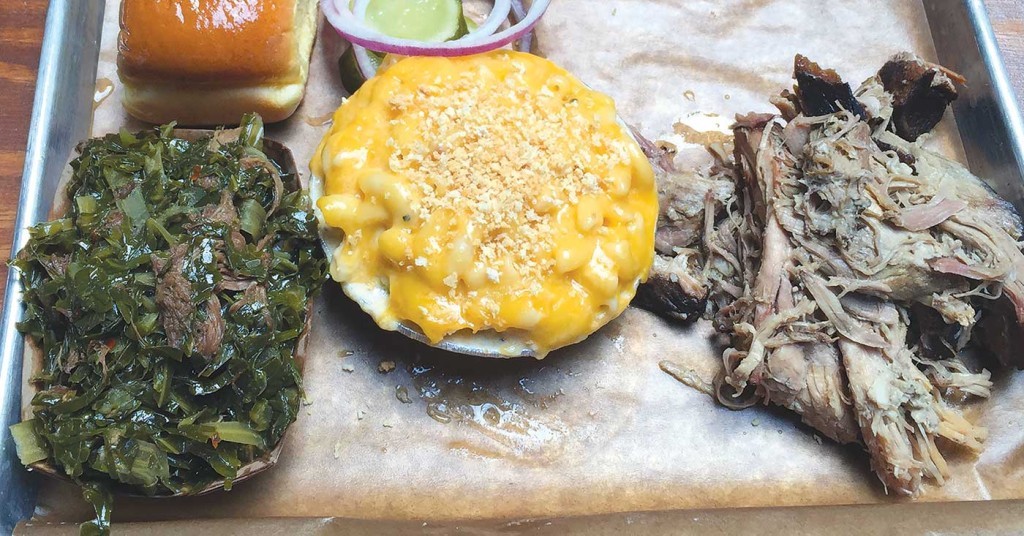 “Hey, let’s go over to the new Feast BBQ in NuLu and get some delicious brisket!”

A slice of gently smoked, tender brisket sounded good, or at least it did until I settled down at a long table in the back of the room and glanced up. There on the wall was a buffalo head, mounted like a game trophy. Was he real or fake? I’m not sure, but he looked pretty real to me. His fur was kind of scruffy, but his black glass eyes were soulful. They seemed to look right into my heart.

“Um, maybe not the brisket.”

I looked up and made bison eye contact again. His soft, gentle smile spoke of death and ashes.

I averted my eyes.

“In fact, now that I think about it, maybe I’ll have the crispy tofu.”

And so we did, and some pulled pork too, and lots of sides, and it was all good. What is barbecue anyway but protein gently bathed in cool smoke in the manner of the ancient Arawak Indians until it is cooked full of subtle, complex flavor, then served with spicy sauce to your liking? Does it matter whether your protein originated from a bison, a cow, a pig, a chicken or even organic GMO-free soybeans?

Well, maybe, but it’s all good at Feast, an outpost of Chef Ryan Rogers’ popular, three-year-old eatery of the same name over in New Albany (116 W. Main St., New Albany, 812-920-0454). The Louisville branch opened last winter, just before Christmas, in the quarters that had housed Cake Flour, which in its turn moved out to the East End on Lime Kiln Lane.

The building got a major renovation and, I’d say, a more NuLu-ish look, which nicely fits with the original facility’s old New Albany look. Multiple rooms show exposed-brick walls, and a serious full bar looks as if it had been there forever; you may take your pick of some 20 local craft beers on draft, creative cocktails or even a bourbon slushie, or a shot-and-a-beer for five bucks, if the spirit so moves you.

Heavy picnic-style tables are set with utilitarian buckets loaded with barbecue sauce in big squeeze bottles. The decor is quirky and fun, including old photos; a giant wall-mounted American flag, as big as Francis Scott Key’s but without the bombs-bursting-in-air holes in it; and, of course, that gently accusing buffalo head.

Service is straightforward: Line up at the entrance and place your order for food and drink (including bar orders), then take a number and a seat, vend your own fountain drink, and wait for your meal to be delivered on utilitarian metal cookware.

If you think of a barbecue joint as a place for really cheap eats, you may encounter a mild case of sticker shock at both Feast locations. Hey, it’s NuLu! We’re not talking four-star-level here, but “snacks” (appetizers, in generous portions) are $8 (for “loaded” tots) or $9 for pork cakes or fried pickles). Main dishes — all smoked meats, er, proteins, are $8.50 (for a smoked pork, chicken or tofu sandwich; brisket is $12.50) to $12 for a half-pound platter with two sides ($18 for brisket). You can buy it by the pound for $14 to $20.

As I expected, in the wake of happy experience at the New Albany shop, the smoking, the cooking and the table service are on point. Rogers’ team excels because they don’t slack on the small stuff. Not only the mains but sides, too, are prepared with care, and this attention shows.

That said, though, when we dropped by for lunch on a Tuesday, I think we caught some pulled pork that had been in the fridge since Saturday. It certainly was not spoiled, but “refrigerator taste” is hard to miss. Fortunately, a little extra tangy-sweet house-made sauce made everything right.

Except for that, the pork was fine, pulled into savory, not-too-fatty shreds. A half-dozen tofu planks were subtly smoky, deep-fried to a crunchy, appealing crust surrounding a firm, steaming interior.

But we still wanted brisket, so returned another day and sat in a different part of the room, away from the stuffed beast’s accusing eye. Indeed, the brisket (in a Mexican-style taco, $4.50) was just right, lean and flavorful, fresh from the smoker.  The tortillas were a little chewy.