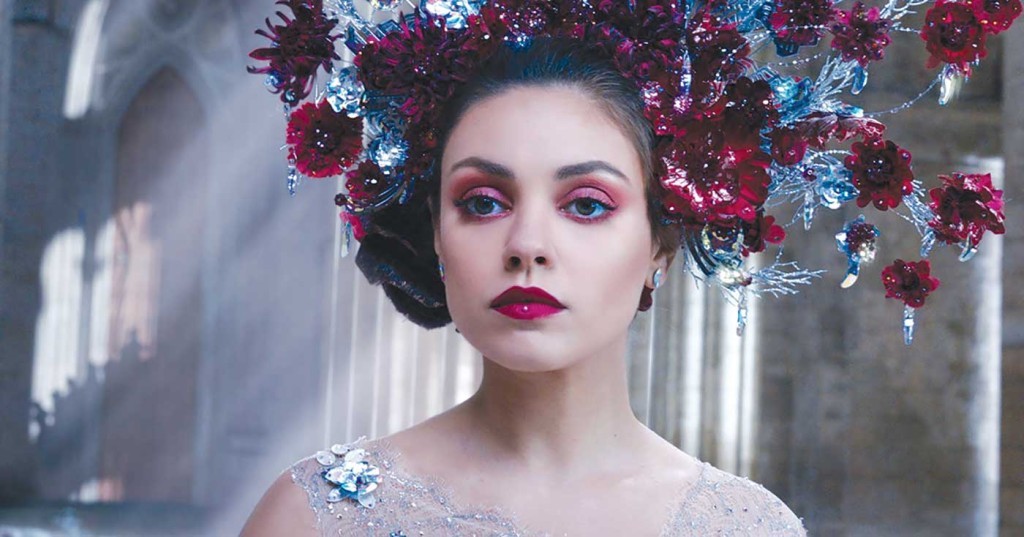 JUPITER ASCENDING
2015; $27.98; PG-13
This big-budget, big-star scifi-fantasy from The Wachowskis (“The Matrix”) didn’t exactly burn up the box office, but it’s not as bad as trolls have made it out to be. Mila Kunis is gorgeous as the titular genetic anomaly who may be the only thing that can save Earth from its intergalactic corporate owners (the Koch Brothers), and their lead hunter, Channing Tatum. The two fall in love, of course, which gets them a reprimand by HR. The rest of the cast is similarly first-rate, including Sean Bean, Eddie Redmayne/Tuppence Middleton from “The Theory of Everything”, and Douglas “Noah” Booth. Ridiculously over the top as only a Wachowski can do it, but we were entertained.

THE SPONGEBOB MOVIE: SPONGE OUT OF WATER
2015; $15.98-52.98; PG
While only moderately obsessed SpongeBuddies, we first salivated over this flick when we saw the 3D trailer. Something about seeing CGI-solid Bob and Co. in our “Reality” — crackin’ puns, doin’ dumb stuff, savin’ the world — really struck a chord. As if you should need it, the plot revolves (again) around someone stealing the secret recipe for Krabby Patties, requiring Bob to join forces with Plankton and entering our “real” world to get it back. The Greek Chorus of seagulls, voiced by Tim Conway, Eddie Deezen, Cree Summer, and Billy “Futurama” West is inspired. You have to see this thing!

1776
1972; $14.98-19.98; PG
It’s been over 40 years since Hollywood legend Jack L. Warner launched this musical version of the Founding Fathers, and it’s just now making it to Blu-Ray. A big-budget cast — William Daniels as John Adams, Howard Da Silva as Ben Franklin, Ken Howard as Thomas Jefferson, Blythe Danner as Martha Washingto — and lotsa show-stopping tunes lead to nifty dance numbers, just as it did on Broadway. To some, this is an every-4th-of-July staple, but it kinda looks like a 142-minute Simpsons sketch to us. Not that that’s a bad thing.

HAIKYU: COLLECTION 1
2014; $42.98; UR
Aka, “Haikyuu!!”, this is one of the world’s most popular animes, though exactly why is hard to explain. The plot concerns an average junior-highschooler who becomes obsessed with volleyball to the point that he assembles his own team. They get humiliated, of course, but his chance to shine comes again in high school — only to be thwarted again by the same nemesis. This escalates to a climactic net battle to end all battles. Corny, huh? Trust us: You’ll laugh, you’ll rage, you might even cry, all thanks to a flawless script, brilliant animation, and truly engrossing characters. A winner in every sense; we watched all 5 ½ hours twice in one sitting.

MONSTERS: DARK CONTINENT
2014; $22.98; R
2010’s groundbreaking indie “Monsters”, which posited the breakdown of Earth’s societies after an invasion of gargantuan space creatures who seem all but oblivious to our presence (except as food), returns here with even more “infected zones” and a completely new breed of menace. The first succeeded largely through it’s intimacy, focusing on two people against a lost world. This one is more militaristic, set in a Middle East populated largely by forced-draft combat troops who come to hate their slave-drivers/commanders more than the invaders. Still a rousing fight for survival in a doomed world, if less personal.

SCARECROWS
1988; $17.97-25.97; UR
One of our personal Guilty Pleasures ever since Job Bob Briggs introduced it on The Movie Channel’s late, lamented “Joe Bob’s Drive-In Theater.” Thieves steal an Army payroll, kidnapping a pilot and his daughter to fly them to Mexico — until one of them parachutes out unexpectedly with the loot! The others land and begin to track him, finding only a dark farmhouse and scarecrows in the fields. But wait! What’s this? The double-crosser is back; walking into the farmhouse of his own accord — even though he is dead, gutted, and stuffed with the cash! It gets weird from there. An original no-budget mess of a horror film, now on Blu-Ray.

SHE MUST BE SEEING THINGS
1987; $17.98; UR
This famous fem-flicker first appeared on our shores during the VHS era, and has just now made it to DVD. An early hit among the then-organizing Lesbian community, it tells the wonderfully odd story of two lovers, a lawyer and a filmmaker, the latter of which quietly suspects the former of infidelity, recording her worries in a diary, which the lawyer reads. This dissolving dynamic spirals slowly out of control, eventually leaking into their professional lives. Despite having no actual nudity or sex it caused an outrage in 1987: the very thought of two women in a sexual relationship sent anti-porn crusaders of the day into a frothing fit. A lost classic restored; check it out.

*** More Recommended Videos for our On-Line Readers, Only!
[REC]4: APOCALYPSE
2015; $17.95; R
The fourth and maybe-final chapter in the Spanish horror franchise that spawned the American “Quarantine.” The only survivor of the grotesque demonic virus, TV reporter Manuela Velasco, is spirited away by authorities and held in the bowels of a oil tanker for “examination.” Not the best of the series, but much better than any of the Anglicized versions.

EASTERN BOYS
2013; $19.98; UR
A complex Gay-themed film-festival hit from France about a staid businessman/asshole (veteran actor Olivier Rabourdin) who picks up a starving young Ukrainian male prostitute (Kirill Emelyanov), trolling the train station. Their afternoon in the man’s apartment is interrupted by the prostitute’s gang, who force their way in and … well, it gets complicated from there as the two have since developed a certain understanding.

EAT WITH ME
2014; $24.98; UR
Mature Ms. Emma (Sharon Omi from “How to Get Away with Murder”) walks out of her long-time marriage and into the life of her estranged Gay son in this very popular dramcom. He is a chef at the family’s failing restaurant, begrudgingly forced to make room for this disapproving, intolerant woman while his career collapses around him. But that’s just window-dressing: The movie is a treatise on intimacy, using food/eating to illustrate how insignificant words can be – after all, don’t we fill our mouths with food at every social occasion? Watch for George “Mr. Sulu” Takei in a cameo.

JUSTIFIED: THE COMPLETE FINAL SEASON
2015; $34.98-39.98; UR
The fan base for this excellent Timothy Olyphant vehicle about the tribulations of a U.S. Marshal (Olyphant) assigned to clean up his boyhood home in the wretched coal fields of Eastern Kentucky, is on the verge of rioting. Why? Because, the long-anticipated showdown between the Marshall and his nemesis Boyd (Walton Goggins) occurs less than 20 minutes in. And what fills the rest of the hour? Well, lets just say that, as with much of Season 6, it revolves around Ava (Joelle Carter). We won’t spoil it here except to say that it is intense.

KNOW HOW
2015; $24.98; UR
A raw, angry, and completely authentic look into the lives of young people raised in the NYC foster care system – written by and starring five young people from NYC foster families! Actually, that’s not true: while there is some anger, this is not a violent diatribe against society. The emotions are more sensitive and internal as the kids ask “What did I do to deserve this?” and “Do I have worth?”, or more frequently, “What can I do to prevent others from feeling this way?”. The kids aren’t down on themselves or their foster-families, they simply want what everyone wants: love and acceptance. Powerful and real; will haunt you for days.

MCFARLAND, USA
2015; $22.98; PG
Kevin Costner’s latest vanity project is based on real events: A HS cross-country coach builds a successful team out of poor, unmotivated young runners, most of them Latino farm workers. Their growth into dedicated, accomplished athletes changes the young mens lives, and they in turn change the world around them – including that of the coach, whose personal and family problems had him on the verge of despair. Kostner is good here, but the story is the star. Recommended.

NEW WORLDS
2014; $24.98-39.98; UR
During the 1680’s, Britain’s King Charles II (Jeremy “The Tudors” Northam) decided it was time to expand the empire and tighten his grip on the populace. Bands of the less-well-equipped fought back, leading to one of the bloodiest periods in Western history. This historical potboiler stars Jamie “50 Shades of Grey” Dorman and stunning Freya “Skins” Mavor as a pair secret lovers who plot to dull the king’s plans through bedroom intrigue. Meanwhile, aristocratic Joe “Game Of Thrones” Dempsie falls hard for striking settler Alice “Beautiful Creatures” Englert in this clothes-on horny historical potboiler as only the BBC can do it..

SMILING THROUGH THE APOCALYPSE
2013; $19.98-27.98; UR
Love him or hate him, gutsy Esquire magazine editor Harold T.P. Hayes proved that America wanted more than cookie-cutter publishing, and set out to reinvent what it meant to be a free society — opening the door to the dirty-rag journal you now hold in your hand. It was the Swingin’ 60s, and while many had heard the names Nora Ephron, Tom Wolfe, and Gore Vidal, such luminary literary lights were justnotes in the news until Esquire put them and their work within reach of white-picket-fence suburbia, giving birth to today’s media-savvy America. This doc takes us on a journey into the soul of our own culture.

THE POPE OF GREENWICH VILLAGE/DESPERATE HOURS
$24.95; UR
A simply terrific Blu-Ray pairing of two Mickey Rourke flicks. The best of the two is 1984’s comic crime caper, “Greenwich”: Rourke and cousin Eric Roberts (who is actually very good here) are small-time hoods who screw-up big-time, and end up owing Da Mob a butt-load of moo-lah. Features the best cast of any movie we can think of, a score filled with Sinatra, plus the now-famous “thumb-cutting scene.” The second, from 1990 and directed by Michael Cimino, is darker and more dramatic, co-starring Anthony Hopkins, Mimi Rogers, scary David Morse, and gorgeous Kelly Lynch from “The L Word.”

THE TAKING OF TIGER MOUNTAIN
2014; $14.98; UR
The Chinese Civil War of the late 40’s has been the topic of many great movies in the last decade. Here master action-director Tsui Hark takes a look at one particular event, torn from the pages of a famous historical novel: The routing of a brutal warlord (Tony Ka Fai Leung, “A Better Tomorrow”) from his mountain fortress. Beyond the battle itself, this action requires spies (including Hanyu Zhang from “The Chef, The Actor, The Scoundrel”), intrigue and, of course, a doomed romance with waiflike newcomer Liya Tong. No one tops Hark in this genre.