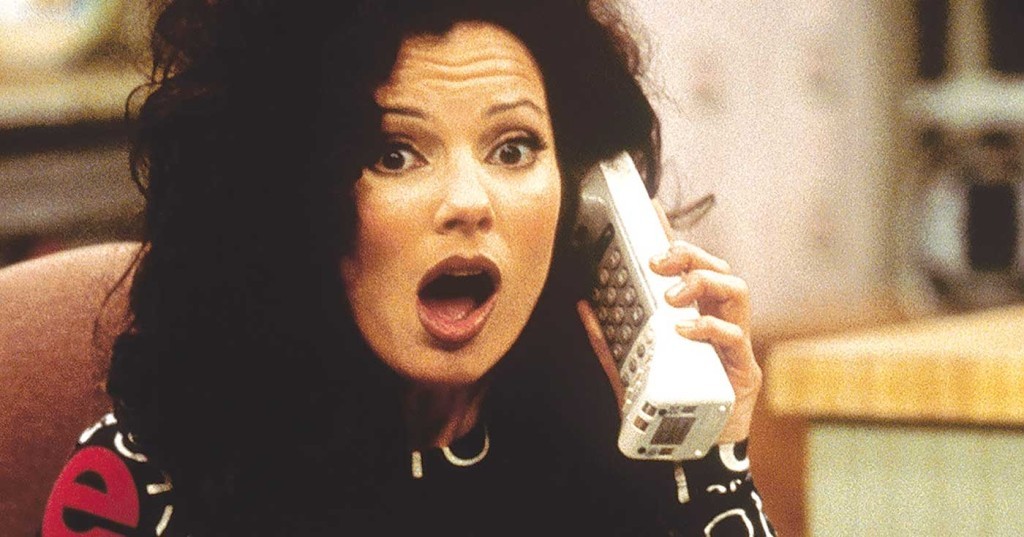 THE NANNY: THE COMPLETE SERIES
1993; $94.98; UR
Okay, we admit it: Fran Drescher has a voice like fingernails on a chalkboard, and the idea that a millionaire Broadway producer (Charles Shaugnessy) would hire her to raise his children is beyond the pale. So why do we love this damned show? Because it was arguably the last vestige of Borsch Belt humor on the tube, an American comic tradition that included Milton Berle, Phil Silvers, “Barney Miller,” “Night Court” and “M*A*S*H.” With co-stars Daniel Davis as the butler Niles (recently seen in a corpse-cameo on “Gotham”), teen Nicholle “Maggie” Tom, late of “Masters of Sex,” and Madeline “Beta” Zima as the girl-child. All six seasons, 146 nasal, screechy episodes, plus several new commentaries.

THE SAINT: THE COMPLETE SERIES
1962; $149.98-199.98; UR
There have been a number of actors to portray Simon Templar — international playboy, bon vivant and charming man of action — but none compares to Roger Moore, who embodied author Leslie Charteris’ modern-day Robin Hood in 118 glorious episodes spanning the wild ’60s. Simply put, Templar is a thief … a thief who steals from other thieves. And then he usually gives the money to someone who needs it. And he usually does it without violence. Usually. A sublime mix of debonaire action, sly intrigue, breathtaking women, clever humor and surprise guest stars. And yet, it’s unlikely that any reader of this rag has ever seen a single episode! A crime against humanity. Let’s fix that, OK?

AMAZING SPACE
2015; $24.98; UR
This is what used to be called a “tripper”: a music-driven ride filled with beautiful, ethereal imagery; second cousin to the Rauch Planetarium’s inglorious “Dark Side Of The Moon” shows. Here the visuals are cutting-edge: real celestial visions courtesy of the Hubble telescope; deep, rich colors spawned in the birth of the Universe. The perfectly-matched music comes courtesy of Kristin Hoffmann, most famous for her “Song for the Ocean.” Whether you’re into dance, yoga, weed or — like us — just letting your mind free, you’ll like this.

GUN WOMAN
2014; $14.98-24.98; UR
International social media has been abuzz over this Japanese revenger for the past year, now finally available on video here in the states. It tells of a doctor who vows revenge after his lovely wife is killed by a psychotic millionaire. But the killer is untouchable, so he kidnaps a young woman (the beautiful Asami from “The Machine Girl”), and trains her to be his super-assassin — surgically implanting the pieces of a gun throughout her body! She must enter the target’s compound, painfully cut the bloody parts from under her skin, and assemble them to survive. Yep, it’s just as crazy and outrageous as it sounds. Enjoy.

HILL STREET BLUES: SEASON 5
1984; $34.98; UR
Season Five contains the famous “Rookie Nookie” episode wherein (1) a female clerk locks herself in the Men’s Room after a cop clumsily flirts with her, (2) officer Kiel Martin spends the night with carjack-victim Martha Ferris — while her husband is being murdered — and (3) rookies Tim Robbins and Michael Biehn come aboard, with Robbins tied up and forced to endure the pleasures of a prostitute while the rest of the rookies watch. Could we make this up? (And watch for Actors Theatre of Louis ville alum Bruce Weitz as Sgt. Mick Belker.)

STUDENT COUNCIL’S DISCRETION 2
2015; $34.98-59.98; UR
The “Level 2” season of this wildly successful, self-referential look at anime and pop culture finds our hero/narrator Ken continuing his fantasy bid to turn the girls of the Hekiyou Private Academy’s Student Council into his own private harem. It’s a wank-dream, of course, as these big-eyed beauties are wise and calculating beyond their years. That’s not to say they’re not interested, of course. Wildly addictive, careening between reality and fantasy as Ken continues to weave his imaginative stories.

SWORD OF VENGEANCE
2014; $14.98-29.98; UR
An over-the-top indie low-rent bloody-sword revenge flick, filmed in Serbia, starring Frenchman Stanley “Borgia” Weber as the silent “Shadow Walker.” Our Mr. Walker is apparently the only man manly enough to roust the evil Norman tyrant who is persecuting the good Saxonfolk. Plus, he has a handy medieval code of honor that requires him — yes, REQUIRES him — to do so with the maximum amount of pain and bloodshed. Really handy for moviemaking, that. oh, and Annabelle Wallis from “Annabelle” does a nude sex scene. What more could you want?

BALLET 422
2014; $22.98-29.98; PG
A performance-doc on the creative process behind ballet, focusing on young NYC Ballet choreographer, Justin Peck, as he struggles to bring his vision to the stage. Nicely free from “talking head syndrome”, which bogs down most art-docs, the filmmakers watch him do his job simply and naturally, with little-to-no intrusion. Clever readers of this column (support groups standing by) may recognize lead dancer Tiler Peck, who had a small role in 2001’s “Donnie Darko.”

DA SWEET BLOOD OF JESUS
2014; $22.98-26.98; UR
Funded on Kickstarter, this small Spike Lee effort is an update of the the 1973 blaxploitation horror-comedy “Ganja & Hess” (a truly unique film which we highly recommend). Stars Stephen Tyrone Williams as Dr. Hess Greene, who becomes the bloodthirsty pawn of a mysterious artifact – but not a vampire in the Bela Lugosi sense. This leads to a series of very dangerous liaisons with Zaraah Abrahams (nice work if you can get it). Entertaining, if cheaply made, the focus is on addiction, helped by a cool Jazz score.

DELIRIUM
2012; $24.98; UR
There have been at least 10 movies with this title in the last 2 years alone. This one stars young Taylor Pigeon, who pops up on “Conan” (O’Brien) from time to time, as a missing child suddenly returning home with supernatural baggage in tow. Yeah, it’s been done before, but this is far more understated and mature than usual – with a slam-bang finish, of course – plus an extremely photogenic cast that includes sultry Jolene “Goldilocks” Kay, dark Shalaina “The Maze” Castle, and French Vogue cover girl Melissa LeEllen from “Drop Dead Diva.”

MURDOCH MYSTERIES: THE MOVIES
2015; $24.98-39.98; UR
These gorgeous BBC offerings actually preceded the current hit Brit/Canadian TV series, setting the stage for its incredibly entertaining 9-seasons-and-counting run. Peter “Orphan Black” Outerbridge plays Det. Murdoch here (replaced in the series by Yannick Bisson), as the bright, energetic man of science who uses the then-unknown techniques of forensic analysis to cleverly reveal murderers — and seriously annoy his contemporaries — in 1890’s Canada. Watch for Colm Meaney, Keeley Hawes from “Upstairs Downstairs”, and Ettie Weston; with Flora Montgomery as his Watson and a cameo by William B. Davis, the “X-Files” Smoking Man.

SEE YOU IN VALHALLA
2015; $13.98-20.98; R
“Modern Family”s flirty little Sarah Hyland, co-stars in this low-rent dram-com about a group of sibs who get together when their brother dies, arguing over his final request: to be given a real Viking funeral, complete with flaming boat.

WELCOME BACK, KOTTER: SEASON 3
1977; $29.98; PG
As regular readers know (support groups standing by), we love this hoary old sitcom set in a blighted inner city highschool. Season three is one its best, highlighted by the 3-part arrival of the Kotter’s (Gabe Kaplan and Marcia Strassman) baby – or is it babies?! – while the character of Vinnie Barbarino (young John Travolta) inches front-and-center. The show’s writers go all out for a too-rarely seen Christian/Jewish holiday mashup, “A Sweathog Christmas Special.” Some of the best TV ever made.