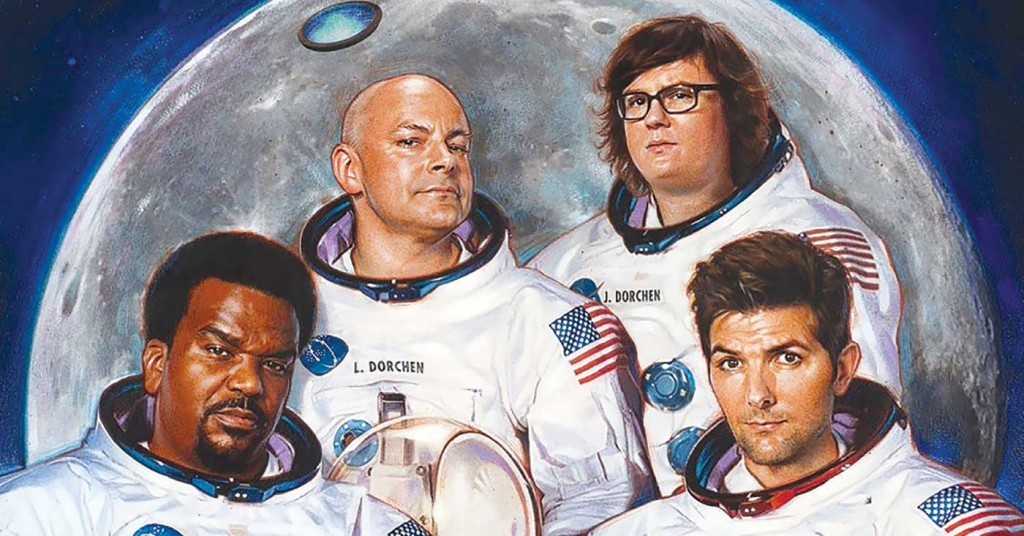 HARLEY DAVIDSON AND THE MARLBORO MAN
1991; $15.88-24.99; R
All but forgotten today, this is one of the most entertaining and noteworthy movies of the last quarter-century. Mickey Rourke and Don “Miami Vice” Johnson play the titular barflies who commit a robbery to help out their bar-owner friend, only to wind up in the sights of both an insane drug-mob and a pack of psychotic criminal banking execs (or is that redundant?). Yeah, it’s trash, but it’s good trash, co-starring cute little Chelsea Field, Daniel Baldwin, Giancarlo Esposito, Vanessa Williams, Robert Ginty, Tia Carrere and Tom Sizemore, just to name a few. The requisite biker-movie gratuitous female nudity is provided by Chelsea, Mitzi Martin and Bobbie Tyler. The perfect ’Merican film, now available on Blu-Ray.

HOT TUB TIME MACHINE 2
2015; $19.98-39.98; R
This followup to the surprise-hit adult-male fantasy-comedy doesn’t have quite the wit of the original — and we missed the ’80s music — but it gets by on energy and a great cast. John Cusak bows out this time, leaving Rob Corddry, Craig Robinson, Clark Duke and newcomer Adam Scott to time-travel into the future in order to save the past (i.e., “today”). Luckily, before you start to notice how insanely vapid the whole thing is, they unleash the amazing naked breasts of Bianca Haase, Crystal Lowe and Christine Bently. Boy howdy! Now we got us a movie! Lots of guy-fun with blonde cutie Gillian “Community” Jacobs, and Chevy Chase as the Hot Tub Repair Guy.

OTHER DVDs of INTEREST

AMERICAN SNIPER
2014; $14.98-44.98; R
This wildly successful bio-drama on the life of Navy SEAL Chris Kyle clearly struck a chord, particularly with American service veterans, many of whom felt that the movie honestly portrayed the personal toll of taking another person’s life in service to our country. Bradley Cooper completely inhabits the role as Kyle serves multiple tours in the Middle East, assassinating at least 150 people with his supernatural marksmanship. But when the fighting is over, he finds it impossible to step back into a “normal” life with wife Sienna Miller, and no one — except other vets — can understand why. Directed by Clint Eastwood.

BRITAIN’S BLOODIEST DYNASTY: THE PLANTAGENET
2015; $27.98-39.98; UR
Most Americans are surprised to find that author George R. R. Martin’s “Game Of Thrones” was inspired by real-world events, such as the chaos following the death of the last Plantagenet king. The Plantagenets were one of the wealthiest families ever known on Earth, owning vast lands which they governed through their own private, brutal army. Free from all law and lasting for over 300 years, their reign finally fell apart when Richard III was killed in 1485. This excellent 4-part series from the BBC showcases all the power, horror, excess and unbelievable cruelty of one power-mad family, the way it shaped the political globe of today, and the many ways that their legacy lives on in our daily lives.

LEVIATHAN
2015; $27.98-34.98; R
A Russian drama about the owner of a small business on the shores of the Barents Sea, fighting for his family and his livelihood as the town’s evil mayor relentlessly schemes to take it all away. As the mayor’s actions become increasingly aggressive – to the point of using the man’s fractured relationship with his adult son — he can only quietly persevere and hold ever more tightly to the values and unearthly-beautiful land that he loves. Won a Golden Globe for Best Foreign Language Film of 2014.

ORANGE IS THE NEW BLACK: SEASON 2
2014; $27.98; UR
Taylor Schilling leads an amazing cast as 30-something Piper, sentenced to prison for helping out her druggie girlfriend a decade earlier in this damned-funny Showtime blockbuster fueled by great writing and truly interesting characters, all based on/inspired-by true events. And lesbian sex. And nudity. Lots of sex and nudity. With Laura Prepon. Ummm. And Natasha Lyonne. Right there, honey; ooh. And Taryn Manning! Go, Baby! Go! … Uh, where were we? Oh, yeah: the season opener, directed by Jodie Foster, finds the nearly unconscious Piper being hauled out of solitary and stuck on a plane bound for … well, we won’t spoil it. Entertaining as hell.

SEEK
2015; $24.99; UR
This gay drama goes beyond the tired “looking for love” storyline to examine a greater longing in gay society: acceptance. Not of their orientation or their “lifestyle,” but the simple acceptance that gays are human beings trying to get by, just like any other. In this case, what drives writer Adrian Shepherd-Gawinski is the need for acceptance by a high-profile club promoter he is profiling. With it would come entry into the seemingly fabulous world of bright lights, beautiful people, power and upward mobility. Uh, did we just write “fabulous”? Sorry.

This Matt “Friends” LeBlanc vehicle is about what you’d expect: watchable light fare; buoyed by the presence of Ali “Heroes” Larter as the would-be love interest and Adam “CSI: Miami” Rodriguez as his best friend. Matt is just an average guy; reasonably happy, if lacking that special someone in this life. The problem? Every time he makes a love connection, he goes completely insane with jealousy and suspicion. We’ve all been there, man. Larter makes a great foil for his shenanigans, with Chevy Chase in a cameo.

Considered by many to be the father of modern martial-arts anime, this 1993 blockbuster made it’s first appearance on Blu-Ray in 2003, and those copies are still traded among fans for $50 or more. Young swordmaster Jubei takes on an army of superhuman warriors bent on conquering Japan, each possessing a different hidden power. Exciting, bloodthirsty, and surprising – and this lower-priced repackaging seems to have cleaned up some technical grumbles, appearing much cleaner and more fluid than earlier releases. Highly recommended.

George Lucas supposedly dreamed up this fractured CGI fairy tale, but left the fun parts for more clever minds to flesh out. It’s clearly inspired by “Midsummer Night’s Dream”, as colorful fairies and gnomes squabble, sing, and comically seek a powerful potion. But the real treat here is all the voice talent, including Alan Cumming, Evan Rachel Wood, Kristin Chenoweth, Al Molina, Bob Einstein and Peter Stormare, just to name a few. Some fun music and action, if a bit gushy-romantic for some tots. We liked it anyway, or as The Bard put it, “and yet, to say the truth, reason and love keep little company together nowadays.”