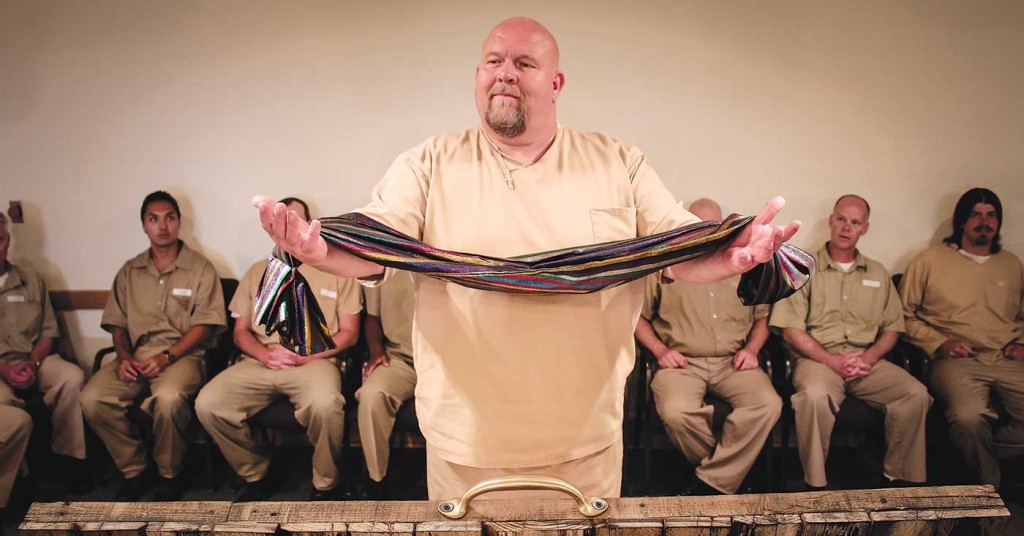 It’s a longish drive out to the Luther Luckett Correctional Complex, and I was feeling pretty pessimistic about this season’s Shakespeare Behind Bars (SBB) production of “Pericles, Prince of Tyre.”  A few days earlier, I’d read the play (for the first time) and had come away — like generations of critics — with the impression that it’s a mediocre mishmash that barely belongs in the Shakespeare canon.

A couple of hours later, I came away thinking (not for the first  time) that plays are meant to be seen, not read. Director Matt Wallace and a well-honed cast (nearly all playing multiple roles) and crew had given us a vivid, clarifying production that persuaded me that “Pericles” is an adventurous morality play for our time. Its hapless hero is an upright nobleman who roves through the eastern Mediterranean encountering personal and institutional corruption, shipwrecks and the loss of all he loves. The action sprawls across two decades, touches on issues like starvation, and human trafficking, and, by the end has nearly — but not quite — broken the hero’s will to survive.

The play opens with an introductory monologue by Gower, played by Jerry Guenthner, a charismatic one-man chorus who serves throughout the play as our guide to both the action and the moral landscape. He’s a stellar guide, welcoming us with a smile and open arms — until his voice falls into a gruff rumble of disapproval as he warns us of the sin that sets the play in motion.

Pericles (John Snyder in a performance that stays centered in the hero’s nobility even through all of his setbacks) has come to Antioch in hopes of marrying — but as he gradually realizes that the gruff-spoken King Antiochus (Michael Malavenda) and his Daughter (Charles Young) have long had an incestuous relationship, his adoration turns to shock and horror in a beautifully acted transformation, and he flees — with Thailiard, a sinister, rationalizing assassin (Jeremiah North) on his trail.

Back home in Tyre, we get our first glimpse of Pericles as a leader, a man who deplores flattery and insists that his counselors give him candid advice. And his most trusted hand, the canny, calculating and supremely loyal Helicanus (played with glittering intellectual energy by Hal Cobb, who returns to play one of the most deliciously silky villainesses in Shakespeare), advises Pericles to get out of Tyre.

Next the action moves to Tarsus, where the Governor, Cleon (Stephen Marshall) and his wife Dionyza (Hal Cobb again) preside over a city afflicted by famine (an effective staging finds Cleon and Dionyza talking about the plight of their people and hoping that other cities will hear of their plight and come to their aid while cloaked, faceless figures huddle shivering at the side of the stage). It’s Pericles, of course, who shows up to relieve the suffering in a generous act of diplomacy.

This production was staged in the chapel at Luther Luckett. It’s not a true theater, but that was no impediment to the ingenuity of the production, which benefited from Tom Suleski’s sound design, Ryan Hardin’s light work and sound board work, and Donna Lawrence-Downs cunning costumes, which helped organize the many roles.

In the next scene, an enormous storm (streaming blue fabrics to express the turbulent sea and whooshing winds to evoke the storm) sinks Pericles’ ship and casts him adrift at Pentapolis. Here, for the first time, he encounters a just and happy society where the King, Simonides (played with gleeful elan by John Sheesley), his daughter Thaisa (William Whitehouse, in an elegant performance) and even the local fishermen (Conner Galenski, Stephen Haynes and Glenn Guntle) live in harmony. Happily, a jousting tournament is in the offing (a nifty, comically projected shadowplay with plenty of romping fun), and Pericles manages to win the hand of Thaisa.

Pericles, the pregnant Thaisa and her nurse, Lychorida (George Cohen), set off for home, but during another tumultuous storm Thaisa appears to die in childbirth (a poignant piece of acting by Cohen sets the tone). After setting Thaisa’s body adrift in a coffin, Pericles lands at Tarsus out of fear that the newborn Marina won’t survive the journey.  Pericles entrusts Marina to Cleon and Dionyza and returns to Tyre.

Thaisa’s coffin washes up on the shores of Ephesus, where Lord Cerimon (Charles Young) to the surprise of the Ephesians (Robert Meadows and Michael Malavenda) revives Thaisa, who enters the temple of the goddess Diana (Glenn Guntle, in gleaming glory).

Meanwhile, Hal Cobb’s jealous Dionyza plots to kill the beautiful Marina (James Prichard) who escapes only because she’s been seized by pirates who take her to Mytilene and sell her into a brothel run by a colorfully wicked bunch of rapscallions including Pander (Stephen Marshall) and the pitch-perfect Bawd (Roderick Blincoe). In an extraordinary piece of writing and acting, Marina debates the morality of trafficking with Lysimachus (Stephen Haynes) and manages to save her chastity.

Eventually, the grief-stricken Pericles and his entourage, including a sailor who serves as messenger (Stephen Riddle) show up in Mytilene, and a set of rapturous reunions closes the proceedings in a state of tearful rapture.

A plot synopsis can’t do the play justice, but the production (and Gower’s commentaries) captured what I haven’t: that the place names are surrogates for a moral landscape, and that truth, faith, loyalty and charity are powerful avenues of hope.

For information about Shakespeare Behind Bars, its remarkably low recidivism rate, and to learn how you can support the program, connect to shakespearebehindbars.org.

Basil Kreimendahl’s “Sidewinders,” which runs in a Looking for Lilith Theatre Company production through May 23, is a witty, gender-bending western directed by Kathi E. B. Ellis that capitalizes on the wild humor that often goes undiscovered in plays that fall in the absurdist camp. Gunslinging Dakota (Jane Embry Watts) and Bailey, who might or might not be a Civil War veteran (Laura Ellis) are preoccupied with the mysteries of undefined genitalia because after all, life is confusing if you don’t know the answer to the fundamental question, “Who should I fuck?”  Their musings give way to comic fireworks of the first order when Sandy (Alphaeus Green, Jr.) shows up with a wagon load of baggage. And then comes Sam Crystian Wiltshire), a doctor who can, it seems, fix all these genitalia problems. It’s a wild farce. (Costumes by Typh Hainer Merwarth.)