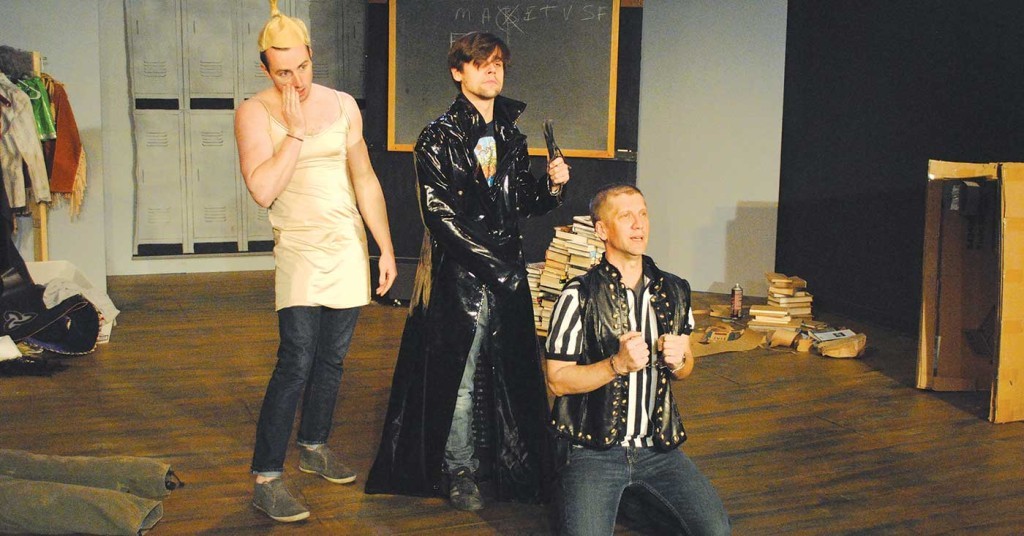 It’s a student’s worst nightmare. Graduation is 90 minutes away, and you have one last chance to fulfill all the requirements required to earn the diploma. And it turns out that your last chance is a remedial course in literature, taught in the gymnasium by a team of teachers that includes an irascible coach (Scott Davis), a pedantically prissy drama teacher who is famous for his controversial production of “The Music Man” (Dale Erwin) and an enthusiastic student teacher (Jax Howie) who knows most of these books through film adaptations.

As nightmares go, this one is quite droll. The class, taught by The Alley Theater, is called “All the Great Books (abridged)” and uses a curriculum designed by Reed Martin and Austin Tichenor of The Reduced Shakespeare Company.

No surprise, then, that the class kicks off with a soap opera-style dramatization of “Great Expectorations” by “America’s greatest novelist,” Charles Dickens (with references to everything from “Days of Our Lives” to “Twin Peaks,” continues with Howie’s tribute to one of the world’s greatest poets, Dr. Seuss (“I will not do it, in a boat. I will not do it, with a goat …”)  and then runs rampant through a quirky canon.

There is a lot to like about The Alley Theater, including the fact that you can munch on fresh popcorn and sip craft beer while you take in a play. More importantly, though, the company thrives on scripted productions that don’t feel like “productions” at all, but rather like spur-of-the-moment improvisations with plenty of audience involvement. Here, the audience walks in to find Coach Davis (clad in a referee’s striped shirt), reading silently on stage amongst gymnasium detritus (and piles and piles of literary detritus). The class starts with a recitation of the Pledge of Allegiance (the this-phrase-optional version, for folks who prefer to skip the “under God” clause). Occasionally one of us students is called on for a quick answer, and, of course, there’s a quiz at the break (so pay attention).

It’s not so much that Davis, Erwin and Howie break through the fourth wall, as that they simply eradicate it. You could just as well be sitting in their living room riffing on literature as seeing a play, and if an audience started interjecting questions or opinions — comedy-club style — these folks would just happily play along.

Of course, this production does benefit from a madcap script that finds new life in  old-fashioned gags. When the canon is accused of leaning toward dead white men, Erwin, points out that Alexandre Dumas was black. Howie objects, arguing that the proper term is “African-American.” And when Erwin points out that Dumas was French, Howie says, “Franco-American, then.”

And later, when Coach Davis heads to the whiteboard to diagram the action in “Little Women” in terms of football strategy, nearly every athletic cliché imaginable gets mashed up and mangled.

Do-it-yourself props and costumes add to the fun. Howie’s  “action-packed” solo interpretation of Henry David Thoreau’s “Walden” depends upon a red fishing pole — but then Davis offers a reinterpretation filtered through the buggy eyes of Franz Kafka’s Gregor Samsa. And a few minutes later Erwin gives a dramatic recitation of “Don Quixote” – in the original Spanish, as translated (loosely, one might say) by Howie.

The play reaches its literary climax in a truncated epic, a dramatized version of “War and Peace” that somehow manages to incorporate references to dozens of pieces of literature — and those that don’t show up there get treated in a bravura rapid-fire sequence at the end that finds Davis and Erwin offering prompts, and Howie giving one phrase summations of book after book.

All in all, it’s a classic Alley Theater entertainment, fast, smart and funny. If you’re looking for a 90-minute escape that will send you out of the theater smiling, this will do the trick.