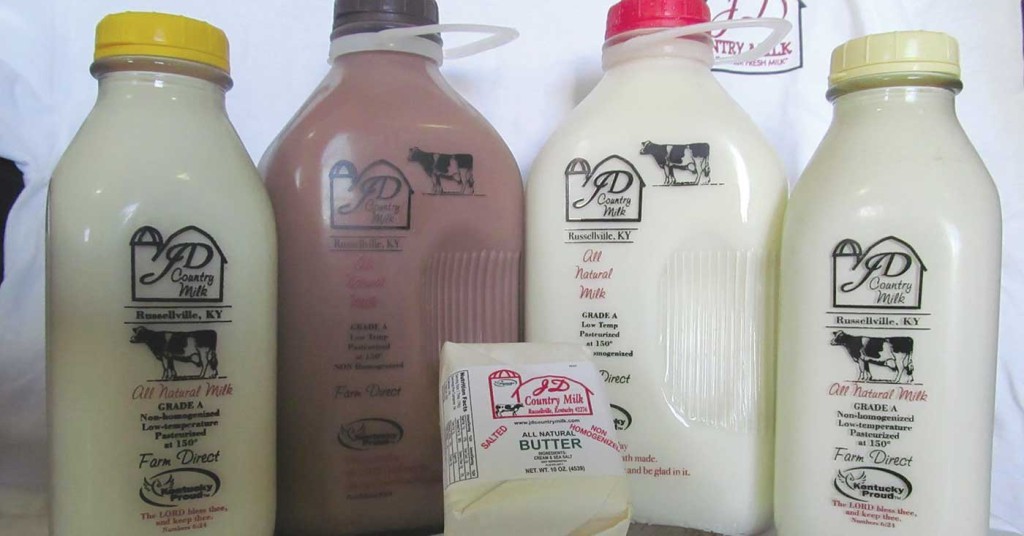 Edna Schrock and her husband Willis didn’t expect to become dairy farmers when they settled in Russellville, Kentucky, in 2006. They moved their family from Illinois with the dairy cows that fed their eight children, all of whom share the initials J.D. Then, the Schrocks opened a bakery.

As the JD Bakery & Cafe grew, the Schrocks began selling baked goods at the farmers market in Bowling Green, and there, news of the Schrock’s grass-fed, hormone- and antibiotic-free milk spread. “People asked why we didn’t bring our milk. So, we looked into it,” says Schrock.

Kentucky is home to many commercial dairy processors, including Dean Foods in Louisville, and its rural areas boast specialty on-farm processors that craft cheeses from Kentucky dairy. However, Schrock says that JD Country Milk is currently the only on-farm, pastured, fluid milk processor in the state, supplying local retailers like Whole Foods, Lucky’s Market and Green BEAN Delivery.

At first, the family milked its own cows, but demand from customers grew quickly at the farmers market. Today, the family sources raw milk from over 100 pastured cows at three neighboring farms. Two of the farms are GMO-free, and the third is working toward the distinction. Schrock says about 75 percent of the cows’ diet is from pasture. They’re supplemented with 25 percent grain feed to sustain milk production.

The company maintains strict quality control throughout processing and delivery of its products by employing the family, plus one trusted friend. It’s a tight-knit group that has built a thriving business on its own food philosophies. As a fledgling business, the Schrocks filled a niche market, but eight years of controlled growth has piqued widespread interest. JD Country Milk takes calls each week from stores looking to stock JD products, and Schrock admits that if they’d started the business 10 years earlier, it wouldn’t have taken off.

“People are looking for real food. They want to know what it is, where it came from, and how it’s handled,” says Schrock. She further explains why people are buying commercial organic milk. “People want organic for hormone- and antibiotic-free.”

JD’s milk products appeal to the organic buyer, but for the milk to become a certified organic product, the Schrocks would have to raise the price of the milk to a price that’s not affordable for many people. Schrock is committed to producing a high-quality Kentucky Proud food that’s reasonably priced for all people. “When we started, we were concerned about our own family’s health, and now we want to help more people be healthy and have access to healthy milk.”

Commercial organics are often ultra-pasteurized to maintain a shelf life of two months or longer. JD Country Milk is pasteurized at a lower temperature, heated between 145 and 150 degrees for 30 minutes to protect the milk’s natural flavor and enzymes. Because the enzyme that aids in lactose digestion isn’t destroyed in pasteu rization, many people who are lactose intolerant can enjoy JD milk. However, low-temperature pasteurization allows the milk will spoil sooner than ultra-pasteurized brands. The Schrocks want customers to enjoy their milk fresh, not preserved.

Since the milk is non-homogenized, you can pop the plastic cap off a cold, glass bottle and spoon natural cream off the top. Schrock says that non-homogenized milk’s fat globules are too large to be absorbed into the blood stream, unlike the fat in homogenized milk that can clog arteries. “The fat goes right through the [digestive] system,” says Schrock.

JD Country Milk will soon bring cows back to its farm to increase production while keeping the quality of the product very high. “The quality of the raw milk is what the end product will be,” says Schrock.

The Schrock family is growing its dairy business slowly to remain in control, despite a booming market. “We just got into Paducah in the last couple of months. We’re growing city by city.” JD Country Milk is currently under contract with an undisclosed company in Lexington to develop a healthy ice cream without added chemicals. Once the contract expires next year, JD Country Milk will begin to market small amounts the ice cream. Schrock says, “Our goal is to get some ice cream out there that agrees with you.” •

Rachel Hurd Anger is a writer raising chickens in Louisville. She’s a regular contributor to Urban Farm and Chickens magazines.