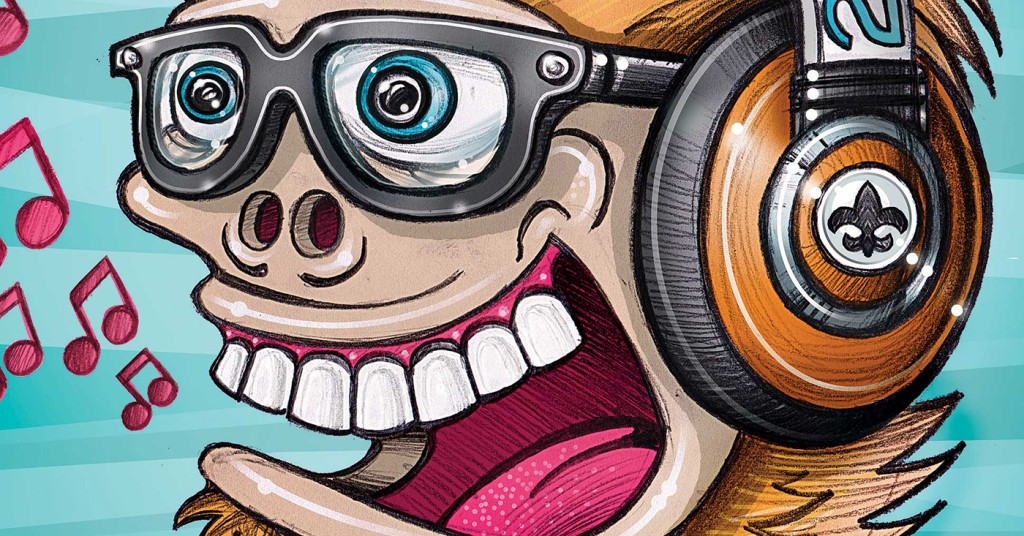 My Morning Jacket
“Big Decisions”
Radiating a massive amount of charisma with the sort of big, catchy riffs, punchy leads and barely-contained vocals that are tried and true landmarks of the rock ‘n’ roll terrain, “Big Decisions” comes out of the gate cool and collected and builds into a sharp, unhinged chorus. The entire new My Morning Jacket album is ambitious and freewheeling, but even with the serious, scathing subject matter, this track plays like a summer anthem, as it’s armed with enormous hooks and slick lead playing. My Morning Jacket doesn’t overcomplicate the structure of “Big Decisions,” but they let go at all the right times. —Scott Recker

Blind Tigers
“Smooth Talker”
Unpretentious and directly to the point, the garage-rock aesthetics of “Smooth Talker” are enticing because of its no-frills nature, but also because of the subtly slipped in layers — the indie-style handclaps, the psychedelic-inspired leads that hide behind the dominant rhythm guitar and blistering drums. It’s just enough to keep it from getting boring, without losing the edge that seems to be the goal. The chilly, confident vocals float alongside of everything in a way that is a bit reminiscent of old-school punk, but matched with newer waves of bare-bones, stripped-down influences. —Scott Recker

Houndmouth
“For No One”
“Little Neon Limelight,” the latest album from the Southern Indiana collective Houndmouth, was brushed liberally in the earthy hues of the Americana landscape to become one of the year’s most exciting albums — and it’s hard not to love the fact that the cover was shot in front of a local strip club, as well.  On the song “For No One,” they stripped all of the Americana tropes away and left a stark acoustic ballad from frontman Matt Myers. The lyrics are bleak, vivid images that feel like they sprang from the mind of Bob Dylan and Hunter S. Thompson simultaneously and landed on a piece of paper in front of the singer.  By the time he reaches the closing lines — “I’d do it all for you/but I do it for no one” — Myers’ voice feels like an old weathered boxer explaining to his hands why he still has to fight. —Brent Owen

The Misty Mountain String Band
“Steam Powered Aereo Plane”
There’s a subtle wit in the lyrics of this song, originally written by John Hartford in 1971, contrasting rural simplicity against industrial sprawl and ending with a sly condemnation of the mid-century technological revolution that commercial air travel seemed to represent. On The Misty Mountain String Band’s new album, “Brownsboro,” they cover Hartford’s classic tune, with the same witty bite, as the band contrasts their classic bluegrass sound with a twist of modern influence. The song feels extended, with several instrumental breakdowns that allow the individual members to shine.  And with every note played and every syllable uttered, the band seems to be relishing in the absurdity that a bluegrass song about modern technology even exists at all. —Brent Owen

Airplane Jumper
“Enormous”
In my mind, there has been a long-standing Louisville sound, especially in the indie scene, that privileges minor keys and hard math-rock oriented grooves, which, in the last several years, slowly ebbed in the wake of bands like White Reaper or Houndmouth. While “Enormous” certainly has the melancholy part-and-parcel of so many Louisville bands, there is an otherworldly quality here that sets it apart from anything else. This is such a multi-layered track, but somehow it’s still a simply laid-out track, with a dreamy, ephemeral quality that makes it an easy listen. “Enormous” is remarkably resilient to repeat listens, which says something for a song with a lot of repetitious parts and simple changes.
—Syd Bishop

All Wool and Yard Wide
“Broke All The Rules”
There is something so charming about All Wool and Yard Wide, the newest project of Daniel Duncan, alum of The Commonwealth and former Greenhaus owner. Perhaps it’s the gentleness of the music, an almost tentative entry that underscores the earnestness of Duncan’s voice, or the slow build towards the thundering climax. Whatever the case, there is something remarkably catchy about “Broke All The Rules” — the second track off of their debut self-titled EP — that made it impossible not to add to this list. What All Wool and Yard Wide does so well is make the sort of music that uses restraint as its currency, an exercise in minimalism that emphasizes texture and vocal narrative over and above any sort of virtuosic playing, although, to be clear, the level of talent here is immense. Still you won’t find needless solos or notes out of place, as the band carefully guides you on their journey. —Syd Bishop

White Reaper
“Make Me Wanna Die”
White Reaper has made a name for themselves with straightforward and raucous punk-infused psychedelia that’s part oddball, fuzzy rock and another part gritty, dive bar-friendly pop music. And with “Make Me Wanna Die,” an early single off their forthcoming record, White Reaper seemingly doubles down, with a sound that seems thicker and wilder. At 2:33, the song is short, per usual, as the band gets in and out quickly, injecting shots of adrenaline with heavy-handed guitars, trippy interludes and a thunderous rhythm section along the way.
—Scott Recker

Twin Limb
“Long Shadow”
Recalling the hazy sounds of Beach House, Twin Limb’s “Long Shadow” takes me back to those carefree, passion-filled youthful evenings when the sun was pushing against us, its inevitable setting causing a feeling of loneliness to take hold with our own shadows growing at our backs. We all knew that the day would have to end either now or in the upcoming years when life would push us away from each other. That type of nostalgia in a song is powerful and rarely found, but Twin Limb captures it so well. I can’t wait to hear what the promised full-length sounds like (helmed by super producer and band member Kevin Ratterman), but in the meantime, I’ll keep my toes dug firmly into the sand and hope to hang onto those sepia-toned memories for a little bit longer. —Kyle Meredith

Bookshelf
“Heavy Weight”
While I know absolutely nothing about the band Bookshelf (try to google them and, unsurprisingly, you get links to bookshelves), I stop everything I’m doing anytime their song “Heavy Weight” comes on the radio. Its build creeps along like a desert snake, a little dark and a little seductive, hiding behind rocks and unsure of its own intentions. There are some background vocals that sound like they were recorded in the bathroom down the hall, which only lends to its mystery. All in all, I’m in love with it because it sounds exactly like the Louisville music scene past and present. You can hear the seeds that Slint planted just as much as the tree that’s grown out of My Morning Jacket’s more experimental side. I’ll be keeping an ear out for their next move. —Kyle Meredith

The Astral Planes
“Silence”
The Astral Planes quietly entered the scene in January with the release of their first album, “Ocean of Light,” a well-rounded take of post-rock and related underground categories. The album overflows with ideas, which is acceptable from a band of old friends experimenting with guitars, synth and imagination. The Astral Planes chose many pathways (see: the psych-rock grooves in “Stay Alive” or the ever-so-melancholy fuzz-ballad “Amina”) but the best is on the way out. ”Silence” caps the 10-track debut with an airy acoustic tune. The accompanying words look inward, to “clear off all your pathways” and reach the centering conclusion. —Lara Kinne

Karass
“Hickorynut”
Instrumental-rock band Karass is a holistic bunch and it shows in their seamless compositions. Each one begins in an established space and bleeds into another, as they pour on the loops it needs to stretch out and grow. “Hickorynut” is the smallest and sweetest piece of their latest offering, “The Donut Industrial Complex,” that came about in early May. It’s their best yet, a stately, fluid ride forging further connections in the Karass sound. “Hickorynut” is especially playful, with the delicate ripple of chords and keys. It’s a tease that justifies a full listen of Karass’s new LP. See also: the bass love on “I Just Like to Climb Trees.” —Lara Kinne

Murder By Death
“Strange Eyes”
Murder By Death’s new fascination with ominous-sounding ’70s keyboards blends nicely into “Strange Eyes,” a song that bounces from mellow minimalism to an explosion of sound. It’s an upward trek, spending the entire duration of its life slowly ascending, eventually reaching the top and then bluntly fading away. The chanted chorus and quick verses are familiar, but everything that happens in the space between is anything but. They took something subtle, basic and catchy and turned in enormous, intricate results. It really shows how the recent Louisville transplants and veteran musicians are working hard — and carefully — to not repeat themselves.
—Scott Recker