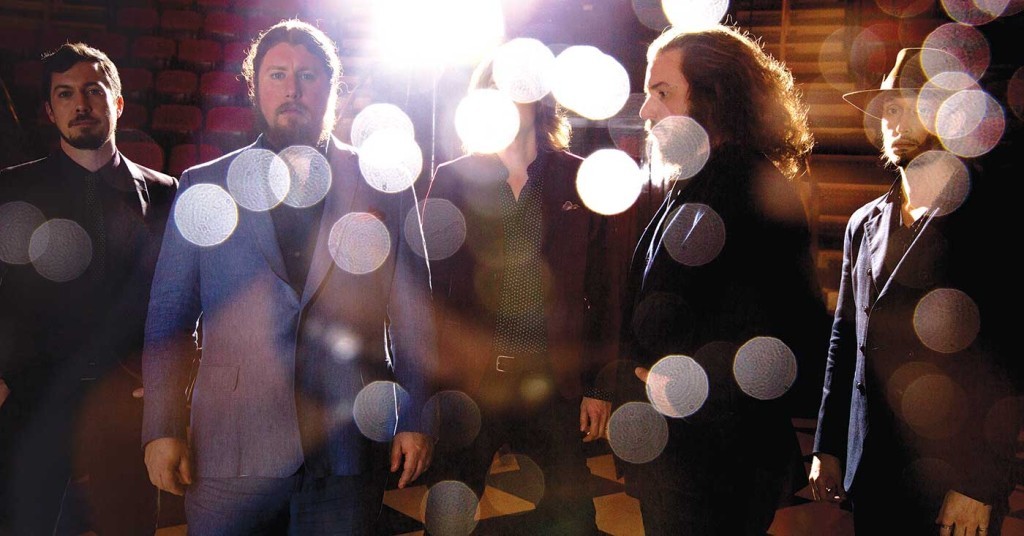 For a band over the 15-year mark, My Morning Jacket’s newest album, “The Waterfall,” is an incredibly ambitious and restless entry into their discography. And while some of that has to do with the big, rock gods-apeasing guitars, the swan dives into ’80s synth-pop and the unapologetic flirting with prog-rock, at least an equal share belongs to the reverb-fueled vocals from Jim James, which bend and break, taking on multiple personalities, ranging from chilly and sad to spacey and sugary.

There’s a fine line between cheesy and innovative, and My Morning Jacket continues to walk that line well — content as the oddball, essentially uncategorizable, band that journalists continue to ask whether or not they wish they had a radio hit, when, in reality, they’re actually bigger than what makes sense in the rock/pop landscape from their debut in 1999 to present. Don’t get me wrong, they deserve to be where they are. But that rise didn’t happen because they fell or forced their way into the right vacuum, it happened for the same reason that the current product is solid: the unfiltered, freak flag cocktail of more genres than I can probably name off the top of my head mixed with a forward-moving, DIY spirit has served them well. To find the path to Cumulus would mean leaving all that behind, which makes little sense.

LEO recently caught up with James to talk about the new album, how going into the studio is different now compared to in the band’s beginning, who he is looking forward to watching at Forecastle and how his side projects help bring new life to My Morning Jacket.

LEO: To me, “The Waterfall” is a good example of how My Morning Jacket can move in a lot of different directions, but can still maintain a distinct sound. Is that sort of evolution something that you guys think a lot about or does it happen naturally?
Jim James: It just happens naturally — at least for me. I hear some of these new different things, try some different things. We always try to switch up the place that we go to. I feel like there are so many elements, just in life, that make everything different already. It’s not like we’re necessarily trying to make it different, but I think we actually want it to be different, though. I guess maybe a little of both.

LEO: Do you ever listen to past records before you record? Or is that something that you stay away from?
JJ: I find it hard, once we’re done with a record, to listen to it ever again — unless I have to reference it for some reason. I keep them all with me, so if we’re on the road and we want to play a song that we haven’t played in a while, I listen to it and try to remember the chords or whatever.

LEO: What are some of the differences that you notice between when My Morning Jacket goes into the studio now compared to when you went in the late ’90s? How has the recording process changed for the band?
JJ: That’s a great question. We were just thinking about that because we just remixed our third record, “It Still Moves,” for the ATO 16th anniversary. It was just funny how different it all was. [And I’m not saying] it was better or worse; it was just so different. To think of how we’ve all changed in our lives, we’re different people now than we were ten years ago. So, when you hear yourself ten years ago, it brings back memories of what made you that way, up until that point. I think, as you grow older, you grow more cautious, you learn more things. When you’re first starting out, you don’t know as much, so you’re kind of blindly navigating through the tunnel of what’s going to be good or bad.

LEO: Kind of along the same lines, what were the differences from the sessions of the last album, 2011’s “Circuital,” to “The Waterfall?”
JJ: It was really different because we did the last record here in Louisville, in this gymnasium, in a church. We brought in all our own gear. One session was super hot, the next session was super cold. We had a lot of fun, but it was difficult. For this last one, “The Waterfall,” we were at Stinson Beach. It was kind of a studio, but we still brought in a ton of our own gear. Stinson Beach is right on the ocean. I feel like I’m really affected by water and the ocean. Just being able to see the ocean from the window of the room we were playing in was such an experience. They couldn’t have been more different.

LEO: From the sessions from “The Waterfall,” you guys have another record in the bag, right?
JJ: Yeah, about 70 percent of one.

LEO: Is this next record related to “The Waterfall” conceptually in any way or will it completely stand on its own?
JJ: It’s completely different. I have a ton of demos and we kind of went into [“The Waterfall” sessions] with no goal, no timeframe, no conceptual idea. We just wanted to go somewhere and start playing songs and let the chips fall where they may.

LEO: When you guys toured with Bob Dylan in 2013, what sort of impact did that have on you when you recorded “The New Basement Tapes?” [“Lost on the River: The New Basement Tapes” was an album of recently uncovered, unreleased and handwritten Dylan lyrics from around the time he and The Band recorded “The Basement Tapes.” It was produced by T Bone Burnett and featured James, Elvis Costello, Taylor Goldsmith, Rhiannon Giddens and Marcus Mumford.]
JJ: It was crazy getting to sing with Bob on that tour, the Americanarama Tour. Jeff [Tweedy, from Wilco] and I got to sing with Bob five or six times. I never thought that would happen, especially on that tour — the first two or three weeks had gone by and we had never seen Bob or heard from Bob. Then one night we got the invitation to sing with him. That was such an honor, to share the stage with him. And, then, to get the offer to do “The New Basement Tapes,” it was really special. Again, I never had one conversation with him off the stage. But getting to share the stage with him, and, of course, his music means so music to me … and getting to work with those lost lyrics — it was pretty unbelievable.

LEO: Do your side projects allow you to recharge the batteries on My Morning Jacket? Do short breaks bring new perspective to the band?
JJ: Absolutely. We all believe that music should be free. You should be free to do what you want and to explore. And I think that definitely brings a lot of new ideas. It really opens me up because I don’t feel restricted at all. And that makes me love something more.

LEO: You’ve toured heavily through the years and have sustained some injuries and have had some health issues because of it. Is there anything that you do differently now when you’re on the road?
JJ: Yeah, we try to make our schedule a little smarter and I try to take care of myself a little better. I do Pilates, been trying to learn how to stretch and get more physically ready for shows, do more exercising and walking.

LEO: My Morning Jacket recently played two secret shows at Headliners, which is the first time in around a decade that the band has been on that stage. What was that like?
JJ: I go there all the time. So, it wasn’t like I hadn’t been there in a long time and I’ve guested with a few people here and there over the years, but it was pretty unbelievable. That was one of the first real clubs that we ever played. It was a trip down memory lane, but it also felt appropriate somehow.

LEO: What are some of the bands at this year’s Forecastle that you are looking forward to checking out?
JJ: You know what … I have no idea who else is playing. [laughs]. Do you know any of the bands off the top of your head?

LEO: Umm … the headliners, besides you guys, are Widespread Panic, Modest Mouse, Sam Smith, Houdmouth …
JJ: I love Houndmouth. I’m always excited to see them. Let’s see here; I’m looking at it online … I’m looking forward to seeing Sturgill Simpson. He’s from Kentucky. I’ve never seen him before. I’ve heard The Lone Bellow is good. There’s a band from Louisville called White Reaper, who is coming up. A band called Twin Limb that I really love, who I think is one of the best new bands I’ve seen in a long time.

LEO: Is there a unique sort of energy to headlining a festival in your hometown?
JJ: Oh, my god, yeah. Every time we play Louisville it’s always really unique — there are so many memories and so many people we know. It’s a really special thing.