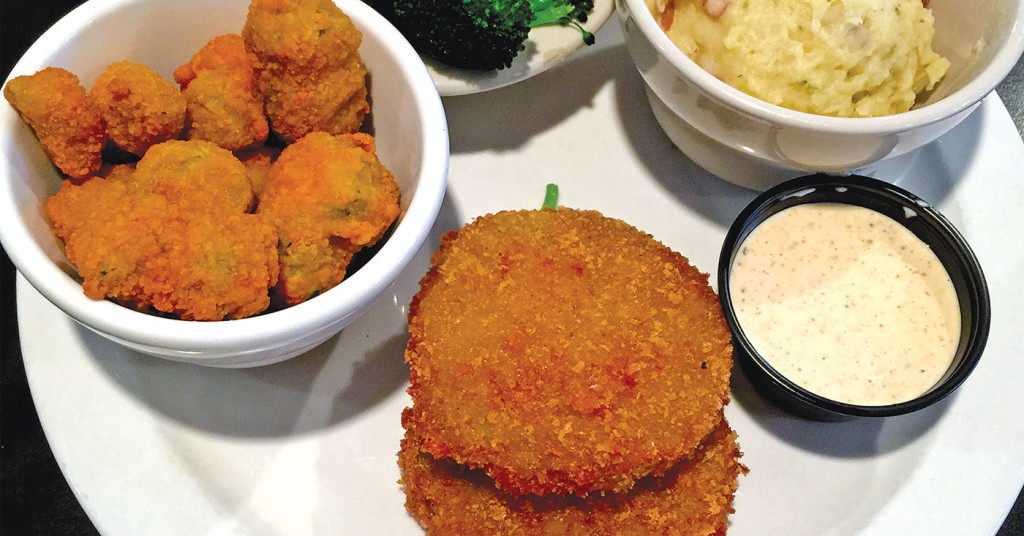 There’s something about Goose Creek Diner that brings out the city boy in me, and not in a good way.

Don’t get me wrong: I really like this place, and I had an excellent meal there with a bunch of friends the other night. But it’s an odd mix — a self-proclaimed “diner” that serves Southern-style fare, and I bring some baggage to this concept that has to be unpacked before I can settle down and, well, dine.

First of all, a diner is a Northeastern thing, not a Southern thing. Its natural habitat is New York, New Jersey, maybe Connecticut or Pennsylvania. A diner in Louisville — much less points south — reminds me of the penguins at the Louisville Zoo: Fun to behold, at least for a little while, good for a few laughs, but it just ain’t natural.

And then there’s that whole Southern thing. I know it has become chic for hip Louisville eateries to pretend to be Southern, and for chefs who arrive from faraway places to discover an inner Southern boy who they never knew resided there.

I grew up in Louisville, and I always thought the South started somewhere well away from here. Bullitt County, maybe. Or Southern Indiana. Heck, I didn’t even know what grits were until I grew up and hit the road. Fried green tomatoes? What in the heck is that? All I knew about green tomatoes was that they aren’t ripe. Those things will give you a tummy-ache if you don’t watch out.

But I’ve learned better. So, when a bunch of friends suggested we gather at the Diner for dinner and go crazy on a pile of fried greens, I was all in.

“They’re the best in town,” my friend Lanier swore, and doggone it, she was right. Slice a pale-green orb into firm cutlets and it reveals itself as tangy, faintly fruity, not at all under-ripe. Cloak it, as Goose Creek does, in a thick but tender breading; fry it to a beautiful, grease-free dark golden-brown, and serve up a few with spicy-creamy “Creek sauce” on the side, and you’ve got an appetizer ($4.99) or a side ($2.50) worth savoring. Or if you wanted to order three servings and call it a meal, I’m pretty sure they’d play along.

Of course, there’s a lot more than fried green tomatoes here. It seems to me that an awful lot of it is fried stuff, but this may be that Southern-aversion thing at work. It’s certainly affordable: Entrees top out at $13.99 (for a half-rack of baby backs napped in a gently spicy sauce, which our pal Marguerite consumed surprisingly fast).  OK, actually the top ticket is $18.99 for a full rack, but barring extreme eating, that’s dinner for two.

I looked over all the fried stuff and the heavily carnivorous menu and suddenly realized that I could combine the joy of fry with a ration of health by going for a veggie plate involving some fried things and some nutritious things. I picked four for $7.99 and noshed happily on a pair of sizable fried green tomatoes and an ample bowl of crisp fried okra, then turned virtuously to fresh, carefully steamed broccoli, tender but still bright green, and comforting mashed red potatoes.

As a proper diner should, Goose Creek keeps an array of pies and cakes spinning in a rotating display case. We passed around a hefty slab of rich and delicious coconut cream pie plated on seductive caramel and called it good.

With a couple of glasses of Goose Creek IPA (dangerously cheap on a $2-per-pint Wednesday special), my filling dinner came to a laughable $12.74.

Now, here’s a pro tip: Our friendly and efficient server, Asia, who wisecracks like a grizzled old waiter in a Brooklyn diner but flashes a winning smile that lets you know it’s all in fun, ran a Derby mini-marathon to keep a bunch of tables well served. You calculate your 20 percent, see that it comes to $2.55. You chuckle. You pocket your calculator. And you give her at least five bucks. •

Save the date!
86 Addiction with
The Healing Place

This is strictly unofficial, but I can’t wait to urge you to save the date, Wednesday, July 22, and plan to dine out in Louisville early and often on that day.

Local chefs and restaurants will soon be invited to join this effort by offering to pass along 10 percent of sales on that date to benefit  The Healing Place, an award-winning local nonprofit that provides social support and medical assistance to men and women suffering from addiction at its campuses on West 10th and South 15th streets in the near West End.

The day, “calladditionAddiction,” uses restaurant slang to claim its hope to “86” addiction to drugs and alcohol — an affliction that’s all too common in the industry — taking it off the menu now and forever.

If you’re a chef or restaurant manager and would like to get in on this project early, shoot me email at the address below or on Facebook, and I’ll make sure you’re on the list. •