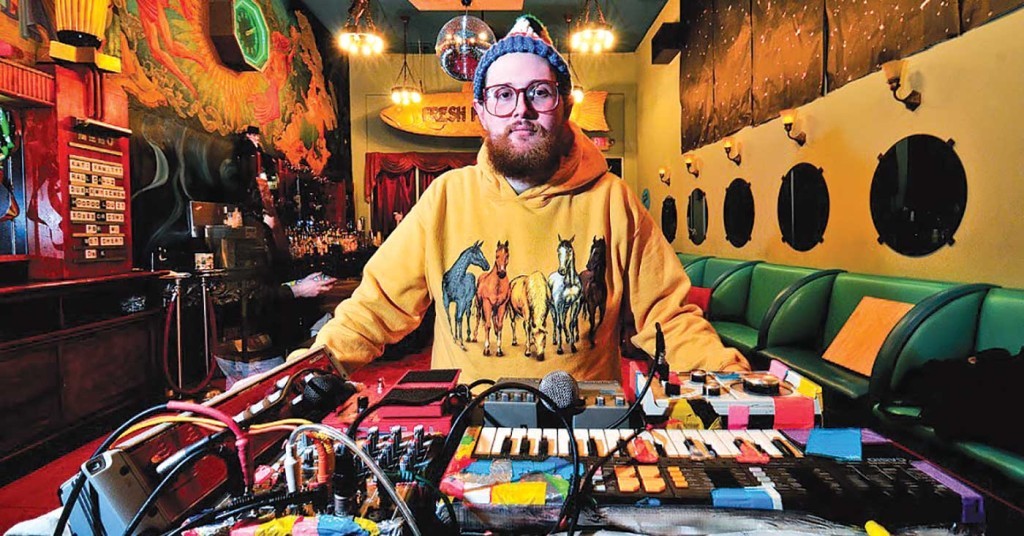 Electro-acoustic composer and singer-songwriter Dan Deacon has been a staple of the indie music scene for years now. Before he returns to Louisville on Sunday in support of his new album, “Gliss Riffer,” LEO caught up with him to talk about his arts collective, the first computer he made music on and what’s next.

LEO: The last time you were in Louisville, it was at the KFC Yum! Center, opening for Arcade Fire. How do you feel about coming back and playing a smaller venue?
Dan Deacon: Most of the audience at my headline shows know who I am and they are there to see me. Opening for a much larger band like Arcade Fire, I am like the cartoon that plays before the movie. My job is to not only be tolerated, but to perform well enough to be remembered and enjoyed by people who have no idea who I am.

LEO: Tell me about Wham City, your arts collective.
DD: I think it started 11 years ago and a group of us were out of college moved to Baltimore. It’s a real loose-knit collective. We don’t have collective meetings. For the most part, we all work on our individual storylines.

LEO: Being an artist and member of a collective, how do you feel about the state of arts funding in the U.S.?
DD: I don’t think the arts should be funded. Art should be about dismantling the government and not making what the government wants to see. I wish the money could go for better social systems, so people could have more time to make art and have self-expression. With funding, much of the art becomes trying to find funding — trying to find patrons. It really distorts the process and serves capitalism instead of the creation of art.

Rather than paying an out-of-town artist to come erect a sculpture or paint a mural, I’d rather invest in school programs that teach kids. We shouldn’t be cutting art, music or computer programs from school and then be like, “We need more art.”  Teach people to make art. Teach people the value of self-expression. Give them the ability to do it.

LEO: How did you come to the digital medium?
DD: My family bought a used computer from a friend of theirs and it had a program in it called Midisoft. It was kind of like MS-Paint, but for music. It was like figuring out a puzzle.

LEO: Many of your compositions are minimal. How do you maintain that with so many digital instruments at your disposal?
DD: You quickly realize that every instrument has strengths and weakness. I just want to access to as many textures as possible.

LEO: What are your next projects?
DD: There’s a couple more videos in the pipeline. I’ll be on tour pretty much until July, then I have the month off — then heading out on the road again until probably October. Most of my brain is focused on performance practice. Once that stage is done I think I’ll start diving back into seeing what else exists in the world.