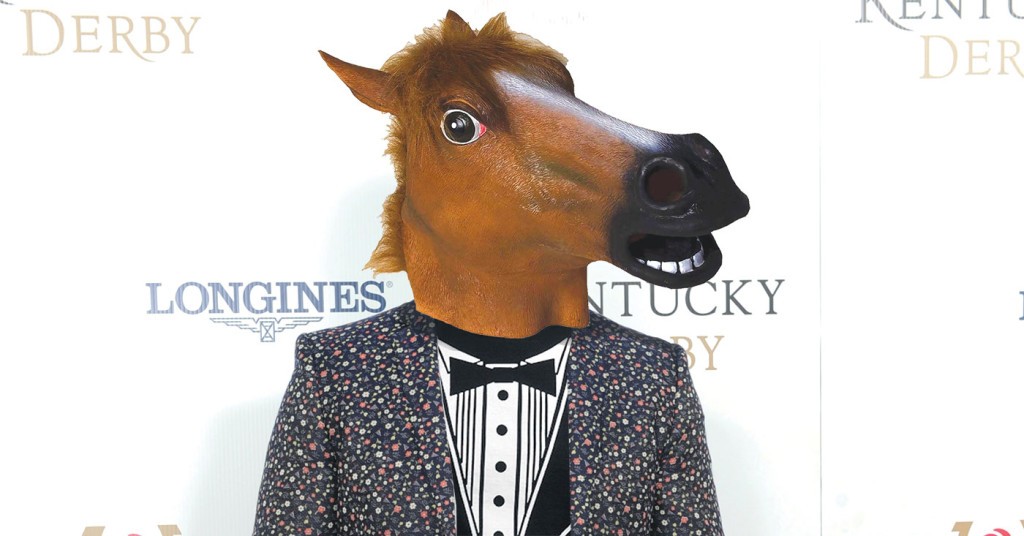 For the last 25 years, I have been a regular in the Churchill Downs infield for the Kentucky Derby, enjoying the festivities with 80,000 other infield drunks. However, since becoming the satirist for the Louisville Eccentric Observer last fall, my elevated profile has rendered my Derby-as-usual plans … obsolete.

What I discovered this Derby is that what I considered to be a misunderstanding of only a select few readers who did not immediately understand my purpose at LEO turned out to be a much greater misperception of who I am as a pubic figure.

I hope that by telling my story people will come to realize that LEON is the local satire page that runs bi-weekly in LEO Weekly. And whatever you have thought about me in the past, please reconsider any stories I tell, news I cover and headlines I write as my life’s calling: to make you laugh.

What happened Saturday, and described below, is LEON at the Derby.

What started off as my normal Derby morning — Bloody Mary and bacon, Tarc to Tarc to track — quickly turned into the life of the rich and famous. Perhaps I was partly to blame, wearing my freshly-pressed tuxedo t-shirt, giving the impression of my readiness for a more formal party. Only a few steps into the gate, I was distracted by a group of people yelling in my direction, “Brian! Brian!”

I pointed to my chest and mouthed the words, “Me?” back at them.

They all said “Yes! Yes!” and continued to wave me over, so I obliged.

Before I knew it I was being ushered across the red carpet, between all of the celebrities I had always seen on TV. Suddenly, emerging from between the cameras flashing emerged two microphones, held by none other than NBC’s fashion experts Johnny Weir and Tara Lipinski. They were both talking so fast I could hardly understand either one of them. All I know is Tara made some comment about getting past the made-up war story, and Johnny asked where I got my “faaaaabulous shirt.” I told them Target. They both laughed before pushing me along and saying, “That’s NBC’s Brian Williams folks. Looks like he’s recovered from his hiatus.”

With no idea what had just happened, I began to proceed to the infield before being approached by a man introducing himself as a producer with ESPN. He told me the that they would like to have a word upstairs in Millionaire’s Row. Confused but curious, having never been to Millionaire’s Row, I agreed. We went up an elevator and walked out onto the sixth floor of the Clubhouse. You could see the entire track, as well as the entire infield, where I was supposed to be.

Lo and behold, an ESPN crew was there with a camera. As I approached, the reporter extended his hand and said, “Thank you for doing this, Senator. All we want you to do is give us the weather report so we can use your weather face to handicap the big race … So just smile and tell us it will be sunny.”

Hopeful I would be allowed to stay and mingle with the celebs, I looked past the obvious mixup and did as told. When asked on national television, I smiled big and said, “It’s going to be a beautiful today.”

After thanking me, I hurried over to the bar, hoping to catch a free drink before someone noticed I wasn’t supposed to be there. In the drink line I was tapped on the shoulder. I turned to find myself face to face with Speaker of the House, John Boehner. He threw his arms around me in a big hug and said, “Benny! You old dog you … You didn’t tell me you’d be at the Derby. You keep insisting on inviting yourself to things. Here, let me finally invite you to the best drink the Derby has to offer.”

Grabbing me by the arm he took me by several tables, introducing me to several people as “his dear friend Benjamin, and Israel’s best friend.” He also told all of them that they need to support me if they support Israel’s security.

That is when it dawned on me: Every one of these people is confusing me with a celebrity I’ve written about. Nobody realized that I am a walking, talking, breathing, reporting parody. So where was Boehner taking his buddy, Benjamin Netanyahu?

A few minutes later Speaker Boehner and I walked out on the patio of the Churchill Mansion Room, right next to the Twin Spires. There again, were Johnny Weir and Tara Lipinski making the $2,500 Mint Juleps. Boehner said he wanted two … each. The next thing I know, I’m slung over a large individual’s shoulder being carried away from the track. He was enormous. I muttered something to get his attention, and he responded, “Don’t worry Tommy! Gronk got you.”

“Yeah, Bruh.” He responded. “Damn Tom, those juleps must be worth the $2,500. Don’t you worry, we’re on our way to the plane. No way we miss that Mayweather-Pacquiao fight.”

I was confused because I had never joked on Tom Brady before. Nevertheless, somewhere on my way to Las Vegas, sitting between a dozen football players on Robert Kraft’s personal jet, I realized it must be time for me to do a satire on Tom Brady. You never know … this Derby may take me home to Boston and Gisele Bündchen.

One thing is for certain though, if this is what the life of a rich-and-famous parody is like, I’m going to be extra careful on whom I pull a goof.