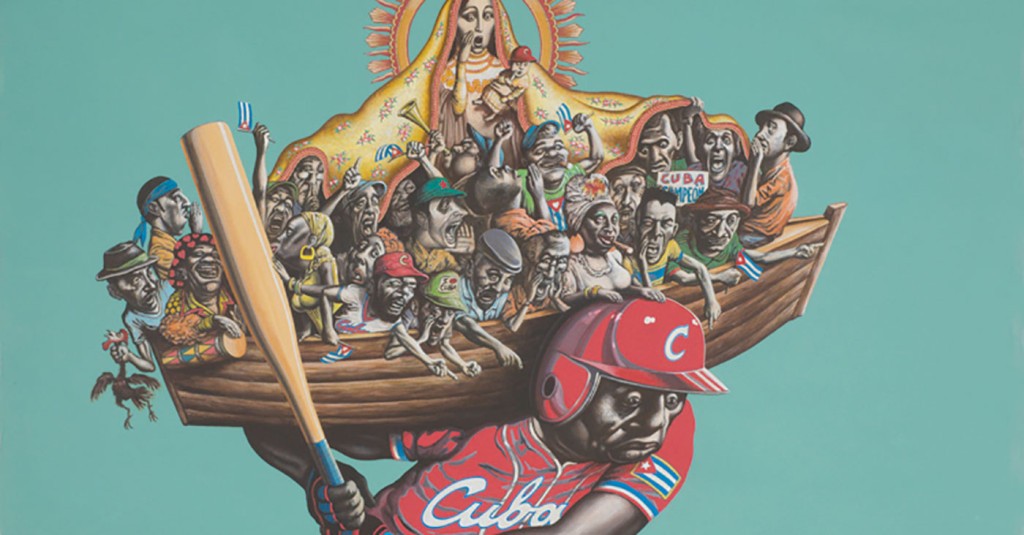 That sound you hear is laughter. People who know me are saying, between guffaws, “Jo Anne has written about sports?” But for some reason I like baseball movies, so why not baseball art? I know, it’s probably a sacrilege, but let this be my disclaimer that the words below reflect the art and history more than sport.

“Stealing Base: Cuba at Bat” is a joint show at museums that display art (21c) and baseball (Slugger Museum). The two small exhibitions of paintings, videos and photographs are extensions of each other, with many artists featured in both locations. At this time when America’s relationship with Cuba is changing, it’s a peek in to how we are alike rather than different.

Baseball may be America’s pastime, but in Cuba it’s much more than that. “In Cuba … baseball is not a sport. It’s a culture,” states Antonio Castro. “Through baseball, we teach our children everything about life.” Castro is the vice president of the International Baseball Federation, as well as the son of former president Fidel Castro and nephew of the current president Raul Castro.

The Castro family figures prominently in Cuban baseball. Many of Perfecto Romero’s untitled photographs show Fidel at a game, usually in uniform and surrounded by players, illustrating there was no separation of state and sport. After seeing these images, I will pay more attention the next time the President of the United States throws the first pitch at a ball game.

Harold Vazquez Ley’s black and white photographs are unusually beautiful. His series “Limites de Salacion (The Limits of Salt)” uses large grains of salt to create figures of players (batter, pitcher, runner), then photographs the results. Since politics is never far removed from Cuban baseball, the realization that you’re looking at a mineral that is depleting on the island, however artfully arranged, is in itself a political statement.

“Esperando que caigan las cosas del cielo or Deporte Nacional (Hoping That Things Fall from the Sky or National Sport),” part of a series by Arles del Rio Flores at 21c, shows over a dozen outstretched gloved arms. This oil-and-charcoal-on-canvas work, a technically wonderful piece, expresses hope in a way that even I, a non-sports person, can understand.

The weight of his world is on the shoulders of “El Cuarto Bate (The Cleanup Hitter)” by Reymerio Tamayo at the Slugger Museum. Be sure you look at the face of the Virgin Mary; it seems she feels he needs a little divine assistance.

My favorite work in both locations is the humorous caricature “Lunaticos (Mooning)” by Douglas Perez Castro (no relation to Fidel, et al, as far as I can tell). The player on the mount has the name “Hell” blazoned on his uniform; horns on his cap and a devil’s tail round out his menacing look. The team in the dugout is depicted as butt-faced, cigar-smoking rubes. The stands hold the overflowing, hyper-excited fans. Lunatics, indeed.

While I don’t pretend to grasp all its meaning, that’s okay. Understanding a work of art heightens its power, but you don’t have to get it all to enjoy it.

“Without question, baseball is a great generator of meanings,” curator Orlando Hernandez says. “The game can and should be used as a grand metaphor to express or to understand not only art, but the very reality in which we live.”