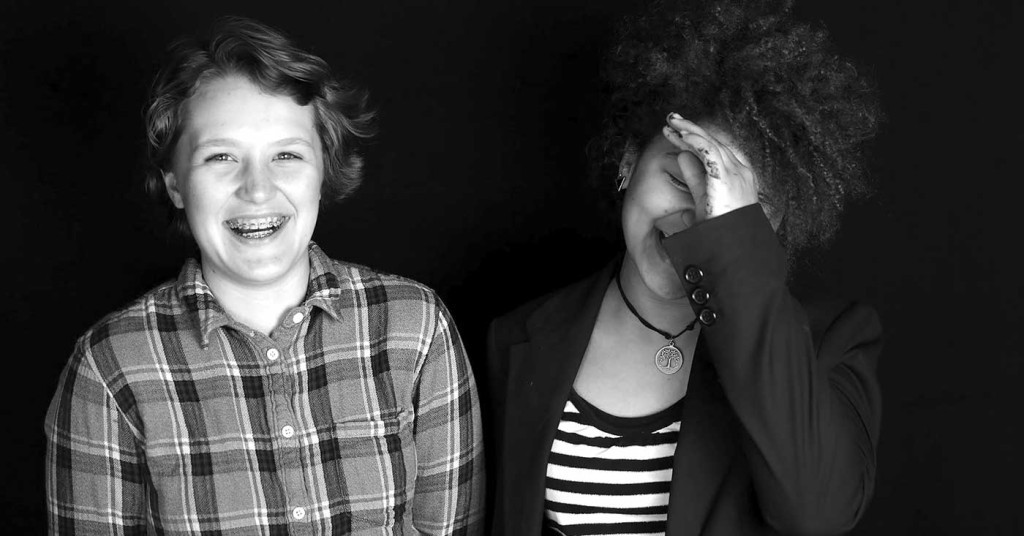 Rock music, punk rock in particular, has often served as a platform for socio-political discourse, and the band Sorry Mom is ready to lead that charge. A trio of high-school-age young women who formed as a result of one of the Rock Shops at last year’s Louisville Outskirts Festival, Sorry Mom, drew their inspiration from, among other influences, Riot Grrrl punk, a feminist punk movement that has roots in early-’90s, Northwestern American indie and punk bands. This June, two members of the band, Olivia Millar and Marissa Booker, are bringing the Southern Girls Convention (SGC) to town. As they proclaim on the SGC website, the convention is “devoted to empowering women, girls and transfolk in the South and to furthering the struggle for social justice.”

The first convention since 2008, the SGC returns this year from June 26–28 at the Tim Faulkner gallery. Explaining their interest and subsequent engagement of the event, Millar said, “Our teacher, Liz Palmer, was one of the organizers of the SGC when it was last in Louisville in 2000. When Marissa and I first started wanting to do a big event, Palmer told us about the SGC and we were immediately attracted to it.”

The optimism and excitement between Millar and Booker is infectious: “The SGC is going to be kickass,” Millar exclaimed. “The speakers that we are having are going to be incredibly inspiring; the workshops are going to be so interesting; and the booths are going to sell some great products and promote organizations that Marissa and I love.”

Booker is equally focused on the conference, emphasizing the virtue placed on an open-community dialogue. She noted, “The SGC is going to be a feminist Idea Festival mixed with DIY/hands-on workshop activities that focus on topics such as intersectionality and intergenerationality within the movement. There are important conversations that are happening and even more that need to happen. We can’t forget the importance of communication, networking and empowerment, and the convention strives to be a common ground for everyone to meet, discuss and be empowered to bring grassroots change wherever they go.”

As high school seniors, Millar and Booker have had plenty obstacles in securing the event but still remain committed to getting the conference together. Millar pragmatically explained, “Money has been our biggest struggle for sure. Luckily we’ve had a lot of support from the community via our gofundme to make the event happen.”

Continuing, Booker echoed that optimism, “It helps that we’re really passionate and drawn to activities like open mics and concerts that are very pro-feminist and can speak about the SGC at those events. We have had a lot of success contacting people that have already participated in an SGC before, since that’s a network of super passionate feminists that are willing to help bring the SGC back, but to many people it’s an unknown. I can understand that, but I hope my generation will take the jump.”

For both Millar and Booker, making your voice heard and sharing that with others is critical for positive community growth. Millar explained, “Activism to me is standing up for yourself and those in your community. The phrase I’ve semi-adopted is ‘If you don’t stand up for your own rights, who will?’ We have to be driving forces of change, or change won’t happen. If you see a problem, it’s your job to do what you can to fix it, even if that is stepping back. Feminism, to me, is not only the empowerment and advocacy of women’s rights, but the intersectional opposition to discrimination in any form (including sexism, classism, homophobia, racism, transphobia, sizeism, et cetera).”

Booker takes a rather pragmatic approach, breaking down her philosophy: “I’m a female. A minority. I’m not rich. I’m dipping into plenty of oppressed populations, so I became self-aware at a young age. When I speak, people don’t always see me, sometimes they see my skin or curly hair or gender. I noticed this and fought it before I could call myself an activist or a feminist. Being an activist is being aware of privilege and its flipside. It’s advocating for others, letting groups speak for themselves. It’s complex.”

Why the emphasis on the southern region in the convention? For Miller, it’s simple. She explained, “I think that feminism, especially in the South (and Kentucky more specifically) is still considered a naughty word or isn’t really taken seriously. It’s true that feminism’s image is getting better, but it’s nowhere close to where it should be.”

Likewise, Booker continued “Well, there is still this idea of ‘the Southern man’ and ‘the Southern woman’ — boyfriends that think they have to pick up the tab, girlfriends pressured into obscene situations, etc. Louisville is pretty progressive, but Louisville isn’t Kentucky. Louisville isn’t the whole South. Of course, the issues discussed are going to be universal and inclusive, the speakers as well, but there is a specific culture present here that can’t be tackled anywhere but here.”

Inspired by national acts like Sleater Kinney, who the band had a chance to meet recently, or Bikini Kill, there are plenty of local acts that have equally motivated Sorry Mom both as a band, and for Millar and Booker, as organizers and hosts of the SGC. Millar admitted, “Some of Marissa’s and my biggest role models in Kentucky are Carrie Neumeyer and Stephanie Gary, the organizers of the Louisville Outskirts Festival in 2014 and many of the bands that performed at the festival (21st Century Fox, Twin Limb, Trophy Wife, LOZEN, Maiden Radio, et cetera).”

And they want to return that favor, to inspire as much as they have been inspired. For Booker, “The main message I want to send is that girls can rock too, just like girls (women, ladies) can organize a convention and promote positive social change. Just recognizing that there is an inequality and taking steps to correct it is all I can ask.”

Millar agrees, explaining optimistically, “I hope that we are as empowering to young women as some older women I know have been for me. A couple times we’ve had young girls around like 10 ask for their picture with us, and that just reminds me how inspiring we could be. The SGC is kind of the same way, like we want people to obviously get meaningful conversations about intersectional feminism and activism out of it, but also I hope that the SGC will spur the passion that could inspire women to do pursue their dreams.”

You can learn more about the Southern Girls Convention, or how to help either as a volunteer or with funding at by visiting their website thelouisvilleyouth.com.