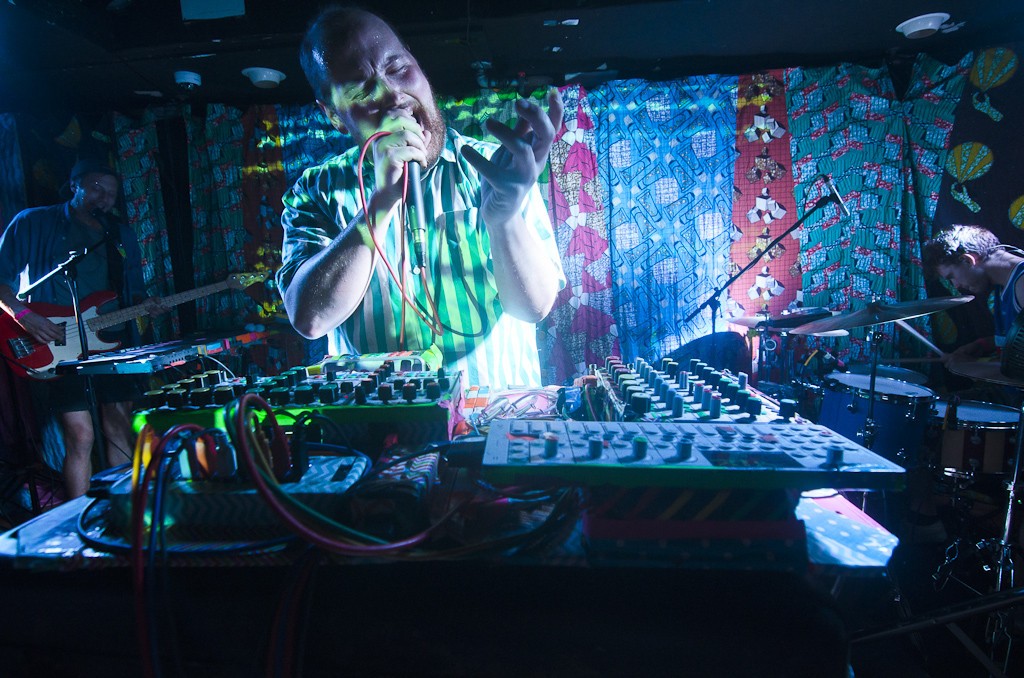 Early into his late Sunday evening set, Dan Deacon remarked on his peculiar touring history with Louisville. An excellently curated but unsuccessfully executed street party in 2012 (the Monday of Labor Day weekend is a really tough sell) marked his first trip. His second didn’t even come to fruition after Avey Tare, of tour mates Animal Collective, came down with strep throat before Forecastle 2013. Last year saw him performing in front of 20,000 people at the Yum! Center supporting Arcade Fire, wherein he did something I’ve never seen in a large arena before, ending his set by announcing he had stuff for sale — in an arena! Imagine Bruce Springsteen murmuring “we got T-shirts, guys.” That ruled, and to wit, you can’t take the DIY out of a man who circuit bends and helped build the Xanadu of Baltimore art punk, Wham City, from the ground up. So, yeah, Dan undoubtedly has had a strange experience with Louisville so far. But other than briefly blowing the power during the crescendo of “USA” from his 2012 opus “America,” Zanzabar proved a more suitable home for Dan to bang on the synths like he’s Johnny Hammersticks.

But first, let’s talk about Prince Rama. Holy guacamole, what a phenomenal, hypnotic live act. I had not given them a fair shake before because … I don’t know. Something about the face paint and the band’s tribal futurism ignited the node a lot of “media folks” have in their brains, passing judgement that such an artist might be, at best, inauthentic and, at worst, #problematic. I don’t know, music writers are dumb. I’m now a disciple and already kissed the rings. No, Prince Rama is not an ironic Brooklyn exercise in “Wouldn’t this be funny if?,” but rather an intriguing collective replete with its own self-contained philosophy – a sort of updated Source Family with a splash of DayGlo.  They’re fun, loaded with a palpably warm stage presence, perennially modulating namaste like the final shot of Don Draper in the Mad Men finale that happened simultaneously during their 45-minute set. They dig clean eating, exercise, registering their albums as new age with Billboard and unleashing enough unbridled, fairy dust-imbued energy to test the structural integrity of the stage. (I had concern that Nimai Larson’s constant rhythmic jumping would topple the wobbling light trees). They may also posses healing powers. But it wasn’t just hippy-dippy love vibes from the Rama cult, as Taraka Larson excellently shut down the shitbird who shouted “you’re hot” … because if you’re awful, you simply must broadcast it. He said no more, and the show carried on, a Dale Earnhardt Jr. towel draped over her shoulder. Prince Rama’s prismatic take on psych-dance absolutely usurped Gang Gang Dance’s reign on otherworldly, polyrhythmic, singularity-ready pop. See this band early and often.

Dan Deacon’s storied live show always feature two critical components — liberal doses of his future shock pop and conducting experiments in human architecture. Per the latter, if you don’t know about this, YouTube it now. Audience participation is all but mandatory. However, even if you’ve seen a number of Dan Deacon shows, the effect of his audience-as-instrument spectacle shape shifts based on the venue. Seeing a winding tunnel of interlocking arched arms from an aerial balcony position at the old Southgate House or Yum! looks majestic. In a 250-person capacity room, it’s more trenchant, visceral and immediate. You’re as integral to the show as Dan.

The Zanzabar set focused heavily on the bangers of “Gliss Riffer” right out the gate (“Feel the Lightning,” “Mind on Fire”) and moved backward through the evening toward the aforementioned “America,” and rewarding longtime fans with “The Crystal Cat,” the song that made put 2007’s “Spiderman of the Rings” on countless iPod party playlist on campuses across the country and made him a weirdo basement show breakout. But even if the albums aren’t appealing to you, there’s nothing in the Dan Deacon live show that isn’t exhilarating, charming and unequivocally a blast. For almost a decade, Dan Deacon has concocted one of the most original and unmissable live shows, in any venue.