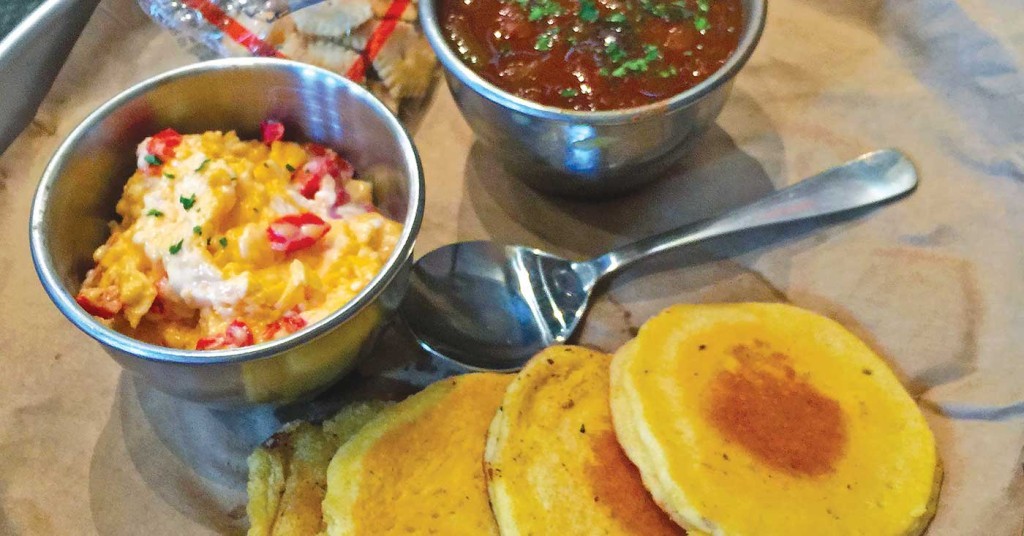 Against the Grain's cornbread hoecakes with homemade pimento cheese, and a cup of black-bean chiliPhoto by Robin Garr

We live in the era of gourmet-style ballpark food. New York Mets fans can dine on sushi or summon a $17 lobster roll while they take in a game at Citi Field. San Francisco Giants fans also have sushi options and a wondrous array of other good things at AT&T Park. (Unlimited anytime minutes are extra.)

Great ballpark fare is not just a thing for effete coastal metropolises, either. Twins fans nosh on lamb-and-goat burgers at Target Field. All things bacon tempt Texas Rangers aficionados, or they may mimic Mr. Creosote with a $26 Boomstick, a two-foot-long hot dog smothered in chili and nacho cheese. Arizona Diamondbacks? They’re crazy for churros wrapped in a donut.

So, Louisville Bats fans might justifiably whine, what about Slugger Field, with its food-and-drink options famously limited by the dictates of corporate beer and food vendors?

The good news is that you can now get pork belly on a stick!  And lots more great barbecue, and fine artisanal beer to wash it down!

The bad news is that you can only get these delicious things at Against the Grain Brewery, and you have to eat it there. Try to sneak some pork-belly sticks or a growler of IPA into the ball park, and the beady-eyed guys at the ticket gates will firmly shut down your fun.

So here’s my advice: If you’re going to the ball game, show up an hour early. Spend some quality time at Against the Grain, enjoy a good meal and a delicious brew, and then enjoy the game with a full tummy and a happy heart.

(And if you get desperate around the sixth inning, here’s a useful tip: The peanut stand near home plate has a few craft beers discreetly concealed at the back. Usually it’s two true local craft brews and two corporate “stealth micros” like Shock Top or Blue Moon. Stick with the locals and you’ll be good to go.)

Lured by a tip that Chef Jordan Delewis had added a bunch of new menu items (including the aforementioned pork belly), we arrived well in advance of a game between the Bats and the Lehigh Valley Iron Pigs the other night.

The new menu items, as advertised, turn Against the Grain — somewhat in contrast with the nonconformist implications of its name — back toward the barbecue mainstream, with “a more traditional approach” to barbecue. To that end, some of the other new dishes include “wet” spare ribs ($14 half, $26 full) with slathered barbecue sauce; house-made smoked sausage ($8.50 for a sandwich, $6.50 for a half-pound link), and a smoked country-ham and cheese sandwich ($10).

Want dessert? Why waste calories on ballpark funnel cakes when you can have a locally made Hi-Five donut with house-cured bacon ($6), or Hi-Five donut holes with Against the Grain beer custard ($5)?

We went in with every intention of chowing down on that pork belly on a stick ($9), but the menu description changed our minds. Sorghum pork belly? With molasses on the side? Nope! If I want dessert, I’ll just get the bacon donut, thanks. Your mileage, of course, may vary.

That house-made sausage ($6.50) made a mighty fine alternative, though, full-flavored and savory, with a haunting coniferous scent that might have been juniper. A side order of long-simmered country style kale ($3) got a thumbs-up from kale-loving Mary. Black bean chili ($3 for a cup) was hearty and spicy, and a good ration of corn hoecakes, fresh off the griddle, with creamy, spicy pimento cheese ($8) may be my new ballpark favorite.

Louisville’s creative Food Literacy Project wants to put Truck Farm Louisville on the road. This  traveling, edible learning garden for schools and communities will be planted in the back of a pickup truck.

“This powerful resource will help the Food Literacy Project bring the message of healthy, down-to-earth eating to thousands of youth and families across our community this year.” said Carol Gundersen, executive director.

To view the details, including an informative short video, then make a quick-and-easy contribution online, visit indiegogo.com/projects/truck-farm-louisville. •