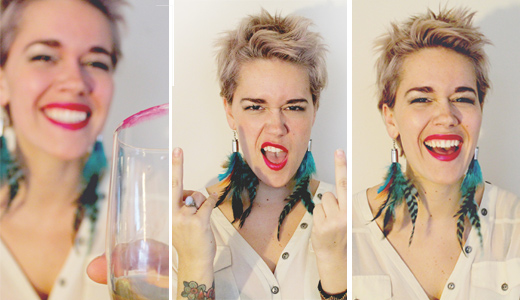 We’re living in a time in the great city of Louisville, unique to many places, where you can have an idea, put it to work, and it just may succeed. Louisville is a fantastic place for passionate and creative minds to flourish, because it seems as though everyone genuinely cares about seeing their neighbors prosper — why not make our town even more spectacular? If you want to open a business where folks ride around on scooters picking up drunk people and driving them home in their own vehicle, you bet your ass it’ll thrive.  If you want to open a bar full of pinball machines, it’ll be shoulder to shoulder every night. If you dream of opening a “beer and breakfast” with keg taps streaming into guest rooms above your restaurant, it will probably become the hippest destination in the Lou. And finally, if you want to add a “Brew on Premises” feature to your grocery-store-style home brewing business, we can only imagine you will crush it, which is exactly what Paul Young, owner of My Old Kentucky Homebrew (361 Baxter Ave.), is doing right now.

Paul opened My Old Kentucky Homebrew in 2009 as a market for home brewers to come get all their equipment and ingredients for homemade concoctions. Much to my delight, he’s opened his doors to us beer lovers who probably wouldn’t be mixing stovetop ales at home, but would like to partake in the experience, and be able to take home our very own fermented recipe three weeks later. “Brew on Premises” is a hands-on three-hour experience, a process that would take five to six hours at home. Paul and his dudes do all the prep and all the clean up and we just get to pick our potions and have all the fun. Ingredients and styles of beer are absolutely unlimited. While we chose to make a citrus IPA, you dream it, they can do it. Ranging from classic Belgian whits to hibiscus wheats to smoked jalapeño porters, half the fun is deciding what your signature beer will be. And if you aren’t sure what kind of beer you like, don’t fret, Paul will help steer you in the right direction based on your palate and preferences.

My Old Kentucky Homebrew is a warehouse-style setup beyond the brewing “store,” equipped with several copper tanks and equipment, along with a retro lounge area that Paul refers to as his grandma’s basement. While there’s plenty of downtime between mashing the wort, draining the sparge and adding the hops, here you’re encouraged to bring your own “refreshments,” order pizza, and play the Sega Genesis. The afghan blankets give it the perfect home brewing feel, yet you’re not at home and you’ve got cool bearded dudes to help guide you through the process.

Brew on Premises is undoubtedly a chance to ask questions and learn all things cervesa, and Paul is a beer bible. A beer nerd but not a beer snob, Paul has passion that exudes right down to his rubber boots. No matter your experience with craft beer making or drinking, “All you have to do is like beer,” Paul says, “no experience necessary.” He even told us about a gnarly special My Old Kentucky Homebrew has going on during Memorial Day weekend that you should undeniably partake in: $150.00 gets you a Brew on Premises session voucher (three hours of brewing and 10 gallons of beer that’s’ ready three weeks later — roughly four cases or 90+ bottles), a “Be a Brewer Box” that includes a fake beard and tattoos, and if they sign up 100 sessions, they’ll donate $1,000 to WaterStep, a local charity that offers products for safe water in developing countries. Talk about Louisvillians supporting and lifting each other up! I’ll certainly drink to that.

By the time you’re reading this, my citrus IPA will be juuuuuust about ready to crack open, and while it’s not instant gratification, it’s got to taste better when you mashed the wort yourself. As craft beer is growing in our fair city, my experience at My Old Kentucky Homebrew seems like as much of an option as an afternoon day drinking, and let’s be honest, Louisvillians love a good beer — why not make one ourselves?  Paul says the creative options are endless at MOKH, “I can’t think of anything else aside from music and art where it’s as old as it is, and people are still coming up with new ideas — beer is forever changing.”