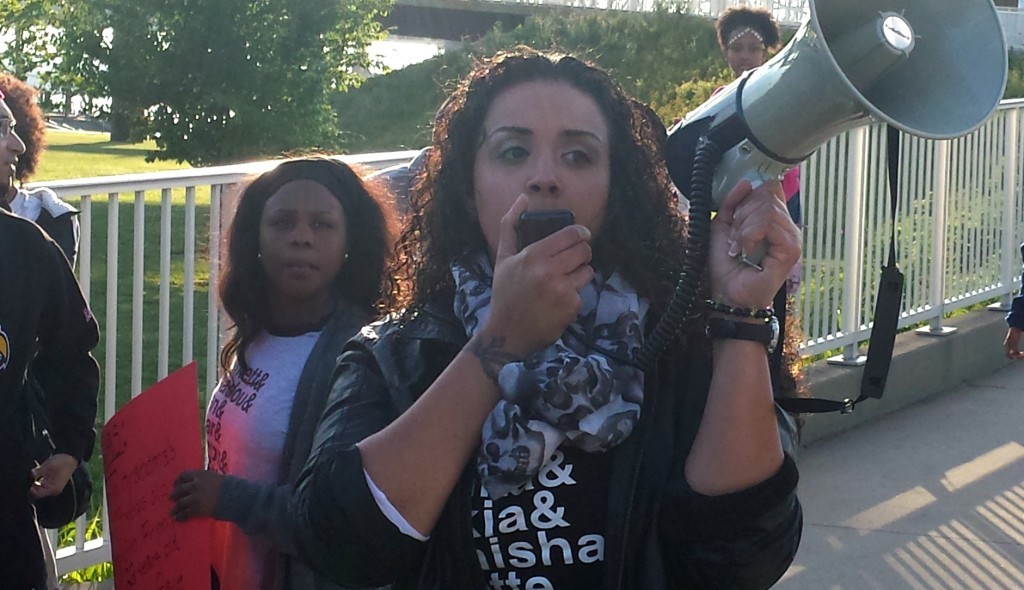 Antwynette Houston was returning home from a trip to Indianapolis in August 2013 when she stopped at a Thornton’s at 3 a.m. to grab a snack for her 9-year-old son. While she waited in the parking lot, Houston was confronted by off-duty Louisville Metro Police Department Officer Scott Sturgeon.

He told her that she was parked crooked because one of her tires was over the line and accused her of being drunk. Houston then offered to take a breathalyzer, but the officer demanded to see her license.

“I told him he was being ridiculous and I wasn’t drunk,” she remembers. “I offered again to take a breathalyzer, and he refused to give me one. He kept telling me I was drunk, and he got irate with me, cursing in my face and spitting as he was talking. He was very close to me. I got really scared. I got into my car and called 911. He snatched me in my car by my arm.”

Eventually up to 12 officers responded to the 911 call. Sturgeon was reprimanded at the scene, but Houston suffered a separated shoulder that forced her to go to the hospital. She has since had two surgeries and dropped out of nursing school because of the incidents.

Houston was one the Big Four Bridge on Thursday, May 21, sharing her story as part of a #BlackLivesMatter rally focused on black women and transgender people who have been brutalized by law enforcement. It was part of a national campaign that saw crowds gather in cities across the country. About 60 people showed up for the Louisville rally, which was sponsored by the Louisville Women’s Alliance (LWA) and the Louisville2Ferguson group. LWA founder Ashley Belcher says so much of the recent talk focused on black men that movement organizers thought they needed to remind the public that black women were suffering too.

“The media has been so focused on the men, but black women have been on the front lines since day one,” Belcher says. “Thousands of people in New York showed up for a rally for Eric Gardiner, but only 20 – 40 people showed up for Rekia Boyd. We want to make sure she and all the other female victims of police violence are also remembered.”

Rekia Boyd was a 22-year-old Chicago woman who was shot in the head after off-duty officer Dante Servin fired five shots at a group of people in a dark alley. Servin, who was acquitted on manslaughter charges, claimed that he feared for his life. Cook County Judge Dennis Porter, who oversaw Servin’s trial, opined in court that the officer should have been charged with first degree murder rather than manslaughter. Servin beat the manslaughter charge because it required proof of reckless behavior but a murder charge does not.

“We kill black women every day in this country and no one does anything about it,” Belcher explains. “We are here because we’ve had enough.”

The Louisville rally was a multi-racial one with several white demonstrators carrying sign that said “Silence = Consent.” David Horvath and Andrew Porter were there representing “Showing Up for Racial Justice,” the three-year old chapter of a national civil rights organization that was founded in 2009. Horvath believes it is important that whites come out to #BlackLivesMatter events to show their solidarity with victims of police brutality.

“We got the call and thought it was extremely important to affirm the obvious — black lives matter — and in this case black women and queer lives matter,” the former University of Louisville librarian says. “This is not parsing, it includes everyone. If you are silent about racism in society you are just propagating the problem.”

Also present was Henry Brousseau, a transgender student who attends Louisville Collegiate School. Brousseau made news earlier this year when he testified before the Senate Standing Committee on Education, which was considering a law that would require transgender students to use the bathroom of their biological sex and not the gender with which they identify. The proposal was later voted down.

Brousseau, who is an intern for the Fairness Campaign, was glad that the #BlackLivesMatter rally included transgender people with black women. “We are all fighting against the same kind of oppression,” Brousseau explains. “White silence really does equal white consent.”

The demonstrators gathered at the bottom of the Big Four Bridge and marched to the top of the span. There were several bikers and walkers who were upset by the demonstration. One biker told demonstrators, “It’s our bridge too.” One of the demonstrators yelled back, “You’re worrying about a bike and we’re fighting for our lives!”