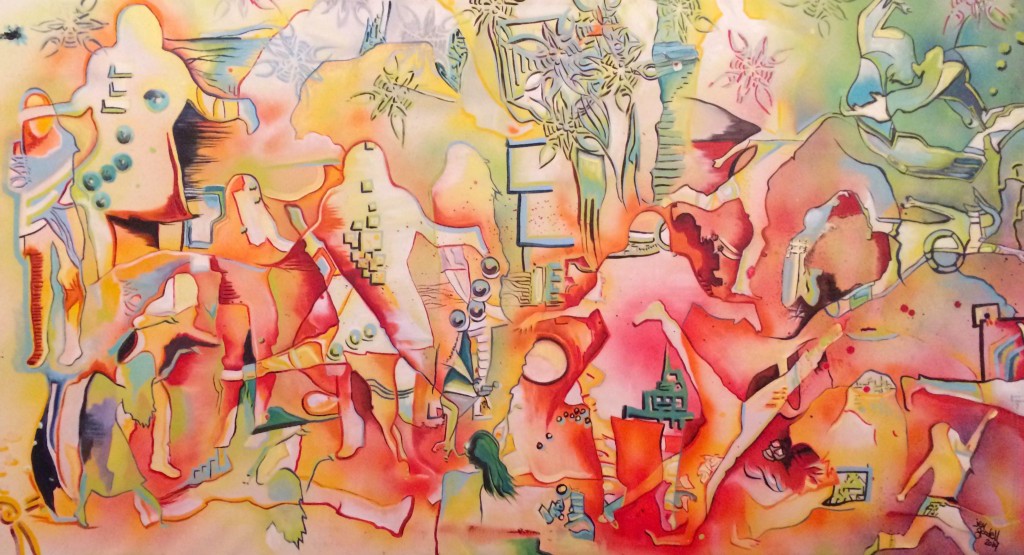 [The above image is “Luminance Pulse” by Jen Goodell.]

Meet Jen Goodell (jengoodell.com), a painter with hopes to have her art on a building near you.

LEO: You got your BFA from Murray State University, where you specialized in surface design, weaving and printmaking. Yet I know you best as a painter, so you must prefer to create in different media, depending on the project. What’s your favorite medium right now and why?

Jen Goodell: My favorite medium currently is painting. Painting was something that always felt rather natural to me, so I chose to explore other [media] in college to gain the experience of something different and to gain a different view on art making. I always planned to pursue painting once I lost the variety of art facilities that college makes available to its students. But now, when I paint, I apply the skills I learned in surface design and printmaking to it. I have used old woodblocks in the backgrounds of my pieces and I find that stencil use on the paintings reminds me of the printmaking days. In the end, painting is the most enjoyable and effective way for me to express the thoughts that I choose to communicate. I still play with silkscreening occasionally and dream of one day having a loom to work with. Weaving is the best way to calm an overactive brain, especially if it is a complicated pattern.

LEO: I’ve heard you say you like to use graffiti in your art but you are not a graffiti artist. What’s the difference?

JG: There are a few reasons why I do not call myself a graffiti artist. I believe that you have to have painted on the streets to truly be a graffiti artist [and] I have not done this. Graffiti art is mainly based on letters, style and getting it out and seen in prominent outside locations. My art is mainly based on figures, patterning and motion. The letters and style are there, but they are more of a background and not the primary focus. I would love to do prominent outside locations, but I have yet to do this.

LEO: Artists find inspiration from unusual sources. What sparks you to create?

JG: I often find the human body quite inspiring, whether it be a person dancing, a child running, an aerial artist flipping … I teach basic gymnastics to toddlers and I am a physical therapist assistant treating the elderly, [so] I work with both sides of the coin when it comes to human movement … I realize that movement is life and that is what moves me to try and paint it. Music is also a major inspiration for me. I watch musicians on stage in sync with each other creating this amazing sound and I want to find a paintbrush to try and express the joy that the music creates in me.

LEO: Did you know Lexington is well known for its street art, according to Paste Magazine? Louisville’s missing out on this.

JG: Yes … Louisville is missing out on this. I believe Cincinnati was on that list as well. I do see new murals popping up in Louisville, but we have yet to have a coordinated event that focuses on bringing art to the streets. It would be a great thing. I believe NuLu is working on something along those lines (with more emphasis on installations and 3-D works), but it would be awesome to have a broader approach and encompass more of the city with art … We have lots of pictures of prominent individuals on our buildings meant to inspire Louisville to be all it can be, but I think art would do the same and add more color to our beautiful city.

LEO: You’re represented by the Tim Faulkner Gallery, have a studio there and work for the gallery as well. I would say you’ve found an artistic home. What clicked with them?

JG: Tim contacted me … over seven years ago … asking me to do a solo show. I had at that point only done coffee shop solo shows in Louisville, so I was definitely interested. I walked into this little room at the back of a hallway on the [second] floor of the Mary Craik building and met Tim Faulkner for the first time. He talked of wanting to create a gallery with a group of artists that were involved and present and truly a part of the gallery. He sounded so passionate and genuine that I agreed to do the show. One year later, he was in a bigger room in the building, two years later he was in a different building and a bigger space, and seven years later he is in a massive building. In that time, I have grown as an artist, have done seven solo shows with the gallery, seen awesome works of art and met amazingly talented artists. That genuine passion for art in all forms has never faded in Tim and those around him. And he has created a building committed to art in all forms for people to create in.