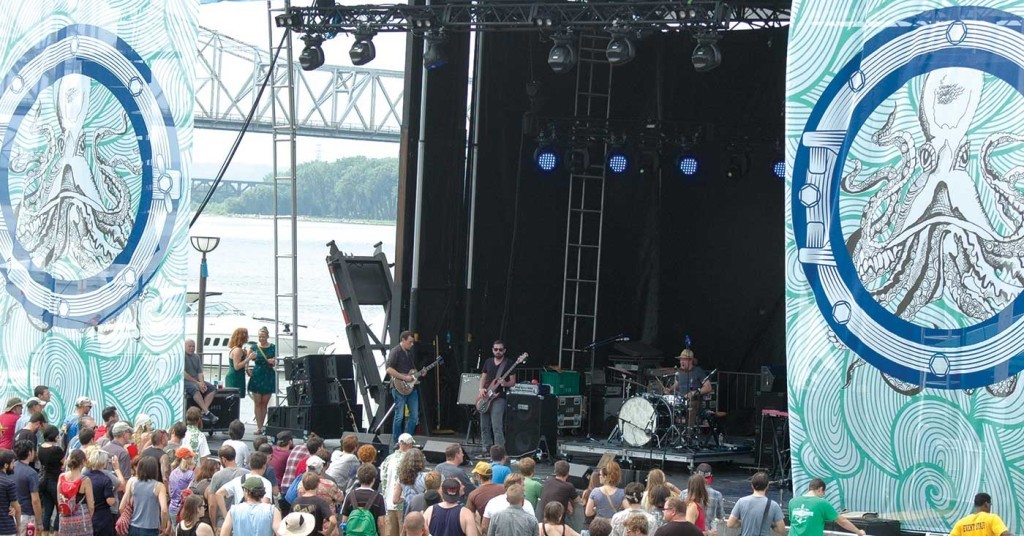 ROMP — June 24 – 27
Yellow Creek Park, Owensboro
rompfest.com
If you prefer a little more bluegrass in your festival, ROMP is the place for you. Located an hour and a half west in scenic Owensboro — home to the International Bluegrass Music Museum — ROMP is a celebration of all things bluegrass. Headliners this year include the Caribou Mountain Collective, Punch Brothers, Sam Bush Band and the legendary John Prine. ROMP is a place for community building, inviting festival attendees to bring their own instruments and jam in impromptu sessions. The festival also hosts a number of workshops on songwriting, clogging, yoga and a number of other activities, including plenty for the kids too. There will be plenty of farm-to-table healthy food vendors, alongside an array of original arts and crafts.

Poorcastle — July 10 – 12
Apocalypse Brewery
poorcastle.com
Billed as “a festival for the rest of us,” Poorcastle exists in the wake of Forecastle, which has evolved over the years as less of a Louisville-centric festival music and more as a major player in the summer festival scene. Hosted again at the Apocalypse Brewery, Poorcastle bands will range from local favorites like headliners Monolith, Howell Dawdy and Twin Limb to up-and-coming acts like Echopathy, Typhoid Beach or Bookshelf. This is the place to catch the freshest Louisville talent and to get some choice local beer. Situated at the edge of Butchertown on Mellwood, the parking can get tight, but this is the perfect place to roll in on a bicycle and the perfect time of year to get out and get into the awesome Kentucky summer.

Forecastle — July 17 – 19
Waterfront Park
forecastlefest.com
Forecastle, which grew from humble beginnings in Tyler Park, is now the crown jewel of Kentucky’s summer festivals. Sam Smith, Widespread Panic and Modest Mouse are set to perform, alongside a host of others. Local luminaries My Morning Jacket and Houndmouth, both of which are performing in support of new records, represent the handful of Louisville acts, alongside Twin Limb, White Reaper and Dr. Dundiff and Friends. Held again downtown at the Belvedere in Waterfront Park, Forecastle includes a diverse lineup of music on its multiple stages, and overlooking the smaller stages would be your huge loss. Making your way from stage to stage, you’ll be entertained and educated by the many innovative art and environmentally-focused installations. From the Gonzo Bar to the Bourbon Lodge, there’s no shortage of pitstops offering hearty, local food, bourbon, brews and even free water at the hydration stations.

Barrels and Boots Music Festival — August 21
Freedom Hall
The fact that this state-fair-hosted event is sponsored by 97.5 WAMZ ought to tell you that some of the biggest names in contemporary country are swinging through Louisville for a one-day-only, all-country music festival. Headliners include Montgomery Gentry and John Michael Montgomery, with a bevy of up-and-coming country music stars opening the day’s festivities. Since the ticket prices include the cost of admission to the Kentucky State Fair, you can show up before the 5 p.m. show time and take in all the sights, ride all the rides and eat as much fair food as you can stomach . Expect plenty of domestic and imported drinks and some great people watching.

Seven Sense Festival — August 22
2100-2300 S. Preston St.
newvintagelouisville.com/sevensense
In a lot of ways, the Seven Sense Festival is more of a block party than a festival, with the music spread between two outdoor stages and one inside both The New Vintage and Zanzabar, and plenty to do in between. While  the lineup hasn’t been announced just yet, there are a staggering 30 plus local, regional and national acts set to play — all for a good cause. The Seven Sense Festival is a benefit for the Boys and Girls Haven of Kentucky, a nonprofit organization dedicated to transforming the lives of abandoned, abused and neglected children. You can expect local craft brews and food vendors, alongside some of the areas finest musical acts. Attendance is free, so remember that extra drink you buy goes to help the kids.

PRFBBQ Louisville — September 4 – 6
The Cure Lounge
What started as a discussion thread on Steve Albini’s Electric Audio message board, became the PRFBBQ — or Premier Rock Forum Barbecue. While the lineup isn’t solidified yet, the festival is set to feature some of the best in noisy indie, a genre that privileges brutal riffage and feedback more than a solid pop hook. Of course, it’s called a barbecue for a reason, as there will be potluck-style food available and plenty of good beer from a number of breweries. Saturday and Sunday will be held at The Cure Lounge, and the venue for the Friday date is still up in the air. Check back here or their Facebook for updates.

Louisville Outskirts Festival
October 9 – 11
Schedule and venues TBA
louisvilleoutskirtsfestival.com
The Louisville Outskirts Festival is returning again this year for what promises to be another awesome event. Co-founded by Carrie Neumayer and Stephanie Gary of Julie of the Wolves, the Louisville Outskirts Festival is designed to engage, support, inspire and encourage women in the community, as well as to highlight some of the best of like-minded musicians outside of the city. The plan this year is to expand their 2014 Rock Shop format into Girl Rock Louisville, which offers longer sessions with aspiring musicians, helping to empower them to make their own art. Last year’s Rock Shops helped form the band Sorry Mom, so we can only hope for more of the same this year. Proceeds from the event will go directly to establishing Girls Rock Louisville, which will hopefully develop into a longer and recurring program.

Louder Than Life
Fall (date, schedule and details TBA)
For fans of metal, new or old, the Louder Than Life Festival is your place. Held last year at Champion’s Park on River Road, Louder Than Life celebrated all things heavy, be that classic-rock leaners like Judas Priest or veterans like Vinnie Paul from Hell Yeah or newer acts like the intimidating Mastadon. While the details for 2015 are limited, the festival is returning again this year and does promise the same mix of load amps, angry vocals and tons of craft beer, bourbon and local food. You can check in here at LEO or louderthanlifefestival.com for more info, as they plan to have some more details out in June.

In addition to all of the festivals around the area, there are a number of concert series in the area, which offer smaller, more intimate evenings spread out over the course of several weeks or months, rather than one long weekend.

Highlands Summer Concert Series
The corner of Bardstown Road and Eastern Parkway is a busy intersection, home to a number of businesses. The band In Lightning, who play a colorful and multi-instrumental blend of symphonic rock, saw an opportunity there, and have developed a concert series that runs periodically throughout the summer, either on Friday or Saturday nights in May, June, July, August and September. While In Lightning is the headliner for all the events, there are different openers at each, so you never really know what to expect. On top of that, Qdoba offers dollar beers and food specials at each event. You can learn specifics at the band’s Facebook page in terms of specific dates and other performers.

Sunset Concert Series
Located at Foxhollow Farms, the Sunset Concert Series is for folks looking for something family friendly and relaxed. Held on the second Friday of each month, the Concert Series has already kicked off with a May 8 show featuring Kyle James Hauser. Future events include the Junk Yard Dogs, A Lion Named Roar with Howell Dawdy, Small Time Napoleon with Nellie Pearl and more to be announced. Attendees are invited to bring blankets and chairs, for a picnic-style concert held in a scenic location, replete with food and drinks from local vendors.

Rye Back Porch Sessions
Having just kicked off on May 21, Rye’s Back Porch Sessions is exactly as promised, an intimate evening with some of the best in local music. The band Old Baby kicked the event off this last Thursday, a preview of the quality ahead. Future performers include, but aren’t limited to, Twin Limb, Young Widows, The Hot Wires and 1200, all of which offer a unique voice and perspective on Louisville music. The shows are relatively early, starting at 5 p.m. with food and drink, kicking into high gear at 7 p.m., so they don’t run too late on a work night, as the event occurs every third Thursday from May until September.

Waterfront Wednesdays
WFPK’s monthly showcase — which has already featured Shakey Graves (April) and hosts Jukebox The Ghost on May 27 — takes place on The Big Four Lawn. A relaxed atmosphere when the sun is up and assuming a more music festival-like vibe once it drops, Waterfront Wednesdays are a good way to catch, for free, acts that you would normally pay $20 to see. For instance, on June 24, catch Bela Fleck and Abigail Washburn with Pokey LaFarge.

ReSurfaced Series
Resurfaced opens back up on June 4. Keep your eyes on their Facebook (they are unveiling a new website soon) for the announcement of their forthcoming concert series, which features Nick Burke, Jalin Roze, The Deloreans, Fredrick The Younger, Karass, Lydia Burrell and more.