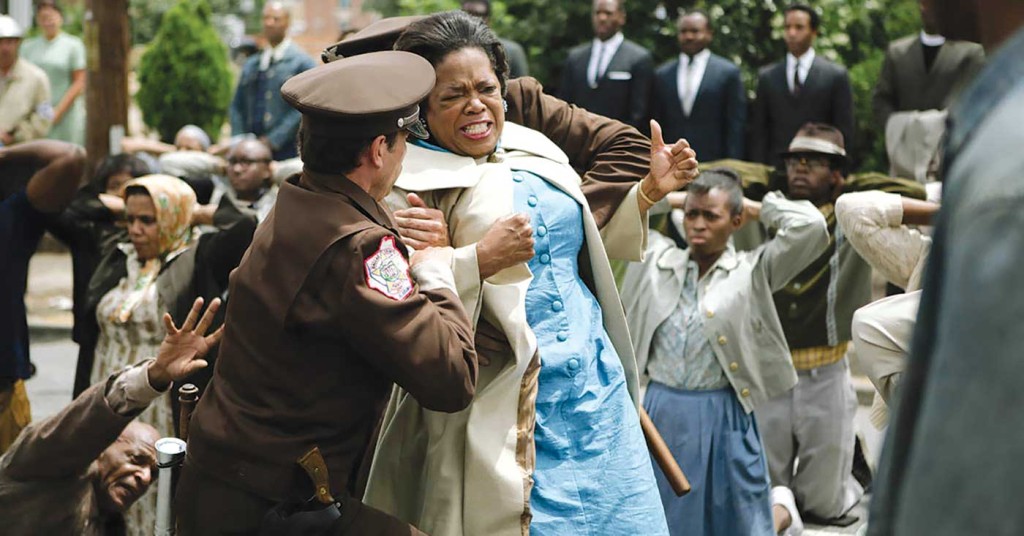 FIFTY SHADES OF GREY
2015; $19.98; R
This week we’re taking a cue from all those lazy corporate news outlets (you listenin’ CNN?) And just reprinting a bunch of social media comments. It’s easy money. Twitter’s @Bound2Pleas tweets, “Christian Grey comes from Dakota? Me 2!”, while @ChastityBlows tells us, “VFD used jaws-o-life to untangle m&d after the movie. Porsche ruined.” It’s the somewhat erotic tale of young Dakota Johnson who falls under the spell of Dominate Jamie Dornan, gaining personal power, self-awareness, vertigo and rope burns as his submissive. The studio didn’t have the balls to match the book’s explicitness — which would have resulted in a profit-slashing X-rating — so we get lame shots of beautiful, healthy naked young people instead. It is awesome.

SELMA
2014; $17.98-39.98; PG-13
Shivelyite @BlackNBlue calls this, “a dramatic reenactment of the heroic 1965 peacekeeping efforts of dedicated, outnumbered Brother Bears standing tall against a radicalized church, it’s members driven to a frenzy by Pinko Commie TV reporters.” David Oyelowo is amazing as Rev. Martin Luther King, but the real star is director Ava DuVernay, who perfectly captures the street-level tension and man-behind-the-myth fear of King and his rag-tag group of followers. One of the best movies we’ve ever seen.

JAMAICA INN
2014; $24.98-34.98; UR
@TartInTartan writes: Ach, Jessica Brown Findlay (“Downton Abbey”) abuckles her best muddy corset as the woman-child orphan doomed to barmaidenhood at her aunt’s (Joanne “Wolf Hall” Whalley) moldy, remote inn, flush with dark secrets. Ascared and alone, she bonds with shady, hunky cousin Matthew McNulty (“The Paradise”), which leads to stirrings of romance within her bosom. Her loins too, though nary a sword dance is e’er acomin’ — her ribbands doomed to stay upon her snood, as recorded in Daphne Du Maurier’s fine novel. The Cornwall accents be nar’ gibberish a’ times, but that’s as it should be.

MAD MAX
1979; $14.98; R
In 1997 our old buddy Dave Conover wrote: Where you going? Wait a minute! You want power, right? Deee-troit heavy iron with a Crocodile Dundee differential? Here’s the finest 1979 Mad Max you’re likely to find! Now, I’ll admit it’s not the best flick to be shown last at a drive-in — which is how I experienced it at the long-dead Preston back in ‘83 — but there’s more flying gravel and chipped paint here than Fairdale on a Friday night. This glossy saucy Aussie import introduced Mel Gibson to the up-over and put a lot of late-‘70s American Motors products through their paces. That’s right, your granny’s Pacer actually penetrates a tractor-trailer rig (this IS science-fiction) and Mom and Dad’s Matador transforms into the formidable V-8 Intercepter! A terrific crack’em’up that spawned an even bigger sequel, “The Road Warrior,” and much of the fashion seen crawling the sidewalks of Bardstown Road. Oh, and the cars weren’t the only thing ‘mericanized about this one — the moronic stateside producers had it dubbed … into English! (Now available in a Blu-Ray Collector’s Edition.)

MR. TURNER
2014; $31.98; R
UofL professor @ArthurCPharzee writes: Timothy Spall, who delighted as Wormtail in those dreadful Harry Potter films, takes us on a biographical sojourn into the life of renowned 17th-18th Century artist J.M.W. Turner. After the death of his father, he sexually exploits his governess/housekeeper before finding solace deep in the nether regions of Chelsea’s famous brothels. From there he famously traveled the world, painting, debauching and generally cheezing-off both his host gentry and the Royal Academy of Arts. Today we rightly celebrate his genius of living a wild and carefree life without ever doing a day of work. This, Dear Reader, is Art.

MURDER OF A CAT
2014; $27.98; UR
@NowYusuf sings: I love my dog as much as I love you, but you may fade; my dog will always come through. He spoke to me of this cameo-comedy, wild with the moon-and-stars of Hollywood, all dreaming about the world as one, and I found it as delightful as Allah intended. J.K. Simmons, Nikki Reed, Teaser Blythe Danner, Firecat Greg Kinnear, Ted Raimi and a host of others tell the tale of a grown man (Fran Kranz) living with his mother, who goes searching for the truth when he finds his pet cat dead. What will he leave us this time?

PATLABOR: THE MOVIE
1989; $19.98-39.98; UR
@PacificRimjob insists: The great-granddy of all Mecha Movies! After devastating earthquakes, the Japanese rebuild using thousands giant robots called Labors — which are susceptible to an evil virus that turns them against the populace! Only an undermanned, disrespected, and underfunded branch of the Metro Police can protect us — and that means destroying the recently-rebuilt parts of Toyko! Now available in a numbered 10,000-copy Limited Edition Collectors Edition with lots of new artwork, docs, and an 184-page “Archives” book! Buy! It! Now!

MAHOGANY
1975; $15.95; PG
Diana Ross, lead singer of The Supremes, made her acting debut in 1968 wearing a nun’s habit in the “Tarzan” TV series. Four years later she would redeem herself – and blow away her critics – as Billie Holiday in “Lady Sings The Blues.” This movie was her followup, a straight dramatic roll that didn’t give her an opportunity to use her amazing vocal gifts. She plays a child of the slums, driven to make her mark in the world of international high fashion, regardless of the cost. With Billy Dee Williams as the love interest, and Anthony Perkins as the bad guy, now available in a collectible 40th Anniversary Couture Edition.

ZOMBIE KILLERS: ELEPHANTS GRAVEYARD
2015; $12.99-26.99; UR
In one sense this is just another zombie flick, one of the hundred-million-or-so that crawl hoary from the grave each week. But this one’s special for two reasons: First, it’s the only rotter film we know that has “fracking” as part of its backstory, and second, it stars/cameos Mischa “The O.C.” Barton, Billy “Titanic” Zane, and Dee “The Howling” Wallace. First-time actor Michael Kean gets the most screen time as the rebel youth who decides to break free from their “safe” fenced-in city. Doesn’t really go all that well …

A More Complete Listing and Free Vids at  videotapeworm.com