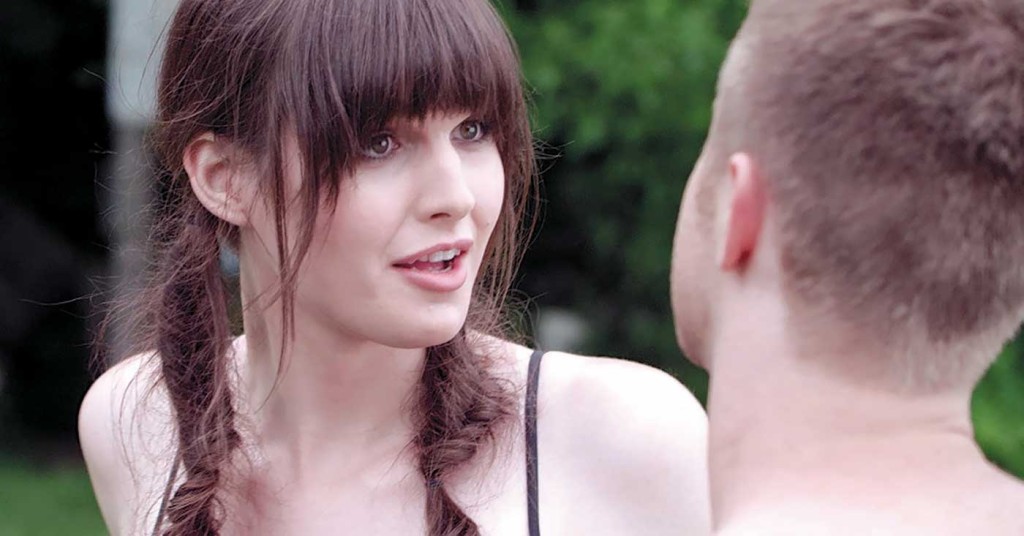 50 TO 1
2014; $19.98; PG-13
The true story behind Mine That Bird, the 2009 Kentucky Derby winner born with a crooked foot, largely discarded by the industry, who is rescued and trained by a group of New Mexico misfits. Skeet Ulrich is completely believable as grizzled trainer Chip Woolley, with Christian “Leverage” Kane as cow-poke co-owner Mark Allen. Vet-ham William Devane pops up as veterinarian/co-owner Leonard Doc Blach. We must see 100 of these “inspirational true stories from the world of sports” every month, but this one is that rarest of animals: A born winner. Enjoy.

BOY MEETS GIRL
2014; $17.98; UR
This sexy romantic romp about a trio of young adults stuck in the bowels of a small Kentucky town is a hoot. The dating-pickin’s are slim for Robby (Michael “Twilight” Welch) when he finally notices that his life-long best friend, Ricky … is a girl! A transgender girl. A beautiful, sweet and intelligent pre-op transgender girl who, also fed up with the lack of dating-pickin’s, also decides to try dating a girl. In walks long-blonde Alexandra Turshen (who has an amazing nine films coming out this year) and – you guessed it – they are both smitten. But seeing Ricky with Francesca makes Robby realize he wants to be with Ricky! A wonderfully real, funny and very human bit of nonsense that you’ll be talking about for weeks. Terrific.

OTHER DVDs of INTEREST

[REC]4: APOCALYPSE
2014; $17.95; R
The fourth and maybe-final chapter in the Spanish horror franchise that spawned the American “Quarantine.” The only survivor of the grotesque demonic virus, TV reporter Manuela Velasco, is spirited away by authorities and held in the bowels of a oil tanker for “examination.” Not the best of the series, but much better than any of the Anglicized versions.

FROM A WHISPER TO A SCREAM
1987; $15.89; R
An overlooked 80s horror finally gets the Blu-Ray respect it deserves. Originally shown in theaters as “The Offspring” then returned to its script-title when first released on home video, this creepy four-story anthology features Vincent Price, Clu Gulager (who famously fought Louisville zombies in “Return Of The Living Dead”), Cameron Mitchell, Martine Beswick and a host of other dark luminaries. Comes complete with an infectious bonus feature on the bygone days of Super 8 filmmaking, and an over-the-top “making of,” this is one of the best – and grisliest – Halloween discs in our collection. Our highest recommendation.

NEW TRICKS: SEASON 11
2014; $23.98-39.98; UR
Britain’s single-most-popular cop show (and they must have a million of them) this thing rawks the “Cold Case” genre in ways that American TV can only dream of. The ever-evolving cast, currently headed by breathtaking Tamzin “EastEnders” Outhwaite, goes after smart/lucky/protected criminals hiding in plain sight. The crimes often seem to mesh with obscure, half-forgotten real events a generation removed, with “X Files”-like conspiracies at their heart, making the shows’ spot-on humor all the more surprising. A terrific cast, great writing and truly amazing guest stars make this the guiltiest of pleasures. You’ll thank us.

NOBUNAGA THE FOOL
2013; $39.98; UR
The latest release in anime artist Shoji Kawamori’s popular “The Fool” franchise posits two warring worlds: The Eastern Planet and the Western Planet, bound together by mystical forces. Then an “heretical girl” has a sacred vision of a young man who may be their saviour-king, but the boy she sees, Nobunaga, is doomed to die within his mecha armor at the hands of his best friend. A near-Shakespearean tale told with blistering animation and heady dialogue heavy with love, loss and betrayal. Entertaining, absorbing and addictive.

PADDINGTON
2014; $19.98; PG
A perfect, lively realization of Michael Bond’s timeless kid’s tales about a fish-out-of-water CGI bear who moves from the Peruvian jungle to big city Britain. Simply wonderful, regardless of your age.

THE GAMBLER
2014; $17.98-22.98; R
This dark Mark Wahlberg outing didn’t exactly burn up the box office, but we liked it. He’s a college professor with an all-consuming passion for high-stakes gambling, literally wagering his life against the combined greed of a group of violent, powerful criminals. Jessica Lange pops up as his snooty mom, though John Goodman nearly steals the show as the deadly loan-shark/father-figure. Brie “Community” Larson is a little out of her depth, but adds much-appreciated eye candy as Wahlberg’s “win or die” philosophy takes its toll on everyone involved. Powerful and definitely different.

THE WEDDING RINGER
2015; $22.98; R
We’ve made no secret that we’re not big fans of Kevin Hart, and here he’s front-and-center as the foul-mouthed “Best Man for hire” for lonely, socially-challenged grooms with no one to stand by their side on the big day. That groom is Josh Gad from “New Girl”, about to marry “Big Bang Theory”s Kaley Cuoco-Sweeting (stealing every scene she’s in), who suffers through Hart’s patented abuse until they become best buddies at the film’s end. Only in the movies.

Given that this film began in 2008 and moved forward in fits and starts for a half-dozen years under several directors – thanks to a team of 10 inept/crooked producers – it’s a freakin’ miracle that it was ever released at all, much less that it is such a solid, fun little comedy. The always-welcome Jessica Biel plays a waitress who winds up with a nail in her brain (whoopsie!) causing her to behave in outrageous ways. Poverty and happenstance lead her to Washington DC where she falls for green Senator Jake Gyllenhaal, with Beverly D’Angelo, James Marsden, Bill Hader, Kirstie Alley, Tracy Morgan, Paul Reubens, and James Brolin along for the ride.

Being a pair of unapologetic degenerates from the Woodstock Generation, we can’t help but love this film. Allison “Terra Nova” Miller (who grew up in Lexington, KY) stars as one of the million lost songwriter-souls of NYC. Broken and defeated, she finally gives up and heads home to the idyllic farms of Woodstock, NY. Okay, so it’s got a Lifetime movie-of-the-week plot, but it’s also sweet, romantic and funny with wonderful music and co-stars/cameos that include Rumer Willis, Brittany Snow, Katey Sagal, and Jason Ritter.

BLOOD OF THE VINE: SEASON 3

Only the French could dream up this mix of historic vineyards, centuries-old family manses and a clever sleuth who spends his days sipping Bordeaux and his nights sniffing out murderers. Beloved veteran actor Pierre Arditi is clearly having the time of his life as brilliant aristocrat-hero Benjamin Lebel, who leads a small troupe of proteges, police inspectors and women – oh! the women! – in merry grape-instilled adventures. Goes down like a sex-loaded starlet: endowed, jaunty and erotically scented, with every part perfectly balanced to ensure your satisfaction. Enjoy.

Joaquin Phoenix was nominated for an Oscar as Doc Sportellos, the central character in this crazy-crime mix of psychedelia, paranoia, noir gumshoes, dope, surf music, and sex. Smokin’ nubile Katherine Waterston from “Boardwalk Empire” provides the necessary nudity – stealing the movie as far as we’re concerned – while a seeming endless list of cameos and lesser-lights (Joanna Newsom, Josh Brolin, Eric Roberts, Serena Scott Thomas, Maya Rudolph, et.al.) wander in and out to keep the insanity-level high. What’s it really all about? Oh, about 148 minutes, but they are 148 wonderfully wacky minutes that defy easy categorization.

LOOK OF A KILLER

Ever since “Dragon Tattoo” we’ve been hooked on Scandinavian thrillers. This Finnish entry follows a former Russian “operative” (read “brutal assassin”) who abandons that life, seeking peace, if not absolution, as a PI/businessman in Finland. Unfortunately, crime exists everywhere, especially if you know as much about it as he does. Reminds us of James Cagney’s great noir crime dramas, but with that cold, clean Nordic edge. Eight blistering episodes starring Samuli Edelmann.

It is embarrassing that there exists an entire generation of Americans who don’t know the name Phil Silvers. One of our country’s most legendary comic performers, his character of Sgt. Ernie Bilko, the con-man leader of a dedicated squad of Goombas, saps, and partners-in-crime spawned countless imitators, including “McHale’s Navy” and “Top Cat.” By Season Two his gang of Bortsch-Belt legends were at the top of their game, bolstered by a raft of clever guest stars from Ed Sullivan to Bing Crosby. Blistering b&w comedy, the likes of which simply aren’t seen today. Funny. As. Hell.

Love it or hate it, “The Jeffersons” won an Emmy and still stands as one of the highest rated, longest running sitcoms in American TV history. This season is remembered for its 4-part “The Jeffersons Go To Hawaii” storyline that finds George (Sherman Hemsley) and his punching-bag neighbor, Tom (Franklin Cover), marooned on a “deserted” island, though the season opener in which the same two out-of-shape middle-aged knotheads compete in a marathon is our favorite. Go on, you know you want it.

There have been literally scores of Musketeer movies over the decades, but only the BBC has the cohunes to create a TV series this sexy, over-the-top, and smart. Soldier/Bodyguard Porthos (Howard Charles) assembles and leads a trio of brilliant rogues – D’Artagnan, Aramis and Athos (Luke Pasqualino, Santiago Cabrera and Tom Burke) – and leads them into light, fast-paced and surprisingly intelligent missions for King and country, usually prompted by the machinations of evil Cardinal Richelieu (Peter “The New Doctor Who” Capaldi!). Our favorite this season was “A Marriage of Inconvenience”, wherein the lads must protect Perdita “The Tudors” Weeks from assassins. Swashbuckling at its best.

THE MYSTERY OF LORD LUCAN

Rory “Penny Dreadful” Kinnear is simply brilliant in this multipart British drama based on a real mystery from 1974. When the nanny for John Bingham, the 7th Earl of Lucan (Kinnear), is brutally murdered in the family home, the Earl is suspected. He then vanished without a trace – but we follow the desperate aristocrat in his supposed flight from justice, largely sidestepping the question of whether or not he was actually the culprit. The final chapter imagines his day in court, with jurors considering the real-world evidence gathered by police, along with eyewitness testimony of the days before and after the crime. Surprising TV with Christopher “Doctor Who” Eccleston, Catherine “Shadow Of the Vampire” McCormack, Michael “2nd Dumbledor” Gambon and Anthony “Buffy the Vampire Slayer” Head.

A husband and wife team of talk-show hosts dispense marriage advice – which usually bites them in the behind – in this Afrocentric made-for-TV comedy from the UP Network. Simpleminded and harmless with soaper Denise Boutte and David Banner from “Black Snake Moan.”

A More Complete Listing and Free Vids at  videotapeworm.com