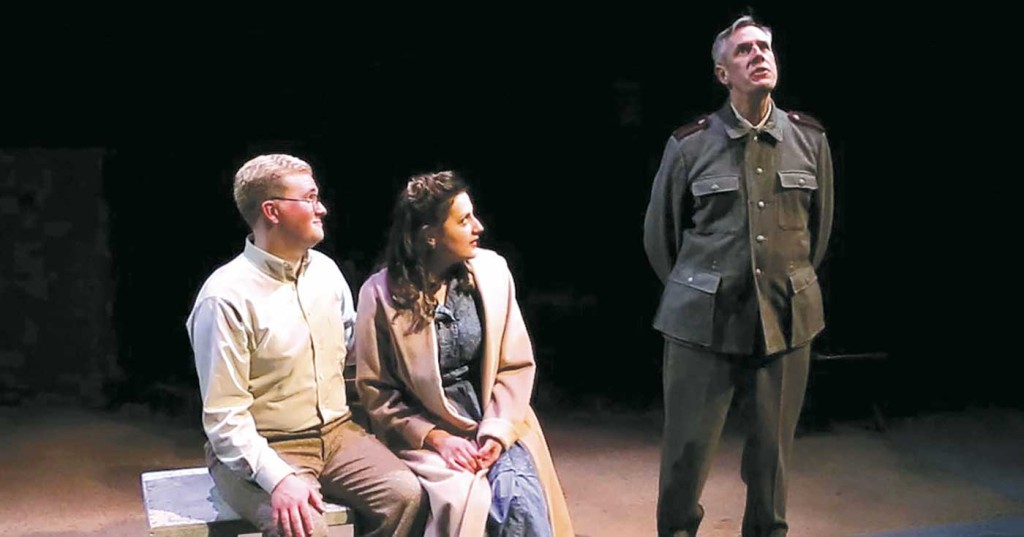 After the premiere of “Bonhoeffer: The Last Encounter,” Juergen K. Tossman, the playwright and director (and Producing Artistic Director of Bunbury Theatre) invited all the ordained clergy in the audience to join him on the stage for a brief and touching tribute to the memory of the German Lutheran minister, theologian and member of the Dietrich Bonhoeffer, who had been hanged in a Nazi death camp 70 years earlier to the day.

From post-performance conversations, it seems clear the play more than passed muster with those folks – as well it ought. It’s a well-written and technically well-executed piece of theater that’s been on Tossman’s mind for many years, and though it’s a break from the thoughtful comedies that he’s penned in the past, it extends his interest in the areas of social justice and theology.

The play is set in the prison cells where Bonhoeeffer spent the last two years of his life (designed by Alexa Holloway, who also handled costumes and props). His relationships are restricted to an unseen interrogator whose stentorian voice hammers away at Bonhoeffer in scenes that find the minister sitting in a brutal circle of blinding light (and the lighting by Jesse Alford and sound by Klaus Schnieder add much to the atmospherics throughout the play); a world-weary fellow prisoner, Klaus (played with fine mix of mordant cynicism and principled optimism by Matt Orme); an avuncular prison guard, Heinrich (Ted Lesley) and, in a poignant moment, a final encounter with his fiancé, Maira (Courtney Glenny).

It’s a play set in a small and static world – but the Bonhoeffer of this world is largely living in his mind. And at the center of the play, Bonhoeffer’s interchanges with Heinrich (a character inspired by actual events) give Tossman plenty of scope for exploring much of Bonhoeffer’s theology. They talk about the Sermon on the Mount; about the conflicted nature of patriotism and religious morality in an unjust society, about Christian notions of compassion and responsibility. And though Heinrich isn’t an educated man (in one comic moment he dismisses out of hand the notion that Christ was a Jew), the intellectual prisoner and his kindly keeper develop a deep bond. For Bonhoeffer, that bond leads to some small pleasures – a piece of chocolate, a sip of cognac – and larger measures – that final meeting with Maria, and eventually an offer to assist Bonhoeffer in an escape attempt. It’s a fine device that allows Bonhoeffer’s thoughts to unfold in a slow, stately procession.

And I think it’s a comforting affirmation of the gentler aspects of Bonhoeffer’s theology — a theology that has inspired generations of thinkers.

On the other hand, from a purely dramatic standpoint, the script — and Chase Gregory’s fine, disciplined performance — offers us a Bonhoeffer that arguably lives almost exclusively in his mind. His depth of thought, generosity and compassion are clearly delineated. But the Bonhoeffer who lived in the world is left largely in the shadows. As a theologian and openly active member of the anti-Nazi resistance, he is known to have inveighed publicly against Hitler and Nazi party even after Hitler’s election to the Chancellorship and is reported to have prayed for the defeat of the German armies during World War II. He seems to have been capable of outrage and indignation, but this Bonhoeffer shows us little of that.

Happily, though, there are moments of indignation. They come during an excellent little side excursion to the United States, where early in his career Bonhoeffer met an African-American social worker named Frank Fisher who brought Bonhoeffer to the Abyssinian Baptist Church in Harlem, where he heard the sermons of Adam Clayton Powell, Sr. It was those sermons, heard in the early 1930s, that propelled Bonhoeffer into a new brand of theology. And it’s Powell, played by Clydetyrone Harper, who ascends a pulpit and tells his congregation in a fiery voice about Bonhoeffer’s incarceration by the Gestapo, that brings some satisfying fury to the proceedings.

The Humana Festival of New American Plays closed on Sunday with a marathon performance of the entire slate of plays. A set of three Ten-Minute Plays served as a sweet finish to a memorable festival. Patricia Cotter’s “Rules of Comedy” (directed by John Rooney) was as witty a shaggy dog story as you could ever hope to see — with the nature of comedy itself bearing the brunt of the humor. Emily Stout gave a feisty performance as a young woman aspiring to learn comedy, and Conrad Schott was an excellent foil as the tutor who thinks that his charge just isn’t really funny.

“So Unnatural a Level,” by Gary Winter, directed by Les Waters, was a hilarious little set piece about in ineffective bureaucrats and hazmat-clad lab rats confronted with an ecological disaster of amusing proportions. As Susan, a young intern and an apparently invisible office worker, Lexi Lapp and Kayla Jackmon, both members of the Atlanta Apprentice/Intern Company, gave delightful performances. And in “Joshua Consumed and Unfortunate Pear,” by Steve Yockey, directed by Meredith McDonough, Andrew Garman and Megan Byrne perform as perhaps the only couple in the world who would argue over the promise of immortality; and Rachel Leslie plays a very irritable Death — who hates being summoned under false pretenses. •