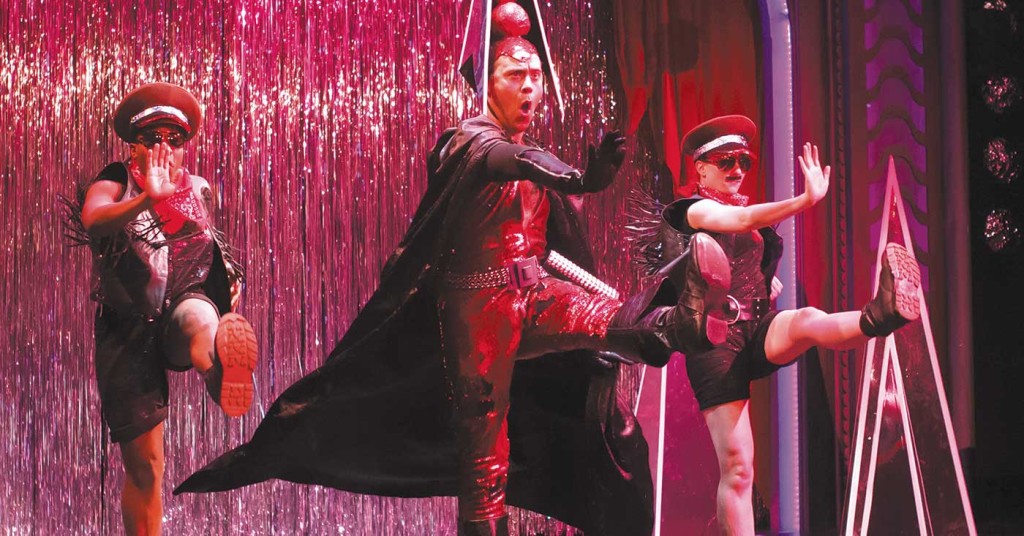 Some 30 years ago, a New York Times critic repeated what was then a pretty common assessment of Actors Theatre of Louisville’s Humana Festival of New American Plays: that the typical play dealt with “four people sitting at a dinner table.” Though that was never completely true, such plays are still staples of modern drama — and this year’s festival offers compelling illustrations of why that is. If you haven’t yet seen them, you still have time to catch Colman Domingo’s “Dot” and Jen Silverman’s “The Roomate.” Those in search of theater that subverts traditional narrative — and will provoke plenty of thought, conversation and debate — should make every effort to see Charles Mee’s “The Glory of the World, which uses the power of a spectacular proscenium production to lure the audience in a radically unexpected direction. All the Humana plays remain in repertoire through Sunday, so there’s still time to catch the entire lineup, including a couple of plays that premiered during LEO’s “Fake Issue” week, when we take a break from both the real and the theatrical world. Here’s the delayed Humana coverage.

“I Promised Myself to Live Faster,” directed by Dan Rothenberg (based on a text by Gregory S. Moss and the Philadelphia’s Pig Iron Theatre Company), is firmly rooted in narrative traditions. In fact, it’s a delightful tangle. You could call it an intergalactic, picaresque, fish-out-of-water, buddy story about a reluctant hero who falls through a glory hole and winds up on an Arthurian quest for what amounts to the Gay Holy Grail. Along the way, Tim, our hero, played with comically earnest glee by Mikeah Ernest Jennings, receives guidance (and a glass of Riunite White) from a glam-noir bartender (Jennifer Kidwell), a heroic charge from a trio of nuns (Kidwell, Mary McCool, and Michele Tauber) and partners up with a treacherous, closeted cosmic security officer (Dito van Reigersberg).

Moment by moment, the play is a feast of one liners and comic allusions. But, if the uninhibited script kept the audience laughing, so did the over-the-top ingenuity of the production values guided by Creative Producer Alex Torra. A shimmering scrim of silver ribbons added a celestial billow to every entrance (scenic designer, William Bole). Time after time, the audience erupted in laughter at the sight of yet another outrageous — and yet perfectly correct — costume (designed by Machine Dazzle). Lighting (Jiyoun Chang), sound and campy music (Robert Kaplowitz), as well as exuberant choreography (Sam Pinkleton) often earned gasps of appreciation. Pig Iron is masterful with collaborative dramaturgy. But the opening scene that sets up the action offers an amazing solo performance by Dito van Regensberg as a husky-voiced, androgynous chanteur/chanteuse — what’s the gender-neutral word? chanteu? — delivering a smoky ballad full of portent.

The annual Acting Apprentice Company production also premiered during our gap in coverage. “That High Lonesome Sound,” directed by Pirronne Yousefzadeh, with eight loosely connected segments written by Jeff Augustin, Diana Gristanti, Cory Hinkle and Charise Castro Smith. And performed with elan by a commendable cast of 20 (who also collaborated with Ben Sollee to create original music) touches on themes related to bluegrass and Appalachian music. Throughout this year’s ATL season, the Apprentice Acting Company has acquitted itself distinction (several of the members have been superb in demanding roles during both the regular season and the Festival). They continue that here. But as for the scripts: this is Kentucky, where many have a deep and abiding interest in this music and its culture. So perhaps it’s self-righteous and unjust to think that these scripts, though they sometimes spring from resonant ideas (a young woman whose love of music is crushed — momentarily — by a controlling brother, then redeemed by the discovery of a mysterious buried mandolin that becomes part of family lore; a fable about an ancestor who becomes a banjo; a satire about a venal attempt to turn the classic labor song, “Which Side Are You On?”), feel a bit like cultural strip mining. I found myself wishing the playwrights had dug deeper into the pit.

The Bard’s Town Theatre is hosting the 8th Annual Finnigan Festival of Derby City Playwrights, which opened last week and runs through April 11. This festival (produced by Brian Walker and Shaun Kenney) is a stunner, offering a dozen distinctive, imaginative, sharply-written ten minute productions from as many writers and directors, featuring lots of swagger-filled, charismatic performances from actors to reckon with. Here are just a few highlights from a fine evening of theater.

Tad Chitwood’s “Saint Bob”(directed by Jeremy Sapp) introduces a health inspector (Bryce Woodard, who makes remarkable contributions throughout the evening) who is outraged by social media ingrates who “fucking love science” – but not enough to understand it. When Bob swallows a coiled metal spring, what at first seems a thin social media satire morphs into a verbal romp full of philosophical pyrotechnics and random fun that culminates in blazes of Shakespearean rhetoric and, ultimately, “the miracle of spring” (with great performances by Tamara Dearing, Natalie Fields and Mike Mayes).

“American Goddess” by Rachel White (directed by Melinda Crecelius) is a searingly funny send-up of the ruthless world of fashion modeling (with Dearing, Jane Mattingly, Jessica May, Michael Roberts). Woodard’s “In the Closet” (directed by Olivia Plath) features Kelly Kapp as a therapist in a couples counseling session with a hapless man (Mike Mayes) — and his closet monster, Tornash (Brian West). “Sausage Fest” (by Eli Keel, directed by Kelsey Thompson) finds a gay man in a cardiac unit — while his brother and lovers squabble about love and compassion (Corey Long, Joe Hatfield, Michael Roberts, Brian West, Woodard). “Gamers 4 Life” (by Brian Walker, directed by Natalie Fields), gives us two emotionally broken gamers (Corey Long, Kelly Kapp) who find safety in the solace of online isolation — until the one attempts to bridge the gap and the other crumples and regroups, in a brave and poignant moment. •