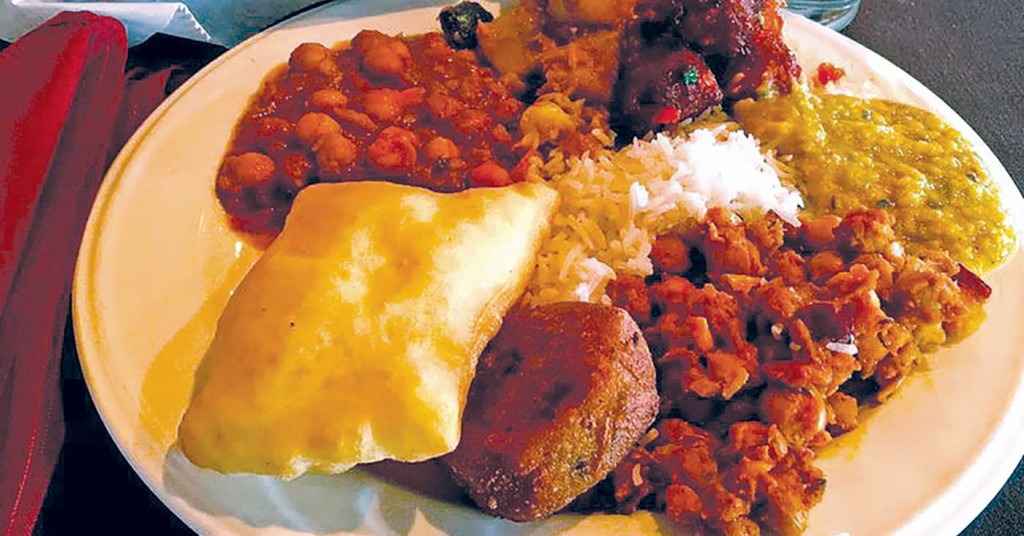 Let’s touch down for a couple of quick hits on the metro dining scene this week. Uptown Café has been a Bardstown Road landmark for 20 years, serving always reliable fare in a friendly setting that keeps bringing people back for more.

Shandaar Indian is so new that its well-crafted Facebook page still has that new-page smell. So far out in the East End that it feels closer to downtown Shelbyville than downtown Louisville, it proved to be well worth the trek.

I didn’t bring high expectations to the 20-mile trip, frankly. Sure, the gang of foodies on the LouisvilleHotBytes forum had been talking the place up, but its aggressively suburban location placed it well outside the region’s usual good-eats zones.

Moreover, it is housed in the spacious facility that was once occupied by a Chinese buffet that justly earned one of my lowest review ratings ever. And just to put the onions on the naan, it features a lunch buffet, not always the most inspiring culinary option.

But, Indian! We fired up the jalopy, headed east and were rewarded with a delicious Indian meal — yes, from the buffet — that was loaded with flavors that snap, crackle and pop.

I can’t testify to how much the current occupant has tuned up the look-and-feel of the place. But I can tell you that it is classy and upscale now, a large space broken into several smaller rooms; and a small but colorful bar with comfy lounge chairs and a sofa nearby.

There’s also a marble 20-foot replica of an Asian fishing boat — surely a remnant of the predecessor eatery too massive to haul out — that has been smartly converted into an intriguing display of Indian knick-knacks, dominated by a pair of canvas elephants flanking an impressive statue of the elephant-headed god Ganesh.

The menu is extensive and appetizing, with a broad choice of more than 100 dishes, including plenty of vegetarian mains (mostly under $10) and lamb, goat, chicken and seafood entrees (generally $10 – $15), plus a dozen fresh-made Indian breads.

We’ll definitely be back for more, based on a broad sampling from the fine buffet, which features about a dozen main-dish options daily plus salads, desserts, chutneys and more. The selection changes daily and is faithfully updated on the Facebook page. We had a choice of chicken three ways: tandoori, tikka masala and drumstick curry — all featuring tender and juicy chicken — and veggie dishes, chickpea channa masala, matar paneer with peas and Indian cheese, yellow-lentil dal tadka, fiery aloo zucchini and vegetable biryani, plus rice, warm naan flatbread and much more.

The buffet is $7.99 and rich, creamy yogurt lassi drinks were $2.50, bringing an indulgent lunch for two up to an affordable $22.24. The staff is uniformly courteous and helpful. Their good work answering questions and keeping plates filled earned a 20-plus percent tip. •

To understand Uptown Café, it is helpful to recall the story of its now-departed older sibling, Cafe Metro, which opened around 1981, joining the then-growing Bardstown Road dining scene as an upscale, relatively conservative dining room tuned for the well-heeled diner who sought a good meal in an elegant setting without too many culinary surprises.

It thrived on that demographic for nearly three decades, but the Great Recession dealt it a mortal blow, and it closed abruptly in the autumn of 2009, citing “declining business.”

Starters, salads, pastas and mains offer an eclectic mix of American and Euro-Mediterranean influences, with entrees ranging in price from $9.75 (for basa fish tacos; the justly popular fried basa fish sandwich is $10.75) to $27.95 (for bacon-wrapped petite filet au poivre).

We dropped in for dinner with our friends Pat and Don, and among other things enjoyed  the blackened fish tacos. They were made with broiled fish, not grilled, and the fish was firm, flaky and mild. It came with a ration of fine fresh chipotle-scented slaw.

Baby kale and arugula salad ($9.95) was tempting, too, fresh tender greens, spicy sweet potato bits and other veggies in a tangy orange-ginger vinaigrette. Pork belly cubs made luxurious “croutons,” though they could have been more crisp.

A memorable dessert, Empress Carlotta, was a cake-like chocolate genoise filled with Chantilly cream and garnished with mocha buttercream and almonds. It was huge — enough for four to share — and rich and decadent.