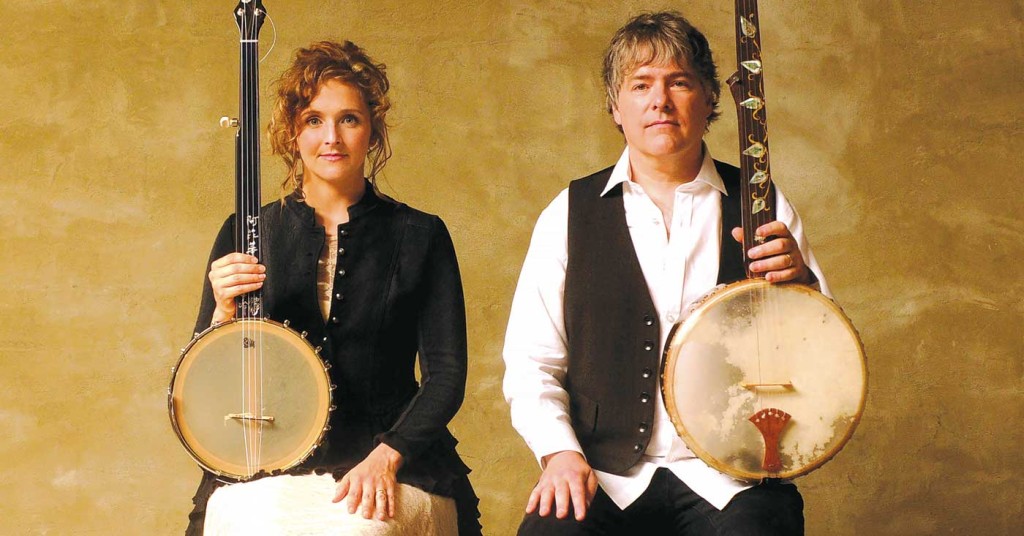 It’s been over a year since Béla Fleck and Abigail Washburn last brought their non-dueling banjos to Louisville. Now they’re touring in support of their first, self-titled duet album, a warm and delightful collection of newly-arranged traditional songs, originals and even a Fleck-arranged medley of two songs from namesake Béla Bartok’s “For Children” song cycle. LEO spoke to both artists while they were in transit to their concert at West Virginia University.

They’ve been touring together long enough now that they find themselves more at ease in the duo setting.

“It’s a blast, we’ve been having so much fun together,” Fleck says. “We’ve been touring together over a year now and it’s gotten to be that we really know the material, and we’re having a lot of fun playing it different ways every night, making every night unique. We’ve been playing so much that now it happens unconsciously, and if we try to practice a lot, it actually messes it up.”

“We’re not nervous about getting the music wrong any more,” Washburn adds.

The conversation then turned into a bit of a Zen guide to practicing and playing music.

“Music is a moving target, and you have to psych it out,” Fleck says. “At certain points when you’re learning music, you have to practice it a lot. Then you need to stop practicing and just play it every night, and let your unconscious take over and just let it happen. You have to figure out where you are in the curve and what’s needed each day. That’s part of the fun of being a musician, that it’s never the same from day to day.”

When they were here previously, they were proud parents of a newborn boy, Juno. Asked how he was developing as a road warrior, Washburn laughs, saying, “He’s the finest road warrior of the bunch. He is so fun to be on the road with; we got him started at three months old. We call it ‘the sleepover on the bus,’ and we’re all loving it. We decided to tour together when we found out that I was pregnant with Juno. OK, now’s the time, we have to get ready and go do this thing together. We don’t want to be apart, we’re going to have a little baby, and we want to be together.” Fleck picks up the thread: “We had played together here and there, just little things, as a duo, and we thought, ‘This is great, we should do this some time.’ Then when Juno came, it was like this is definitely the time to do it. We do not want to be one of those couples that’s split up all the time with a baby. So, that’s what we’ve been doing.”

The next issue was repertoire.“We started recording when Juno was four or five months old,” Washburn says. “We did not realize what a time commitment — the level of sleep deprivation, the spell we would be under … I don’t think we’d ever do that again. [But] we were able to write a number of songs together. Both of us had different ideas that we brought to the table, and then we fleshed them out together.” Fleck adds, “It seemed pragmatic, given the time we had, to start out with songs we knew, but hadn’t been recorded yet, like ‘Shotgun Blues,’ ‘What Are They Doing in Heaven Today.’”

Just two days after the intimate KCD Theater concert, they’ll play the 2015 New Orleans Jazz and Heritage Festival. Asked how they deal with playing such different types of venues, Fleck says, “It’s all energy and if you allow yourself to respond naturally, it works.”

Washburn adds, “In a smaller theater, you can focus on nuance. When we get on these big stages, I have to think in a big way, about my voice reaching the back of the field.”
Fleck: “You play harder and sing harder, and you don’t do a lot of slow songs, but it’s fun.”

Both artists have sweet spots for Louisville. Fleck noted his history, from his days with New Grass Revival, which had strong ties to Louisville, to the Lonesome Pine Special Series which included the birth of the Flecktones. Washburn had actually planned to go to law school in China, but came to Louisville for the International Bluegrass Music Festival, jammed with some new acquaintances at the Galt House and found herself with a recording contract. She also spoke of her connection through the University of Louisville, where she met Ben Sollee, leading ultimately to the formation of the Sparrow Quartet (with Fleck and Casey Driessen), and to long-lasting personal ties. They look forward to renewing their ties to their loyal fans here, as well. •