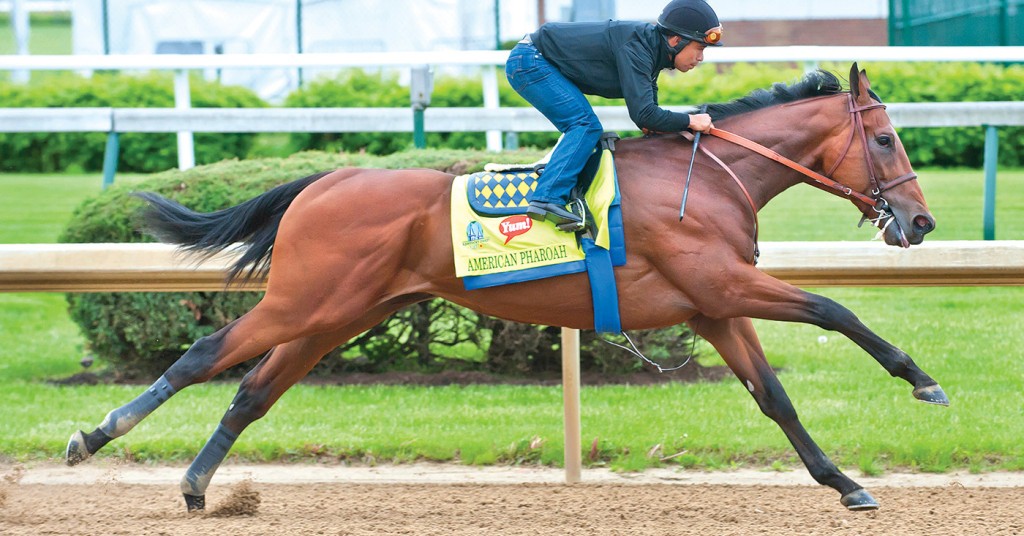 You know when you cross Central Avenue on your way into the track on Derby Day, there’s a big P.A. system with a helpful voice saying something like, “Welcome to Churchill Downs. Infield use Gate One. Clubhouse boxes Gate Five. And you can’t bring in umbrellas or that bottle of booze you’ve so cleverly hidden in your hat …”

Well, not this year. This year, when you come to the entrance, you will join in long orderly lines streaming steadily into the Temple of Racing — each Derby-goer grimly pushing along a golden stone to add to the Twin Pyramids, with the voice at the gate now speaking in a deep “Ten-Commandments” tone: “Pharoah says, ‘Bet me.’”

And who would dare not?

Who would defy Pharoah? Even if his name is misspelled. Who would dare pick another to win the Kentucky Derby?

Not me! Hey, I just come out here to bet a few frankincense on the ponies and hope to leave with a little extra myrrh. I know American Pharoah will be 2-1, or less, and all others will be juicy and ripe with generous odds, dripping with the promise of riches. But I won’t be tempted. I have seen Pharoah work over the track, and will follow Pharoah’s decree to “Bet me.” Or him, that is.

Just a few weeks ago, the 2015 Kentucky Derby was shaping up as a race for the ages, and maybe one of the best betting Derbies in decades. It was seen as a showdown among outstanding Derby prep winners, with as many as seven first-rate runners ready to to Run for the Roses for the 141st time.

But look what happened. All except American Pharoah stayed away until the final few days, leaving the media stage to just one horse, and his famous three-time Derby winning trainer Bob Baffert.

Then Sunday, the Pharoah worked over the track at Churchill Downs, saying it all in sparkling speed. “I am the one. The only one. Bet me.”

And it was truly a fine work. American Pharoah, a son of Pioneerof the Nile, flashed five furlongs (five-eighth miles) in :58 3/5 under jockey Martin Garcia. Garcia works closely with the Baffert barn, and will ride stablemate Dortmund in the Derby, with Victor Espinoza up on the Pharoah. The rider sat chilly as the big-legged bay clicked off furlongs in 11-plus seconds. Clockers caught Pharoah in 24 seconds for his last quarter mile down the Churchill stretch. I got him a little faster than that. But anyone can see the horse’s long, effortless stride. You’d have to say he’s sitting on a very big race.

But what about those other contenders? The ones we once thought so strong?

I don’t think they’ve gotten one bit weaker, and if you like one, my advice would be to stay in the saddle. All the top contenders can run, and are very consistent. Bettors might wish to remember how sharp Carpe Diem looked winning the Blue Grass. And the way Dortmund shown like sunshine in the Santa Anita Derby. I’m not too big on either of those horse’s pedigrees, though. To use a little lingo instead of explaining, I would note that Dortmund is double-inbred, top and bottom, to Northern Dancer. Sometimes that’s good for speed, but it won’t help with distance. Toss him.

Frosted is a horse on the improve, now that he seems to be breathing better after a minor throat operation. Frosted is an icing-white gray that could come running late under jockey Joel Rosario. International Star has had a perfect winter winning three-straight stakes in New Orleans. Kind of cool and determined.

Plus Materiality. He’s undefeated in three races, capped with a hard-fought victory over rock-steady competitor Upstart in the Florida Derby. And he’s got champion rider Javier Castellano aboard, looking for his first Kentucky Derby win.

Looking deeper, I could see Itsaknockout in the hunt. A totally ridiculous longshot I like, and don’t know why, is Bolo.

If you like one of those, go ahead and bet it in the Kentucky Derby. The proverb to remember is “Don’t let anyone talk you off your Derby Horse,” including this LEO Weekly Turf Scribe, who has picked three Derby winners in-a-row.

Personally, I think American Pharoah’s only question mark is the Derby distance. He does hail from the Derby-domimant Raise a Native sire line, but his dam’s side is without a trace of stamina blood. I know you’re not supposed to say anything bad about someone’s mother, but if this horse wins it’ll be because he’s a true one-of-a-kind.

Of course, lack of stamina in pedigree plagues most horses in North America. But there is one in this Derby from overseas that might thrive at 1 ¼ miles. That’s Irish-bred Mubtaahij. Yes, it’s a cross-tongued mouthful to say his name (pronounced Moob-taa-heege), but they’ll give him a number for the Derby, and it might be a good one to remember.

Mubtaahij raced first in England on grass (seventh at Newmarket last fall.) But then international trainer Michael de Kock shipped him to Dubai to race on dirt to prepare for the Kentucky Derby. That’s different than some of the imports of the past, for whom a Derby try seemed more of an afterthought for horses that didn’t run too well on European turf. This one’s been on the dirt.

Coming to Kentucky, Mubtaahij’s flight from Dubai stopped in Amsterdam, not London, before landing in Chicago – 7,000 miles. He vanned the short distance from O’Hare airport to Arlington Park, where he did two days in a quarantine barn, training at Arlington for a few days before vanning to Louisville Monday for the Kentucky Derby.

If you think that’s a journey. De Kock flew from his home in Johannesburg, South Africa, to Atlanta — one of the longest scheduled non-stop passenger air routes — then on to Louisville to meet his horse here earlier this week. Soumillon, the jockey, flies in from Paris.

Now, should you bet that horse?

Oh, no. You can’t bet on a horse if you can’t even say its name. It would be like throwing money away. Unless he called upon his pedigree to run past all of them down the stretch. Wiser to take Pharoah’s advice: Bet him. Or defy Pharaoh with one of his American rivals. Mubtaahij is strictly a wild stab.

For the record, make it 1. American Pharoah, 2. Mubtaahij, 3. Frosted.

My last advice is to make this the year you forget about “boxing” your bets in exactas and trifectas. Boxing is a betting technique that spreads the most amount of money with the least possible effect. Say it’s the exacta, bet the one you like on top and then say “all.” Go for the kale.