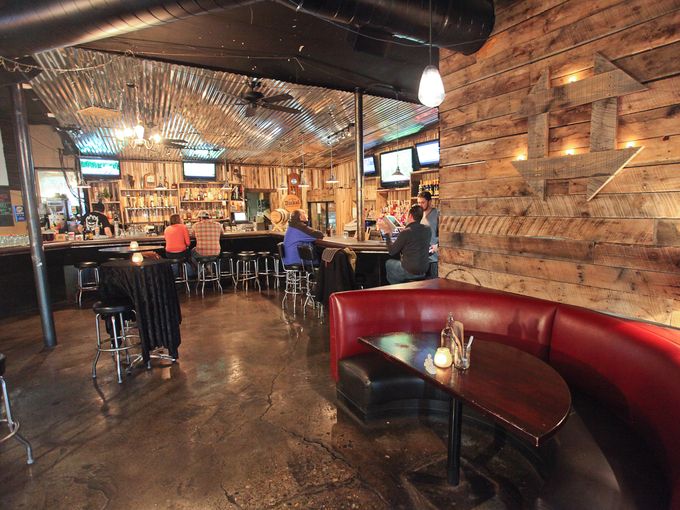 There’s something indescribably magical about a Sunday spent brunching amongst friends, sipping bubbly mimosas, reminiscing about the relaxing weekend that’s soon to come to an end. For bartenders, however, and the service industry in masses, there’s truly nothing like a Sunday following a brutally busy weekend slinging drinks, propelling booze into the mouth holes of our dear Louisvillians. It’s almost as if God gave us all Sunday, and a beautiful, scantily-clad exotic dancer walked up and threw glitter all over our eggs benedict, just before the fork hits our lips. We’re prepared to worship, and my friends and I decided to do so at The Monkey Wrench, just in time to try the new kitchen sublet with local grilled cheese food truck and former brick and mortar restaurant, Lil Cheezer’s: The Monkey’s Uncle Grill (Barret Ave).

Following a myriad of group texts and the slow trickle in of our friend group, we finally sat for brunch at 2pm. A group of about 12 of us, we were greeted by a sweet and attentive server who I later called a precious angel, only to find out that her name was ACTUALLY ANGEL. Serious kudos to the parents of the most aptly named child ever. She told us about the Bloody Mary bar, which we’d seen upon entering, and most of us took advantage of the heavy-handed mason jar of vodka we were given upon ordering and built our own concoctions with the apothecary of mixes, hot sauces and pickled veggies. About half way through this gorgeous array, I realized the twenty-seven cosmopolitans I’d made the previous night for a bachelorette party had simply put me over the edge for drink mixing for the day, and at that moment I would have rather had precious angel make me one herself. All the same, though, it was a great setup and probably a fun gig for anyone outside the drink-slinger realm.

Food orders came near after, as we all knew we needed to coat our stomachs for an afternoon of binge drinking and debauchery. The Monkey’s Uncle Grill hosts an array of solid and delightful “pub style” brunch food ranging from pork hash to a jambalaya-style shrimp and grits. Nary a vegetarian option for my several non-meat eating friends and I, though, aside from Orange Cognac French Toast. Restaurants of the world: it’s 2015. Some people don’t eat meat. Can we please, for the love of Hunter S. Thompson, think of something mildly more creative than bread soaked in egg wash? Don’t get me wrong, I adore gluten as much as the next brunch goer, but a few more options would have been delightful. Precious angel server, however, was able to accommodate my request of the “tater tot hash” with a few fried eggs on top, and if I would have been sober enough to order another side of that hash and donned a fanny pack, I would have carried it around on my waist and eaten it with a fork the rest of the day. Stellar.

Just as we all finished our foods, it became shot time. Word on the street was, (and by street, I mean my friends who had already begun taking shots) The Monkey Wrench makes their own version of Fireball by fermenting Old Forester and cinnamon. Clearly we needed another round after tasting the sweet nectar of something more bourbon-esque and less syrupy than Fireball, that finished with a glorious apple moonshine sensory impression. I’m a fan of bourbon and I’m a fan of mind-altering deliciousness. So, in other words I’d inject this if I could. Apparently it’s called “Jared’s Balls.”

About 3:25 p.m. the Sunday Funday gods smiled on us and “It Was a Good Day” by Ice Cube erupted over the speakers. And truly, it was a good day. Naturally, after bathing in a few rounds of Jared’s Balls, we needed to take over the stage (which hosts a bluegrass band in earlier brunch hours — you know, when normal people eat brunch?) and begin freak dancing to old school rap, because who honestly wouldn’t at 3:30 on a Sunday? Grateful that The Monkey Wrench staff found our rendition of “Shawty’s Gonna Be a Thug” moderately entertaining, they kept airing this station and dished out enough sass to keep us in line (a bartending trait I appreciate). At this point I needed a glass of chardonnay in one hand and a bourbon in the other, because I like to feel like a lady while twerking.

Slightly before 6 p.m. things were starting to get a little messy. Somehow, a plethora of the veggies from the Bloody Mary bar had ended up on our table and I remember vaguely a friend slapping another friend with a pickled haricot vert. There were, after all, pepper jack cheese cubes. Were we just supposed to leave them there?! Nah, those cubes needed to be in my mouth immediately. I had full intention, going into this project, of taking spectacular notes all day about my experience. But, let’s be honest, I had been guzzling Jared’s Balls and the last thing I wrote was at 5:48 p.m.: “Everyone was basically like an episode of Walking Dead.” It’s true, though, we were.

When I woke up the next morning thoughts raced through my mind, “How did I get home? Is the Monkey’s Uncle a real person? I think I may have sat on his lap and told him what I wanted for Christmas…” I rolled over in bed and saw my sleeping boyfriend, glanced at my phone and saw my last text message as a Lyft confirmation (at 9:02 p.m. – HA!), saw my wallet and could only think to breathe a sigh of relief and thankfully reference Ice Cube. It was a good day.