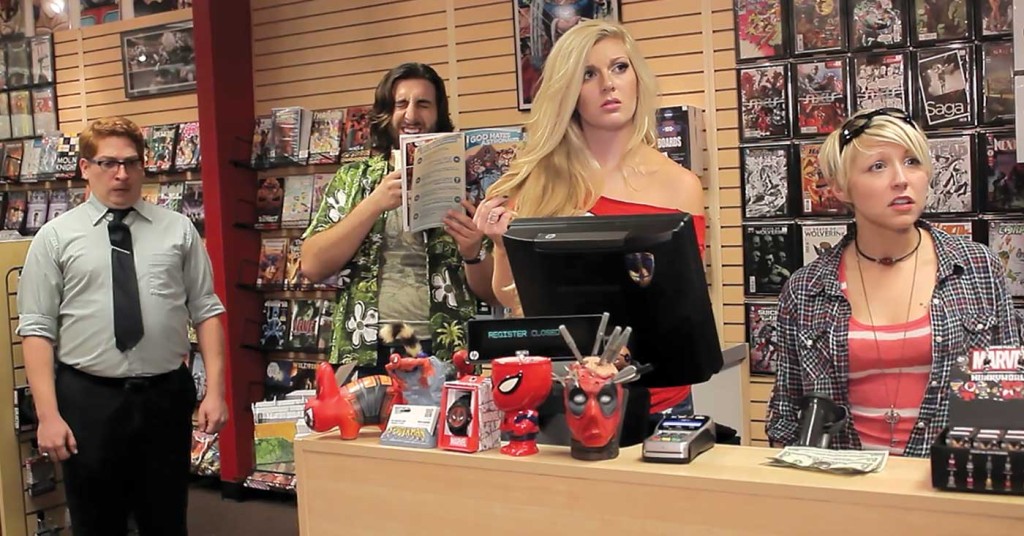 If you haven’t seen “Bagged and Bored” yet, then you’re missing one of the funniest web series on the Internet today. Produced and shot here in Louisville at local comic shop The Destination, by local production company Pixel Brain Productions, and starring completely local talent, “Bagged and Bored” centers around an often frustrated comic book store owner and his off-beat staff. It’s kinda like “Clerks” but without all the swearing and dick jokes. It could also be compared to ratings juggernaut “The Big Bang Theory,” if “The Big Bang Theory” wasn’t bogged down with spoon feeding a pop-culture, nerd-loving audience who probably thinks this is Will Wheton’s first role.
Anyway, the cast and crew of “Bagged and Bored” sat down with me for a round table discussion about the first two episodes (available now on Youtube), and episode three which will premiere next month. Matt Gaither (director), Rance T. Reinhardt (producer), Craig Williams (writer), Kent Carney (actor), Sean C. Keller (actor/writer), April Singer (actress), and Jake Reber (self-proclaimed musician/comedian/actor/multi-slash).

LEO: Before “Bagged and Bored” there was Pixel Brain Productions. Tell me about the origins of the company.
Matt Gaither: Well, [Pixel Brain] kinda came together when I was working on my first film “Zach Cooper’s Epic Speedrun.” I knew I couldn’t do this by myself, and when I found out [producer, Aaron Patterson] and Craig had film experience, I asked if they wanted to help out, kinda expecting them to say, “no.” But they did, and they’ve stuck around ever since.

LEO: How does “Zach Cooper” lead to “Bagged and Bored”?
MG: Brian Barrow, who owns The Destination comic book store, was a fan of “Zach Cooper” and told me, “If you ever have any future projects and want to film in a comic book store … use mine.” And usually no one gift wraps you a location for a film, usually you’re begging for it or paying for it or you’re just shooting it until the cops come up and shut you down. So we structured our next project around a comic book store. We were fans of a show Jake and Kent were doing at the time, so we knew right off the bat we wanted to work with them.
Jake Reber: Brian asked me to schedule a show at The Destination. So I put it together and it was awful and literally no one came, but Brian loved it, it was like we were all just to do a private show for him.
Craig Williams: Yes, Brian delights in other people’s suffering.
Kent Carney: Brian and [store co-owner] Evan Pack are so supportive of the local comedy scene, and their store is so legitimately rad, we’re thrilled to do whatever we can to support them, as well.

LEO: To the actors, obviously Craig writes a script, but is there any improvisation?
JR: Oh yeah … I don’t do anything they write.
April Singer: I do exactly what’s on the page, and if I want to change something I always clear it with them.
Sean Keller: I give it the Edward Norton treatment; I re-write what they wrote and then very loyally do what I wrote. I’m pretty strict about it.

LEO: How long will the first season be?
MG: Seven episodes. Right now we have no budget and this is a labor of love for all of us, so we just shoot when we can, but hopefully by the time we get through season one people will see what we can do and love it as much as we do, and then we might try and crowd fund season two.

LEO: Jake’s acid tongue pseudo-coworker is clearly a standout character in the first two episodes. Where did he come from?
JR: I just kept showing up hungover because I was drinking a lot at the time. My girlfriend was pissed and would be like: “Where are you going every morning? You’re like still drunk.”
KC: Yeah, that’s how they shot “Patton” with George C. Scott.
JR: And Kent did feed me a lot of lines in the pilot because I was so hungover. You all kept filming and were saying, “Just be funny.” I was like I don’t know … Nightcrawler smells like egg farts.
CW: Sometimes I will literally just write, “Improvise by Jake or Kent.”
KC: We do improvise a lot, but Craig’s ability to write in Jake’s voice astounds me. After knowing Jake for a while I’ll read it and be like, that is definitely a Jake-thing-to-say.

LEO: What’s the end game for the show? Network, cable, stay on the Internet?
MG: My favorite compliment we’ve received so far has been, “Your show isn’t good enough for TV, but it’s good enough for Netflix.”

LEO: Have you seen “Daredevil?” Netflix is killing it. I would say your show’s good enough for TV, but not good enough for Netflix.
JR: Did we just get compared to “Daredevil”?
KC: Our new tag: “‘Bagged and Bored’ … it’s basically ‘Daredevil.’” •