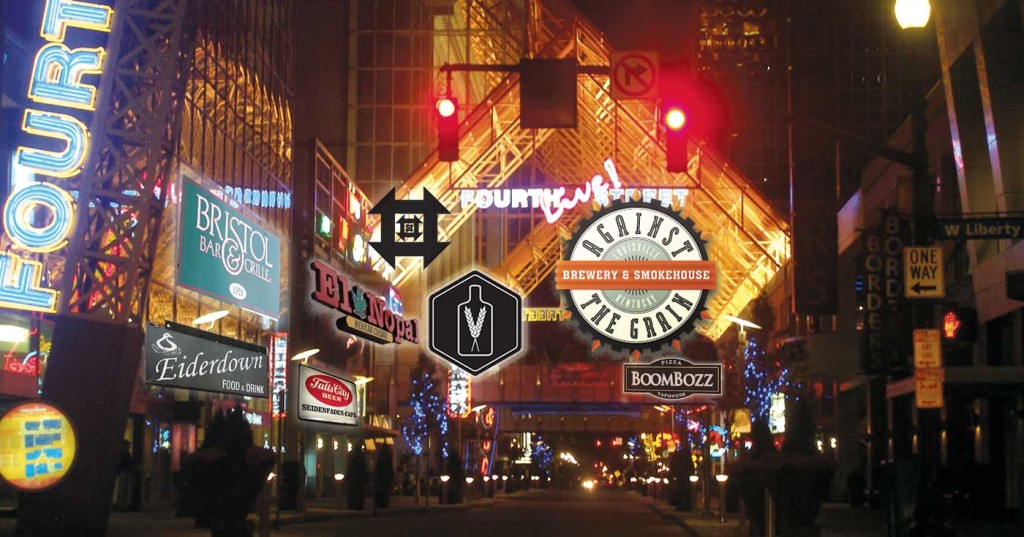 4th Street Live goes local
4th Street Live is apparently tired of being the drunk, handsy uncle that no one invites over for the holidays; the gaudy smear of neon shame that permeates all of downtown with its stink … is going local!

“We’re tired of being on the outside looking in of the burgeoning culinary scene that Louisville is quickly becoming known for.” Says Bryan Merell, an executive at 4th Street Live’s parent-company Cordish Companies tells The LEO. “Going forward, we will make it difficult for the corporate business model to work on 4th Street in hopes of allowing local business models to flourish.”
Cordish promises to lower rent and drink prices in hopes of attracting locally-owned restaurants and breweries, while driving their current clientele out.

Cordish will not be renewing the leases of any corporate owned and operated restaurants, bars or nightclubs that currently reside in the complex, including their own properties like Tengo Sed Cantina and Sports & Social Club. As it stands, it appears Maker’s Mark Lounge will be the only current tenant allowed to remain in operation.

“Yes, Maker’s will stay,” Merell assures us. “With such a healthy bourbon culture in Kentucky, we’re hoping Maker’s Mark Lounge will anchor this new Louisville-centric direction we’re moving toward. In fact, we love Louisville so much, we’re rebranding all of our other Cordish developments from Maryland to California – as “Lil’ Lou.” Each one will be filled with nothing but Louisville owned businesses; we’ll have that unique Louisville Local concept duplicated from coast to coast.”

Since the announcement, rumors have been swirling as to which local restaurateurs will move into the plethora of space 4th Street has to fill. The owners of local Mexican restaurant chain El Nopal were one of the first companies in early negotiations with Cordish. •

PBR shortage closes several Highlands and Germantown bars
Several Highlands and Germantown establishments had to close their doors the night of March 23 after two cargo trucks making their usual Monday afternoon Pabst Blue Ribbon delivery failed to arrive. According to Chucky Greene, driver of the one of the missing trucks, they were heading southbound on Bardstown Road near Mid City Mall, when he saw a stalled motorist ahead of him.
The driver of the stalled vehicle was UofL student Katie Jones, who was in her 2009 Kia when it ran out of fuel on her way to fill-up. “I don’t know what happened, it just stopped,” Jones recalls.

“I swerved to miss the girl and the truck behind me followed,” Greene tells us. Both trucks tipped with the sudden maneuver and toppled over, flooding the block with PBR. Thankfully, there were no injuries. However, emergency crews did examine the drivers and six bearded gentlemen in tight jeans that were found licking the sidewalk when officers responded.

LEO also spoke with an employee of Nachbar, one of the bars affected by the accident, and he wanted to remind readers that Nachbar closed down first … before anyone else even heard about it. •

“Straight bourbon burned too hot,” Jones tells LEO. “We tried diluting it with Coke but all of the sugar gunked up the engine. Diet Coke proved to be the perfect mixer. It keeps the ethanol from burning too hot with no sugary residue left behind.” The catch is that she hasn’t yet figured out the precise fuel mixture to power the engine, but the cocktails at The Back Door have proven to work every single time.

Katie got the idea when a friend obviously unfamiliar with The Back Door’s notoriously hefty pours, took one sip of his cocktail and asked, “What is this? Jet fuel?”

“I didn’t have a jet to experiment on,” Katie says, so she converted her 2009 Kia Soul to run off bourbon and diet. “It was really just a matter of designing some new filters, adjusting the fuel injector, juicing up the spark plug, and a few other small modifications … that was it.”

So far Katie has driven her bourbon-powered car from Louisville to Frankfort and back, burning only two-and-a-half cocktails round trip. •

Thrillist publishes another mindless list about local food and/or drink
Thrillist.com’s latest list of top dishes or drinks or restaurants or whatever came out this week. It was all about the top 10 or the top 20 or some shit, we forget. Anyway, it had to do with drinks. Maybe bourbon cocktails or mint juleps. Or local craft beer? Whatever.

But it was talking about all these Louisville bars around town and where to get these things, and as people half-heartedly read the damn list on their phones while they were stuck in downtown traffic or whatever started wondering if the writer had even bothered to actually try the shit he or she was writing about. Because the story just seemed so freaking generic and pandering, you know?

Because if you think about it, every one of those damn lists is sort of the same. But people click on lists, because everyone just caaan’t be bothered to think on their own. God forbid we do the actual conceptualization of personal preference ourselves. No, all the analysis has to be done in advance and wrapped up in a tidy bow because — oh shit, traffic’s moving  again. Never mind. •