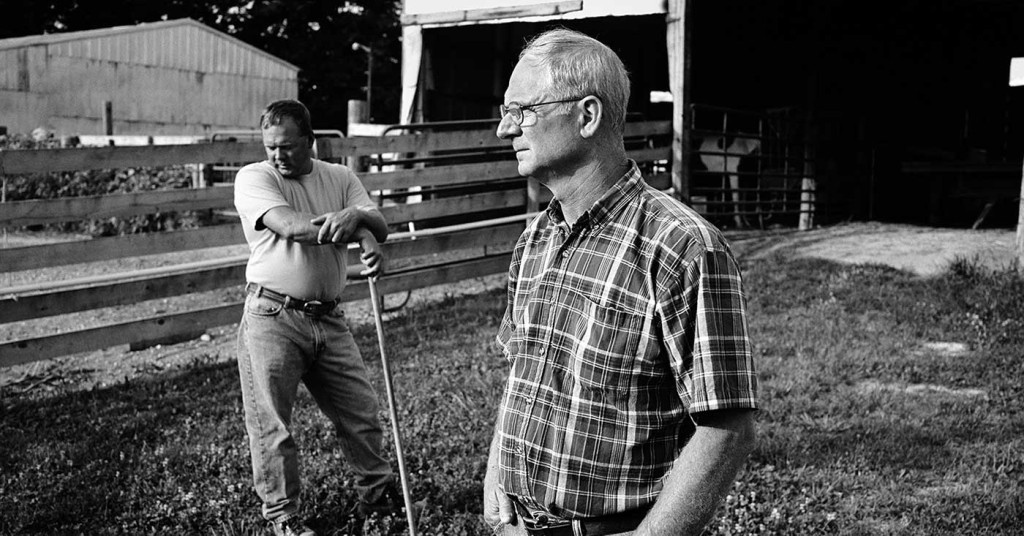 If it is true that home is where the heart is, then Robb Hill’s heart is in the land that surrounds Utica, Indiana. The documentary photographer, who has lived in the big cities of Chicago, Washington, D.C. and now Atlanta, is concerned by the changes currently happening to his rural childhood playground.

“Nine years ago I started photographing the area in Indiana that is now being directly affected by the East End Bridge, a project I’ve titled ‘HomeLands,’” he says. “I grew up in Utica and wanted to photograph the change that was and is taking place.”

When asked about his personal “homelands,” he remembers, “We moved to Utica … in 1975. I was six. I left Utica in 1987 to go to [Indiana University] but had a few extended returns over the years. It is the same place that is now Hidden Hill Nursery [and Sculpture Garden, owned by his parents]. It was nothing like it is now. We built the barn and raised animals for a while.”

Hill’s collection of untitled black and white photographs from this small town area is currently on display at UofL’s Photographic Archives Gallery. These images are stark, panoramic and unflinching. When people discuss their personal history or where their ancestors came from, they are talking about their roots. Hill has created images that not only record a place and time but also plainly reveal the uprooted and ungrounded, be it abandoned built structures, people or leveled land.

He could have easily subtitled this show “Broken.”

“I believe land makes people who they are. … But what happens when change comes from the outside?” he eloquently writes in the wall text accompanying the exhibition. “The construction of the East End Bridge and the extension of I-265 will change this area dramatically. The woods, pastures and limestone cliffs are being converted to concrete, steel and asphalt. I don’t think anymore about the farmland and woods being lost — I think about how it feels to see your home slowly vanish around you.”

Hill has a poet’s eye for the land. Some of the 40 images in the exhibition are stand-alone photographs, such as a lone white horse in a fog-laden pasture or a field enclosed, as well as highlighted, by a black fence. Others, like the composition of two farmers seemingly lost in thought, ties in with scenes of earth-hauling trucks and flattened landscapes. This pictorial metaphor for loss is continued with fallen mailboxes, old cemeteries and abandoned boats, tree limbs growing to ensnare them.

The tale is written photograph by photograph and, for the most part, it isn’t a pretty picture.

Yet many will rejoice when the bridge is finally finished and the gaping circle that is I-265 will be more than an exit ramp. Hill is here to remind us of just what we lost to make that gain under the banner of progress. •