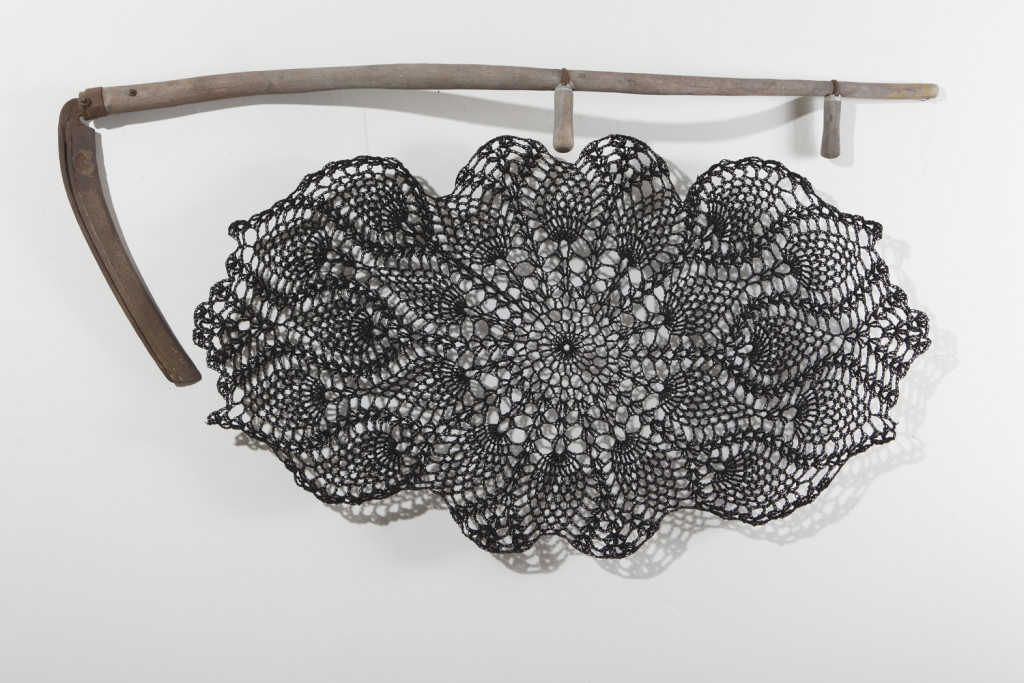 Bette Levy wears many hats in our artistic community. Best known as a textile and fiber artist, she’s also is a co-founder of the art organization LAFTA (Louisville Area Fiber and Textile Artists) and the director of the Patio Gallery at the Jewish Community Center.

LEO: What type of textile artist are you?

Bette Levy: I practice what I like to call “fine art embroidery.” Primarily a hand stitcher, I use vividly colored silk buttonhole thread on black raw silk grounds. This approach intensifies thread colors and sets up strongly contrasting figure-ground relationships in which the black background forms a significant portion of the work. My subject matter is based on my photographic studies of nature and is small scale and abstract.

LEO: When did you start doing needlework?

BL: I’ve always been a maker and learned all of the needle arts at a very early age. My great-grandmother started a beaded handbag company … my grandmother was the creative designer … [and] my mother was a painter, sculptor and costume designer. So I grew up surrounded by creative women who worked with their hands and often with textiles.

LEO: You have included things like tools in your textiles. What is the most unusual item you have used to convey an idea?

BL: Because [embroidery] … is so labor-intensive and involves such concentrated small motor movements, I tend to alternate this work with other freer and larger scale techniques. These include crochet on rusted tools and other metal objects, as well as machine embroidered quilts in both textiles and paper. I’ve also gone further afield by working with pig gut, walnut ink, shibori, rust stain, burning and discharge. I don’t see any of the objects or mediums that I work with as unusual. Rather, I see their shapes, colors, sizes and textures and how they would lend themselves to what I want to produce or how they would juxtapose with whatever else I am using.

BL: I am primarily working with pig gut in both two- and three-dimensional forms. These pieces are largely inspired by unicellular life forms and will be on view in my November show with Kay Grubola at PYRO Gallery.

LEO: Has being an art therapist influenced your art?

BL: I think that virtually everything I’ve done in my life has influenced my art — I firmly believe that all knowledge and skills are accumulative. With an undergraduate degree in experimental psychology and an early career in the field of market research, I came to Louisville in 1974 and received a master’s degree in art therapy at UofL. In 1994, I entered the UofL fiber arts program, graduating with my second master’s degree in 1998. My technique of stitching on black backgrounds is derived from an art therapy technique. Often, when a person is psychologically blocked, an art therapist may ask a client to draw on black paper. Because the rules are different using black paper … sometimes a person can break through their psychological blocks. Because I had experimented with black paper, I tried using black fabric and found it to be an effective and dramatic approach.

LEO: You are a founding member of LAFTA. Why did you feel the organization was needed?

BL: Being an artist can be a very isolating and lonely existence. It is important to have contact not only with other artists, but also with other artists who are working in the same field. LAFTA was founded as an opportunity for practicing textile artists to network with one another … to collaborate with existing organizations and galleries, and finally to educate the community about the field of textile art.