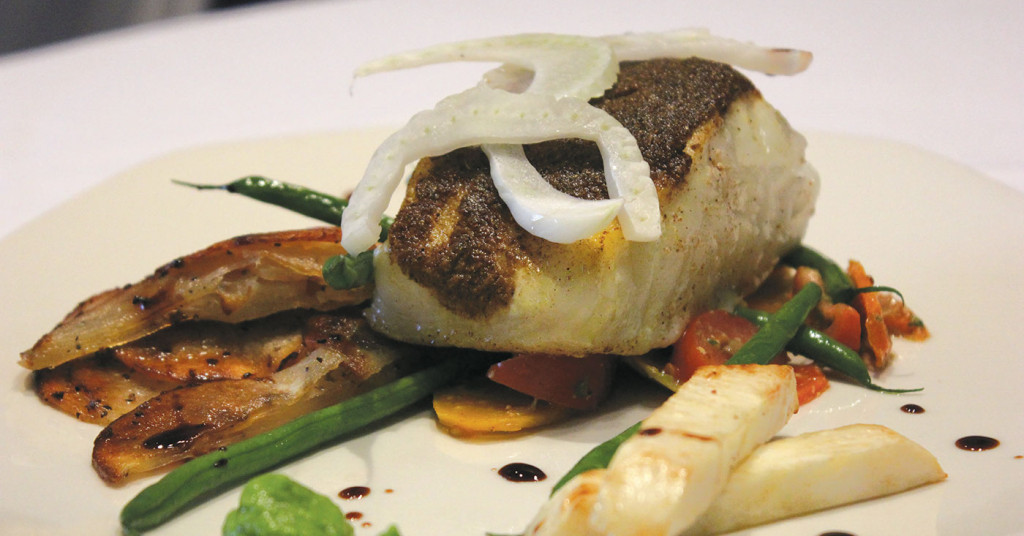 Winston’s Restaurant and Chef John Castro kicked off 2015 by revamping the award-winning restaurant’s menu. It rolled out some dishes of note in a sneak peek luncheon last week that included the return of an old favorite and a delicious but messy foray into bone marrow.

Castro presented 11 samples, ranging from a “Not Brown” to a decadent Nutella Raspberry French Toast, with some intriguing and tasty stops in between.

One notable dish is the restaurant’s signature Sea Bass ($36), served with curry and fennel yuzu, matcha, jalapeno oil, roasted heirloom carrots and celeriac and potato galette. Castro told the gathered media he removed the dish from the menu a few years ago because “curiously” it sold too well. It sold well to the point that people would sit down and order it before even looking at the menu.

But a few bites of the spice-crusted, buttery fish was proof why it sold so well. For those who’ve been missing it, the fish makes a triumphant return.

Another hit, this one from the small plates portion of the menu, was Poached Egg with Pea Puree Toast and Bone Luge with Sherry Broth Back ($14). The delicious ox tail marrow was just the beginning; the finish to this delicious treat was to “shoot” the sherry broth through the ox bone. Messy, delicious and, frankly, a lot of fun.

“It’s one of my favorite things, ever,” Castro said.

Another hit was what Castro nicknamed his “Tower of Power,” a BBQ Pork Stack ($12) stacked three-high with hoe cakes and topped with dill pickles and spicy onion slaw. There was also his signature “Not Brown,” a tasty version of a Kentucky favorite made with fried green tomatoes instead of bread, and seafood instead of turkey.

He made no bones about the fact that, being a Kentucky restaurant, he had no shortage of requests for a hot brown. But, he said, he preferred to send those folks to the Brown; the “Not Brown” was what he termed a “velvet hammer” to his brother Joe, who is well known for his version of the dish. (Castro admits his family is cooking competitive.)

One of my favorites was a dish called “Mojo Risin” ($39), which is seafood such as shrimp, scallop, shellfish and lobster steamed in a cilantro lobster broth in a plastic blossom that one colleague noted looked like an appropriate water splash. The dish was refreshing and light, or as Castro called it, a “super clean food.”

Other highlights include an oyster pancit, roasted chicken Caesar salad, three-meat meatballs, pan-roasted quail and one of the most delicious lamb chops on the planet, prepared not with traditional mint sauce but with spicy baharat, a traditional Middle Eastern accompaniment for lamb, and served with vegetable couscous.

The menu consistently reaches out for flavors from around the world, with special nods to New Orleans and Latin America. Not a bad place for culinary students at Sullivan University to polish their craft.

“Cooking is not just putting together ingredients,” Castro said in a press release about the new menu. “It’s a visceral experience leaving you eagerly awaiting the next order, the sign of guest satisfaction.”