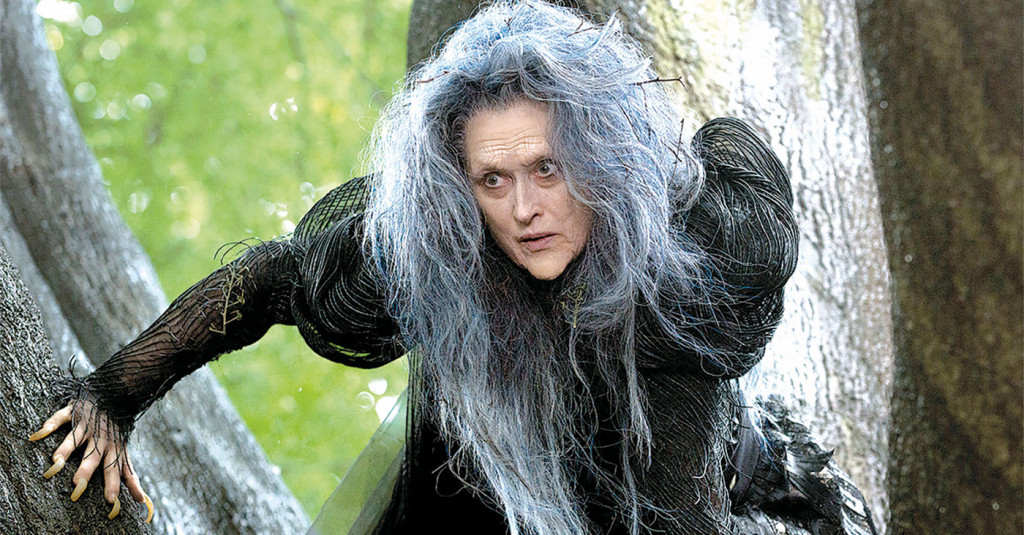 INTO THE WOODS
2014; $22.98; PG
Right up front: We aren’t slobbering fans of this musical. It’s entertaining; we just don’t think that its Stephen Sondheim’s best work, with too many songs that simply don’t stand on their own. That said, Anna Kendrick makes a wonderful Cinderella and James Corden is infinitely likeable as the Baker, while Meryl Streep walks off with the film with her surprising physicality and even more surprising singing voice. The real star of the film, though, is the clever plot which weaves Grimm’s best fairy tales into a surprisingly magical journey, all taking place in a perfectly-realized primordial forest that’s more alive than the pitiful humans within.

THE HOBBIT: THE BATTLE OF THE FIVE ARMIES
2014; $17.98; PG-13
We could argue that this movie series has been less “The Hobbit” and more “Peter Jackson’s Lord Of The Rings Prequel,” but we won’t quibble at the entertainment value contained within. The actual battle, which takes all of a dozen or so book pages, here spreads its bloody malevolence across a full 2½ hours — which includes that breathtaking opening sequence where the great dragon Smaug meets his fiery demise. Any more of a review should be unnecessary as we don’t know a soul who hasn’t seen it at least once; most everyone has had it on pre-order for months. Also available: “The Hobbit: The Motion Picture Trilogy,” a simple repackaging of all three films for $38.99-95.99. Extended versions are expected in November. (Ho, ho, ho!)

A MUSICARES TRIBUTE TO PAUL MCCARTNEY
2012; $14.98-21.98; UR
Our favorite of all the recent wave of tributes to the greatest songwriter-performer of the 20th century. Sir Paul sounds strong and fresh in this 2012 gala showcasing 15 works performed alone or with an energized collection of pop music’s finest. Alicia Keys, Alison Krauss, the phenomenal Duane Eddy, Norah Jones, Neil Young, Sergio Mendes, Coldplay, Diana Krall, James Taylor, Dave Grohl and Joe Walsh — many of them recipients of their own Musicares Tributes — are clearly having a ball. You’ll watch it over and over.

BUKOW AND KÖNIG: SET 1
2010; $27.98-39.98; UR
Never heard of this? Well, the series is now in its 44th frickin’ year! It originally began back in 1971, and after its namesake actors died back in the ’90s, fans refused to give up their brilliantly-written international hit, so the producers kept it going. This generation finds Anneke Kim Sarnau and Charly Hübner as classic mismatched police detectives who have a reputation for doing whatever is necessary — legal or not — to bring baddies to justice. Arguably the progenitor of all modern American cop shows, and certainly one of the most entertaining and thought-provoking we have ever seen; five 90-minute episodes on 3 discs. Also available: Set 2 with 4 more episodes. We are hooked.

MYSTERY SCIENCE THEATER 3000: VOLUME XXXII
2011; $36.99; UR
This MSTie offering is unique: four episodes never before seen on home video, plus a smattering of all-new bonus goodies. And what marvelously obscure films! We start with “Mighty Jack” (1968) and “Time of the Apes” (1987), a pair of former no-budget Japanese kids-TV shows, pared down and reformatted for the US. “Jack” features a super-spy team headquartered in a flying submarine — do we really need to go on? Also includes the exceptionally bad “Radar Secret Service” (1950) and completely execrable “San Francisco International Airport”, which we suspect is actually a failed 1970 TV pilot. Wonderfully dreadful stuff plus some collectable bonus goodies — we are in heaven!

THE SURE THING
1985; $17.86; PG-13
John Cusak’s first starring gig, just one year after his walk-on in “Sixteen Candles,” is the comedic tale of a college student (Cusak) who learns of a beautiful, promiscuous young woman (heart-stopping Nicollette Sheridan) who is a Guaranteed Lay (cue heavenly choir). This sets in motion a fractured road trip, unexpectedly accompanied by annoying classmate Daphne Zuniga. They, of course, become attracted to each other over the course of the drive, but that obvious plot belies just how good this perfect ’80s flick can be. Directed by Rob Reiner; now available for the first time on Blu-Ray.

UNBROKEN
2014; $22.98; PG-13
The absolutely true, impossible life story of Louis Zamperini, the bullied son of immigrants who became a celebrated Olympic hero, only to endure seven weeks in a life raft after having his plane shot out from under him in WWII — and was then captured by the Japanese and sent to certain death in a POW camp! And yet he survived, thanks to a combination of will, street-smarts and exceptional bravery. Here, director/producer Angelina Jolie puts Jack “Skins” O’Connell through his paces as Zamperini, with a flawless script by Joel and Ethan Coen.

The once-controversial practice of “doping” – a physical boost from drugs and/or extra doses of the riders’ own blood – has transformed the sport of pro cycling into a competition of supercharged human machines. This intimate doc from the Netherlands follows the only major team which openly competes without doping, taking us into their workouts, their kitchens and even their bedrooms as they attempt to turn the tide and prove that such technology demeans us all. Two of their number, Marcel Kittel and John Degenkolb, have successfully defeated many of the robotic meat-sacks who rule the sport.

This wildly addictive anime series has the most rabid fan base imaginable, including a faction which generates their own stories, mangas and even animated features. William Twining, a young genius inventor in 19th century England, accidentally summons a demon from Hell in his basement – who tells him that he is a descendant of King Solomon! And he has the power to select the interim Hell Emperor while Lucifer takes some time off! Of course, the boy doesn’t believe a word of it, so the demon and his co-workers disguise themselves as schoolkids and become his classmates. Simply amazing in every way; an instant favorite, highly recommended.

Another terrific anime series, this began as a series of handheld video games before morphing into both broadcast and straight-to-video TV, and even a live stage play. A highschool girl moves to a new town when her priest-father is transferred. There she discovers six brothers – all handsome but dark and dangerous – who turn out to be vampires! Over time she discovers that the whole area is populated by vampires, as the brothers – some of which, she learns from her missing father’s diary, may be her own brothers – drink her blood! A wild mixture of melodrama, dark romance, mysticism and innocence, all presented in evocative artwork. Nicely twisted

This comedy/drama/mystery series from Italy is incredibly popular, thanks in large part to its star: grindhouse stalwart Terence Hill, most famous in America for his Trinity movies of the 70s and 80, and for starring in 1968’s “Django, Prepare a Coffin.” Here he is the titular average, everyday, crime-solving Catholic priest. No gunplay, few chases (always on foot), and zero violence. So why are they so good? Easy: They are brilliantly written, flawlessly directed, and filled with enough wonder, wisdom, warmth, humor, hope and nonsense to dazzle even this pair of jaded American viewers. Incredibly addictive; set 10 also available.

The study of the sacred Kabbalah was once reserved only for the most highly experienced and mature scholars of the Talmud. The average Jew knew only that the book existed and that it was a dangerous tome full of arcane wisdom – and reportedly magic words – that the average person had no business messing with. But in true 21st Century style it has become the hot, new religion for the social elite, its once-secret esoterica now published on the Web for all the world to see. This doc takes a more personal look at integrating the past and present as director Steven Bram reconnects with his once-isolated Hasidic relatives, making a pilgrimage to Israel to integrate the Kabbalah’s teachings into his own life.

Rowan Atkinson has been setting the standard for British humor since the late 70s when he was often the comic foil for Peter “Bedazzled” Cook in such groundbreaking work as “Not the Nine O’Clock News.” But most Americans know him only as Mr. Bean, that pantomime of all that is silly and awkward in the world. A gleeful (and occasionally nasty) Everyman, Bean delights in causing all manner of havoc– which usually turns around and bites him in the bum. Contains 14 too-short episodes from his 1990 TV series, including the classic bit where he attempts to modestly put on his swim trunks at the beach. Priceless.

Another terrific crime-thriller from Sweden, aka, “Den fördömde” (“The Cursed One”), this follows rugged Rolf Lassgård as the titular police profiler whose personal life is an unmitigated shambles. For starters, he’s a sex addict who blames himself for the death of his wife and daughter during the 2004 Thailand tsunami. To make matters worse, his new partner, Vanya (Moa Silén), turns out to be the illegitimate daughter he never knew he had! Frankly, the guy is a basket case, but it drives him relentlessly to hunt down the monsters who prey on the innocent. An excellent, highly underrated series in Finnish with subtitles.

The Japanese word “otaku” refers to pop culture and all its obsessed fans. Once a pejorative, it became a badge of honor among devotees of anime, manga comics, and toys back in the days of Mobile Suit Gundam, and there are now entire shopping malls dedicated to its devotees. This anime series, set in Private High School Hekiyou Academy, takes otaku to a new level: the central character, Ken Sugisaki, the only boy on the student council, writes wild, fictional stories about the female members of the council to garner support from the student population. Filled with big-eyed (and often big-breasted) moppets in sexy school uniforms, this thing is wildly addictive, careening between reality and fantasy until you’re never sure if you are watching one of Ken’s stories or “reality” (whatever that is).