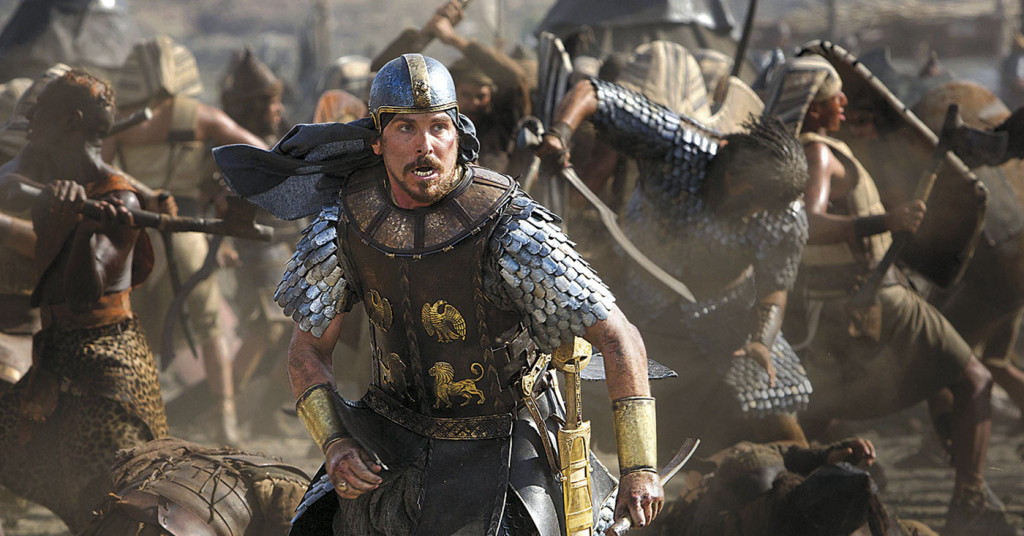 ANNIE
2014; $17.98-38.98; PG
When we first met Quvenzhané Wallis, she was just a tiny, amazing force of nature, perfectly at home with the “Beasts of the Southern Wild.” Here she moves to the jungles of NYC as the titular unstoppable foster child in this popular Broadway favorite. Her Daddy Warbucks is smarmy politician Jamie Foxx, and while neither is a renowned singer or dancer, they carry the story forward with pure charisma, giving Cameron Diaz’s orphanage-hag Hannigan most of the best lines. Won’t change your hard-knock life, but a pleasant couple of hours nonetheless.

EXODUS: GODS & KINGS
2014; $17.98-49.98; PG-13
Ridley “Alien” Scott pulls out all the stops for his flawed telling of the Biblical tale of Moses, Pharaoh Ramses and all that plagues-of-Egypt nonsense. Those looking for historical accuracy won’t find it here — or, it should be said, in any Hollywood Biblical offering going back to C.B. DeMIlle — and a lot has been made of the fact that there are almost no black actors in the cast, which includes Christian Bale as Moses and Joel Edgerton as the Pharaoh. It’s just spectacle, plain and simple, from the 3D vistas to the overblown CGI plagues, to the tankers of crimson blood ruptured ’cross the hot desert sand. Meh.

AGUIRRE, THE WRATH OF GOD
1972; $17.98-24.98; UR
This is the movie that cemented Klaus Kinski’s status as the single most insane actor who ever lived. He plays Don Lope de Aguirre, a conquistador under Pizarro during his ill-fated 16th century search for El Dorado, the non-existent Peruvian City of Gold. After years of starvation, death and isolation, Aguirre goes nuts and sets off on his own bid for immortality, determined to conquer and rule all of South America. It doesn’t go well, but under the equally-demented hand of writer/director Werner Herzog — in his first pairing with Kinski — a high-water mark in cinematic, bat-crap-crazy was established that may live forever. Finally available on Blu-Ray.

HALO: NIGHTFALL
2014; $13.98-24.98; UR
Similar in plot and tone to “Pitch Black,” this serves as an introduction to “Halo 5”s immortal Jameson Locke. When a dastardly new bioweapon spreads a disease only fatal to humans, the ONI scrambles a suicide squad to find and destroy the central ingredient. It goes without saying that the animation is flawless, especially the wriggling eel-like space-worms. Ick. All five episodes from the web series.

MY GIRL
1991; $14.98-19.98; PG-13
“I’ve got sushiiiine on a cloudy daaaaay…” Man, we love that song! This movie isn’t quite THAT good, but it has its moments as little Macaulay “Home Alone” Culkin clumsily gushes after Anna “Veep” Chlumsky while her single-parent mortician father, Dan Aykroyd, tries to strike a spark with feisty, hot morgue beautician Jamie Lee Curtis. The girl doesn’t think much of that arrangement and will do anything to split them up, dragging the besotted boy along for the ride. One of the ’90s most popular family films, now available on Blu-Ray with some fun bonus goodies.

THE PET
2006; $21.98; UR
Supposedly inspired by actual offers on eBay, a vulnerable young woman (Andrea Edmondson in her only acting role) takes a job as a rich man’s pet — sleeping naked in a cage, going for collared “walkies” — in hopes of financially turning her life around. She is treated kindly until “pet-napped” by baddies who brand her tush for sale on the Global Slave Market. Is this Special Director’s Cut simply exploitation, or are the filmmakers saying something important? You decide.

TOP FIVE
2014; $17.98-39.98; R
Fans of writer/director/star Chris Rock are hailing this as the Return of the Chosen One. Others may find it a bit long and more than a little disjointed, but it definitely shows that Rock may yet find his place in the 21st century. He’s an obnoxious pud about to be married to reality-star Rosario Dawson, who convinces him to have the wedding televised — which is always a terrific idea, right? Friends and family, including J.B. Smoove, Gabrielle Union and Cedric the Entertainer, all add their two cents, but this is Rock’s baby from Scene One to roll-credits.

TROOP BEVERLY HILLS
1989; $14.98-19.98; PG
Fort Wayne, Indiana, native Shelley Long is best known as waitress Diane on “Cheers” — arguably the greatest show ever broadcast — but this flick, made at the height of that show’s popularity, was her most successful movie. She’s the bored mansion-bound soon-to-be-ex-wife of Craig T. Nelson, who becomes den-mother to her daughter’s Girl Scout-like “troop,” taking them on field trips to luxury hotels and awarding merit badges in shopping. Betty Thomas (Sgt. Lucy Bates of “Hill Street Blues”) plays her nemesis. Much better than people give it credit for, and now available on Blu-Ray with fun new bonus goodies.

A CRY FROM WITHIN
2014; $21.98; UR
You can tell right away that this is a no-budget piece of, er, “cinema” from the boxcover: Eric Roberts’ name appears first. And yes, it is another rework of the “successful family moves to the sticks after a tragedy” drama/thriller, but there’s a lot to like here, especially little Journey Gonzalez as “Sebastien” (the original title of this turkey … we think). Other lights include Cathy “Raging Bull” Moriarty, buxom redhead Deborah Twiss from “Kick-Ass”, soaper Tom Pelphrey, and James “The Following” McCaffrey as the requisite priest – plus a cameo by Robert “Man From Uncle” Vaughn.

GOMER PYLE U.S.M.C.: THE COMPLETE SERIES
1964; $52.98-59.98; UR
A welcome e-release of the classic “Andy Griffith Show” spinoff, inspired by “No Time for Sergeants” – the play that make Andy Griffith a star. Gomer, of course, is the over-friendly, talkative, naive country bumpkin (Jim Nabors) whose wide-eyed innocence constantly frustrates his superior, played with screaming zeal by Frank Sutton All 150 episodes on 24 discs; over 63 hours of classic TV. Turn your couch into a foxhole and wait out this damned Winter with Gomer and friends.

WKRP IN CINCINNATI: SEASON 1
1978; $15.98-24.98; UR
We absolutely loved every goofy moment of this old workplace sitcom inspired by the movie “FM”, but we particularly liked the first season. The attitude was so sharp it bordered on breathless: an experiment in social engineering where a hip, young generation literally steals the world from the aging, addled Old Guard at a failing AM radio station, energizing it with rock music, sex, drugs and live turkey-bombs. Made stars out of Howard “Doctor Johnny Fever” Hessman and Tim “Venus Flytrap” Reid, and forever burnt the Monroe-like image of Loni Anderson into our brains. Season 2 and Complete Series box sets also available. Man! Do we love this show!