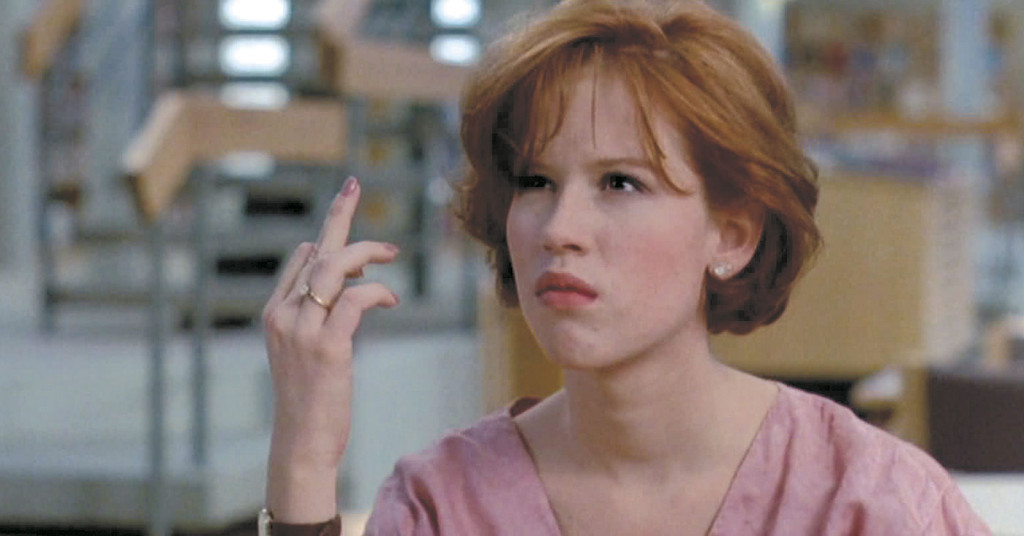 FIREBALL XL5: THE COMPLETE SERIES
1962; $19.98-29.98; UR
Bill here; Dave went completely meshuga when we received this ’60s Gerry Anderson SuperMarionation chestnut, and I haven’t been able to get him to calm down and write a damned thing since. He’s now convinced that he IS Col. Steve Zodiac, marionette commander of a cool-looking spaceship that launches from this big roller-coaster thingie, along with wooden co-pilot Venus and Prof. Matic. Each half-hour B&W adventure takes Zodiac (voiced by Paul “Aliens” Maxwell) and crew to alien worlds throughout Galactic Sector 25. Lots of nifty space adventures, and more fun than you can shake your Zoonie at. Now if I can just get him down off the chandelier …

THE BREAKFAST CLUB
1985; $13.49-19.98; R
The 30th Anniversary release of one of the ’80s best movies. Molly Ringwald, Judd Nelson, Emilio Estevez, Anthony Michael Hall and Ally Sheedy would forever be branded the Brat Pack after spending one dreary Saturday in school detention: a clever mix of social bonding and minor crimes, extolling the virtues of being young, bored and free in America. Written and directed by John Hughes as his followup to “Sixteen Candles,” it defines all that was best about the ’80s. Warm, funny, knowing, scary and sexy — but never less than adorable — this is the movie everyone wants to claim as their own biography. A must-own.

DARK HAUL
2014; $9.98-24.98; UR
From the SyFy Channel’s 2014 Halloween lineup, this flick exists for one and only one reason: to showcase a rampaging winged Whatsit ripping through the walls of its semi-truck prison while barreling down the highway at 90 miles an hour. That scene is AWESOME. The rest of the movie is spent with Tom “The Red Road” Sizemore and Rick “Alien Outpost” Ravanello as they guard “Zib” (smokin’ Evalena Marie), the creature’s half-human half-sister.

PEE-WEE’S PLAYHOUSE: SEASONS 3, 4 & 5
1988; $19.98-29.98; UR
The final three seasons of Paul Reubens’ amazing so-called “kid’s show” that racked up 22 Emmys. This set contains one of our all-time favorite episodes, “Front Page Pee-Wee” (1990), in which our hero decides to publish his own newspaper, only to have Randy replace his important news reports with comic lies! What most people don’t know is that this episode inspired John Yamuth to start publishing LEO! Really! (Or not. Hah hah!) All 23 episodes — Season 3 contained only two, a crime against humanity — on 5 discs. Today’s Secret Word: BUYIT!

QUINCY, M.E.: THE FINAL SEASON
1982; $29.98-39.98; UR
The progenitor of today’s many “CSI” knockoffs, Jack “Odd Couple” Klugman was the titular gruff, ornery L.A. Medical Examiner, who each week got himself into and out of all manner of trouble using his vast knowledge of forensics and a razor-honed wit. By Season 8 the show had become something of a “social cause of the week” showcase, exploring how society was unprepared for the challenges of cutting-edge science, and the lengths that corporations would go to preserve their bottom line. Groundbreaking stuff in its day, finally available whole and complete after decades of editing by rebroadcasters A&E and ME-TV.

THE HUMBLING
2014; $11.98-24.98; R
A wildly imaginative, complex and, frankly, confusing study of the human animal with the Credits Of The Gods. Al Pacino leads the pack as an aging actor suffering from progressive dementia (or maybe he’s just nuts), with indie darling Greta Gerwig as “Pegeen Mike Stapleford,” a sexually confused lesbian. Other lights include Kyra Sedgwick, Dan Hedaya, Dianne Wiest and Charles Grodin, just to name a few — plus it’s all based on a Philip Roth novel with a screenplay by the incredible Buck “Get Smart” Henry, and directed by Barry “Rain Man” Levinson! Could all that talent possibly make a bad movie?

WHITE HAIRED WITCH
2014; $9.98-29.98; UR
Aka “The White Haired Witch of Lunar Kingdom,” this much-underrated Martial Arter features a rare female protagonist: breathtaking Bingbing Fan from “Blink,” “Iron Man 3” and “X Men: Days Of Future Past.” Fed up with the corruption which allows guards to rape and murder at will, she leads her followers in a revolt — only to be falsely accused of murder when the governor is assassinated. With nowhere to run she takes on an empire teetering on the brink of collapse. We liked it.

Some reviewers have compared this Gay Euro love story to Shakespeare. We won’t go that far, but it does have some of the best writing we’ve seen in a while, and the tale of two lovers (in this case a pair of “footballers”) who lose their passions until a third (and a fourth) enters the picture is certainly playing with universal themes. Hungarian bee-keeping, painful beatings, German soccer, human chemistry, great cinematography, unbearable agony, and the universal desire to build a world free from woe clash in one of the earthiest dramas you’ll read this year.

The best thing a movie can do is immerse the viewer in another life, another culture; letting you experience the common joys and fears and pains which make us all human from another point of view. This is just such a movie, set in Norway’s heady deep-sea oil-boom of the late 1970s. Rugged Aksel Hennie (2014’s “Hercules”) is a professional construction diver, risking his life to bring prosperity to his country from deep in an alien landscape as dark and deadly as the surface of the moon. But there are others just as committed to seeing that he fails, even if that means killing him. Based on true events and featuring an international cast including Wes Bentley and Stephen Lang, this thing rawks.

A Gay romcom that borrows heavily from the old Alan Alda/Ellen Burstyn comedy, “Same Time, Next Year” – at least on the surface. Closeted Mark Cirillo throws a Bachelor Party for his straight best friend Scott Sell, after which the two end up having drunken sex. So, of course, they decide to meet again (damned spell-check changed that to “meat again”!) at the same hotel the next year to see what it all means. They end up seeing what it all means annually for the next 12 years.

TO WRITE LOVE ON HER ARMS

The great Kat Dennings — who is wasting her talents in that tedious “Two Broke Girls” sitcom — made this biodrama/performance-piece a few years back, but it’s just now showing up on home video. It’s based on the life of Renee Yohe, a badly drug-addicted woman who repeatedly injured herself during bouts of depression before founding Purpose For The Pain, which provides a stage for her songs and poems aimed at helping other sufferers. Done kinda artsy-fartsy, but worth a look.