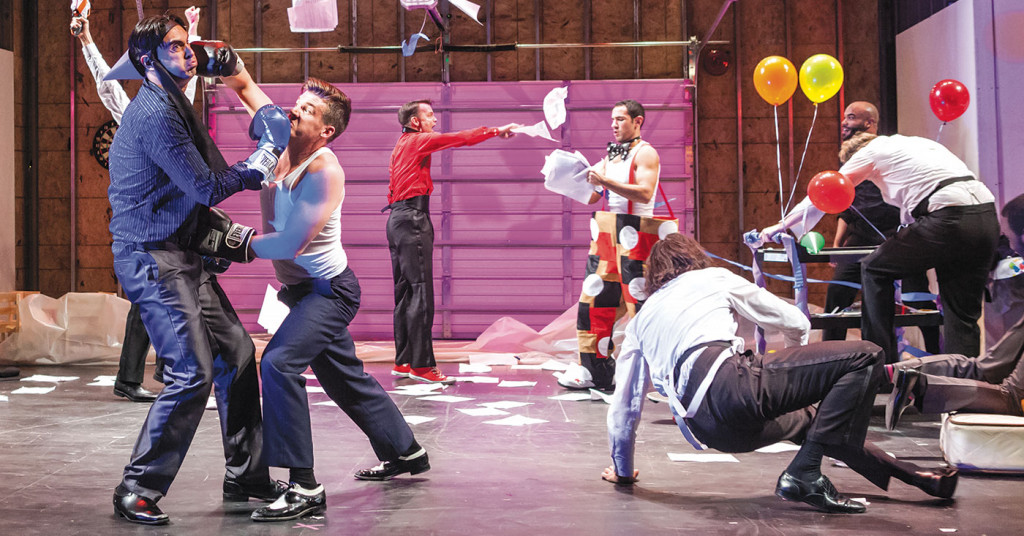 I imagine that decades from now, people who were lucky enough to see it will think back to Charles Mee’s “The Glory of the World” — much as I think back to Susan Kingsley’s 1981 performance of Jane Martin’s “Twirler” — as one of the finest, most startling pieces of theater they’ve ever seen. I imagine someone at a party, talking theater, maybe swirling a glass of wine, cultivating a cryptic smile to reel in an audience, then saying, “The best fight scene I’ve ever seen was in a play about Thomas Merton.”

Oh, there are lots of memorable things about the newest production in this year’s Humana Festival of New American Plays at Actors Theatre of Louisville (“The Glory of the World” is also part of the Brown-Forman Series). Mee’s script bubbles with wit and silliness, biting satire and tender sentiments. And Director Les Waters gives us a series of surreal and darkly beautiful tableaus that sometimes feel like products of a feverish contemplative imagination and other times feel like a pure, unfiltered look into the real world.

One of the things people will remember decades from now is the collective sense of confused delight that most audience members felt upon exiting the theater (I say most, because some folks doubtlessly walked into that theater hoping for something they didn’t get — a somber theatrical meditation on Thomas Merton’s theology and philosophy).

I can’t offer much help in sorting out the “meaning” of the play. But in an essay called “Notes on a Philosophy of Solitude,” the Trappist monk Thomas Merton wrote about the allure of the modern world and the rich distractions it offers people whose strongest desire is never to be alone with themselves. Merton had a prophetic understanding of how social media and culture work to “anaesthetize the individual” and “plunge him in the warm, collective stupor of a collectivity which, like himself, wishes to remain amused.”

He wrote that our collective diversions might lead us in many directions. They might, for instance, “assume a hypocritical air of intense seriousness, as in a mass movement.” Or they might, and more likely would, take on the trappings of the absurd. But one thing, he thought certain: “our absurdity is blended with a certain hard-headed, fully determined seriousness with which we devote ourselves to the acquisition of money, to the satisfaction of our appetite for status and our justification of ourselves as contrasted with the totalitarian iniquity of our opposite number.”

Collective hypocrisies and absurdities abound in the delightful center of this play, but it’s framed by three acts of private contemplation. At the beginning, Les Waters enters the stage and sits at a plain wooden table, facing away from the audience. As he perches in perfect stillness, simple phrases and declarative sentences are projected on the walls above him — the straightforward, non-judgmental reports of an observant mind. Toward the end of the play’s chaotic action, Waters enters at the wings and sits off to the side, again in the same quiet, unmoving posture — as he takes in the world and all its wild, bloody action at the center of the stage. And then, once the battle has ended and the stage emptied, Waters again moves center stage, this time facing the audience. Once again a picture of stillness — except that now his eyes are quietly and calmly surveying us. And once again simple words pop up on the screen — this time offering reflective questions — “What is contemplation, anyway?” “What is seriousness?”

Those three moments are, in some way, the “meaning” of this play. But oh, all that delicious action! The action plays out as a series of birthday party scenarios that begin with a series of elegantly contentious toasts that try to lay claim to Merton by celebrating that he was some single thing: pacifist, Communist, Buddhist, activist, Catholic, Taoist or perhaps a lusty fellow who had a child out of wedlock. The toasts devolve into rumors and innuendo.

Then a series of tableaus follows — all in some way illustrating some aspect of our collective diversions — love, greed, status-seeking — and the hard-headed seriousness of our acquisitive quests. A lovers’ quarrel (David Ryan Smith and Conrad Schott) morphs into a powerful vision of intimacy that finds the men of the cast embracing one another with foreheads bowed. In another scene, as an obviously affluent group (including Aaron Lynn, Andrew Garman) sits bundled in deck chairs earnestly discussing Merton’s thought, one (Bruce McKenzie) casually snaps his fingers to summon a cocktail from the servants in the background.

There are droll body-building, dance and karaoke-like escapades that feature actors including Barney O’Hanlon and Eric Berryman. As McKenzie and Ramiz Monsef offer a splendid jazz duet, someone else leads a chained rhinoceros across the stage, and in the  background another actor plays in a shower. Other scenes find the cast wearing party hats and sitting in elementary school chairs, playing with drone helicopters and all manner of things.Until eventually, and perhaps inevitably, the famous fight (brilliantly choreographed by Ryan Bourque) breaks out and in a scene reminiscent of “Gangs of New York” the men (including the rest of the cast, all of whom deserve mention:  Josh Bonzie, John Ford-Dunker, Jose Leon, Joe Lino, Max Monnig, Collin Morris, Brian Muldoon, Blake Russell, Lorenzo Villanueva) bring all kinds of makeshift weapons (toilet plungers, mixing bowls, chain saws) to the fray in theatrical marvel that owe much to the technical crew: Dane Laffrey, scenic designer; Connie Furr Soloman, costumes; Mark Barton, lighting; Christian Frederickson, sound; Philip Allgeier, Media; Paul Mills Holmes, stage manager; and Mark Walston, properties master.

‘The Glory of the World’