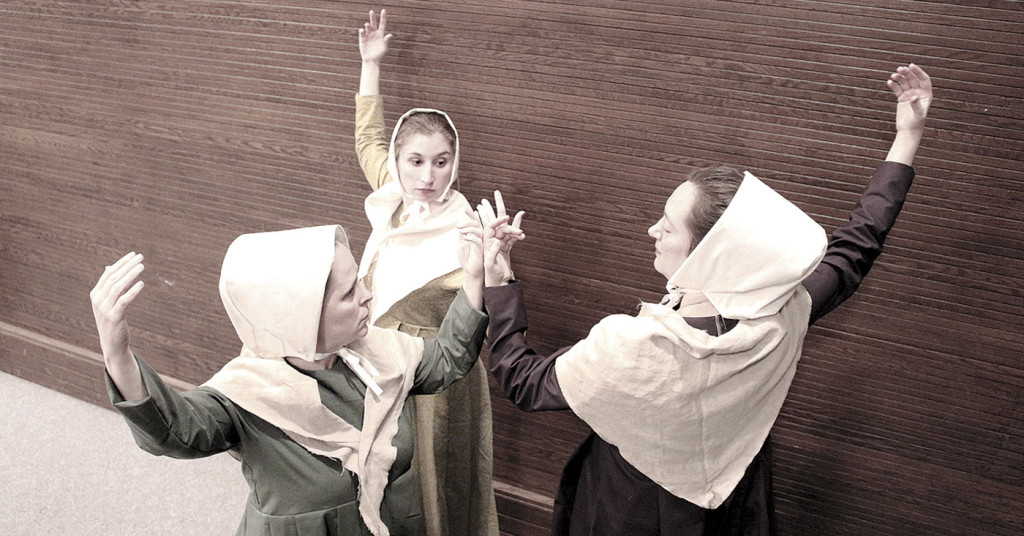 Arlene Hutton’s 2002 play, “As It Is In Heaven,” is set in 1837 in the Shaker Village at Pleasant Hill, Kentucky – and that alone is enough to make it intrinsically fascinating for Louisville theater-goers and students of Kentucky history. The Shaker religious order – its celebratory utopianism, its emphasis on gender equality, its well-known commitment to celibacy and its rich legacy of architecture, crafts and music – is a vivid part of Kentucky’s (and America’s) heritage.

And there’s much to admire about Looking For Lilith Theatre Company’s production, which opened last week at the Black Box Theater in Bellarmine University’s Wyatt Center for the Arts.

First and foremost, there’s the music. Over the course of the play, the nine women in the cast deliver superbly sung, lovingly choreographed performances of more than a dozen Shaker hymns and songs (Donna Phillips, who serves as Music Programs Coordinator at Shaker Village of Pleasant Hill, is cited in the program as a “Shaker Consultant”). Some of the selections are widely familiar – but others will whet the appetites of people interested in exploring this music. There are selections like “Who Will Bow and Bend Like a Willow,” “Oh, Sisters Ain’t You Happy,” “My Carnal Life I Will Lay Down” and of course a lovely version of “’Tis The Gift To Be Simple.”

Likewise, Lindsay Chamberlin’s plain and simple costumes are a colorful delight, as is the very simple set.

The acting here is splendid as well. It’s clear that Director Kathi E.B. Ellis and her cast have plumbed this script and tapped into its humor, its grace and its darkness.

The action of the play focuses on a community of women in the midst of a crisis that’s equal parts generational and spiritual. Eldress Hannah (Karole Spangler) is a stern, righteous figure whose mission is to turn this community around and restore its discipline. And it seems she’d have a pretty clear path were it not for a group of young newcomers whose faith is leavened with giggles, who have a “gift” for lollygagging and who often express a speculative interest in the community’s men (never seen, but much discussed).

The most problematic of these newcomers is Fanny (Kelsey Thompson) who is given to visions of beautiful lights, music and angels. Her visions are contagious, and as others get caught up in them, the behavior of the other newcomers (Jane Embry Watts and April Singer) takes on an ecstatic urgency. This disturbs the older Shaker women, who are skeptical about the reality of the visions. And it raises questions by folks in the surrounding community, including the father of young Izzy, an emotional, vulnerable youngster who was brought to the community as a child but hasn’t yet reached the age when she can become a permanent member.

Our understanding of the women and their various stories and relationships develops over a series of vignettes that show them miming their workaday lives, dancing, singing, worshipping and publicly confessing their sins — sins that early on seem as sweetly innocent as the extra dessert that one young woman confesses to having consumed.

As the scenes play out, we get hints at clashing values. Both Betsy (Trina Fischer) and newcomer Polly (Watts) have a gift for drawing, but for Betsy what matters is to draw what one sees, and it troubles her that Polly, rather than keeping things plain and simple, has a gift for drawing from her imagination.

We see that a spirit of kind compassion is the rule among these women including Phebe (played by Ebony Nolana Jordan, with Brittany Scott as understudy) and Rachel (Shannon Woolley Allison). But as Fanny’s visions accelerate and become more dramatic, skepticism turns into suspicion and fear, until finally Sister Peggy (Jill Marie Schierbaum) speculates that “there’s a poison among us,” and Hannah decides she must take action.

Hannah’s attempt to root out the poison leads to disturbing interrogations that are as chilling as an old-fashioned witch hunt, followed by threats and punishments, and Spangler’s Hannah leads the process — and keeps her occasionally recalcitrant colleagues in line — with an austere and forceful conviction.

A series of shattering moments culminates in the tearful forceful removal of Izzy from the community. And then things come to a head when Hannah — in her certainty that if angels were to visit her community they would, of course, respect the hierarchy and present themselves to her rather than to a young girl — adopts a strategy that is cynical in its inception and tragic in its outcome.

If this summary sounds clear, it’s worth noting that the play itself often isn’t. While the performances are vivid and moving, I wish the script itself were more Shaker-like in its sense of purpose, its form, its craft and its finish. Often the narrative line seemed blurred and the action repetitive, as if the need to wed a vignette to a particular piece of music trumped the line of the story. But that aside, from moment to moment there is charm in abundance in this play … and plenty of gifts.

‘As It Is In Heaven’
Through March 7
Wyatt Center for the Arts
Bellarmine University
2001 Newburg Rd
lookingforlilith.org
$18; 7:30 PM