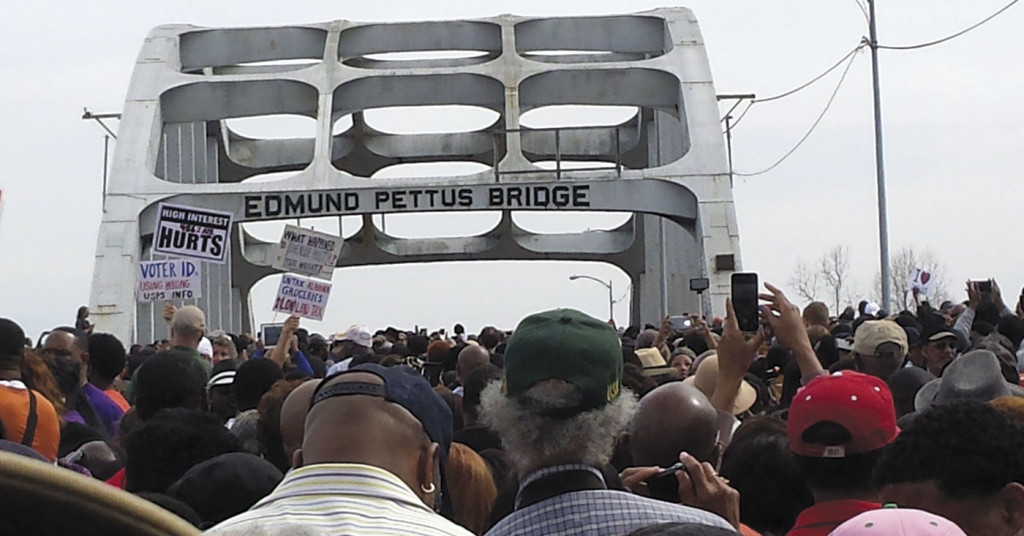 The Edmund Pettus Bridge was built in 1940 to carry U.S. Route 80 across the Alabama River in Selma, Alabama. The span is named for a former Confederate brigadier general, who became a U.S. Senator and Grand Dragon of the Alabama Ku Klux Klan after the Civil War. The Edmund Pettus Bridge is one of the most infamous places in American history because on March 7, 1965, it was the site where Alabama state troopers, armed with billy clubs and tear gas, attacked about 600 peaceful civil rights protesters. That day is remembered as “Bloody Sunday” in the annals of the Civil Rights Movement. It led to the passage of the 1965 Voting Rights Act, which outlawed the discriminatory voting practices adopted in much of the South after the Civil War.

Bill Horton can remember the images of bleeding and choking demonstrators that paraded across the television news in 1965. Horton headed to Alabama with a group of other white Berea College students to be part of a later, successful march to the state capital. He had never been particularly political before this, but Horton said “Bloody Sunday” flipped a switch inside that changed him.
“I have often tried to figure out what clicked in me,” Horton admitted. “It was just at that moment that I knew something important was happening in America and I had to be part of it. We got there in time to walk the last leg into Montgomery.”

After graduating from Berea, Horton attended Yale Divinity School and later did post-graduate work at the University of Louisville, where he studied race and ethnic relations. The 71 year old shared his story this weekend in Selma, where thousands of people from all over the country commemorated the 50th anniversary of “Bloody Sunday.” Festivities were scheduled March 6-9. Although the crowd came together to mark a sad occasion, Horton said the weekend was a joyous occasion that demonstrated the progress America has made.

“I know we still have work to do in this country, but it is amazing to see the interaction between blacks and whites,” Horton explained. “There has been a genuine sense of fellowship all weekend. Another big change is the interaction between blacks and the state troopers. I’ve seen people taking pictures with them and joking around. That is totally different from the first time I was in Alabama.”

The significance of “Bloody Sunday” was especially illustrated on Saturday when Barack Obama, the nation’s first black President, spoke to the crowd. Selma is a town of only 20,000 people, but more than 70,000 showed up for each day of the commemoration. At times, the great mass overwhelmed the city’s infrastructure, but no discomfort could dampen the pride the crowd felt as Obama recognized the debt he owed to the small band of protesters determined to end African-American disenfranchisement. With the Edmund Pettus Bridge as a backdrop, Obama said, “In one afternoon fifty years ago, so much of our turbulent history – the stain of slavery and anguish of civil war; the yoke of segregation and tyranny of Jim Crow; the death of four little girls in Birmingham, and the dream of a Baptist preacher – met on this bridge. It was not a clash of armies, but a clash of wills, a contest to determine the meaning of America.”

Pictures of shooting victims Michael Brown and Trayvon Martin were prevalent in Selma as the event attracted many activists from the #BlackLivesMatter movement. Obama acknowledged the connection between the struggles of the 1960s and contemporary systemic problems. But he remained hopeful for the future of race relations in America. “Just this week, I was asked whether I thought the Department of Justice’s Ferguson report shows that, with respect to race, little has changed in this country,” he said. “I understand the question, for the report’s narrative was woefully familiar. It evoked the kind of abuse and disregard for citizens that spawned the Civil Rights Movement. But I rejected the notion that nothing’s changed. What happened in Ferguson may not be unique, but it’s no longer endemic, or sanctioned by law and custom; and before the Civil Rights Movement, it most surely was.”

Lilly Ware works as a secretary in Atlanta, Georgia. She also volunteers with an organization called the Stop Mass Incarceration Network which addresses the injustice of mass incarceration, police brutality and racially biased policies. Ware, 22, said the 50th anniversary ceremonies in Selma would be meaningless if the current focus on systemic injustice was not part of the conversation.
“We are coming here to remember the lives that were lost 50 years ago,” Ware said. “But we have to recognize that lives are still being lost everyday. We still have to fight.”

Sunday’s festivities in Selma ended with a concert sponsored by the Black Entertainment Network (BET). There were numerous political dignitaries and celebrities on hand for the show. But no one, not even President Obama, garnered as much attention as U.S. Congressman John Lewis, an actual survivor of “Bloody Sunday.” Prior to the concert, the crowd crossed the Edmund Pettus Bridge and sang, “We Shall Overcome.”

“Fifty years ago, when we headed across this bridge we had music in our hearts,” Lewis recalled. “Without the music, the Civil Rights Movement would be like a bird without wings. We learned the songs, and they carried us through.”

Ironically, the concert itself began with a more contemporary number. The Birmingham Trio performed “Glory,” the Academy Award-winning theme of the movie, “Selma.” The crowd sang along with lines like “Every day women and men become legends/Sins that go against our skin become blessings/

The movement is a rhythm to us/Freedom is like religion to us.”

And for at least one weekend the Civil Rights Movement lived on.