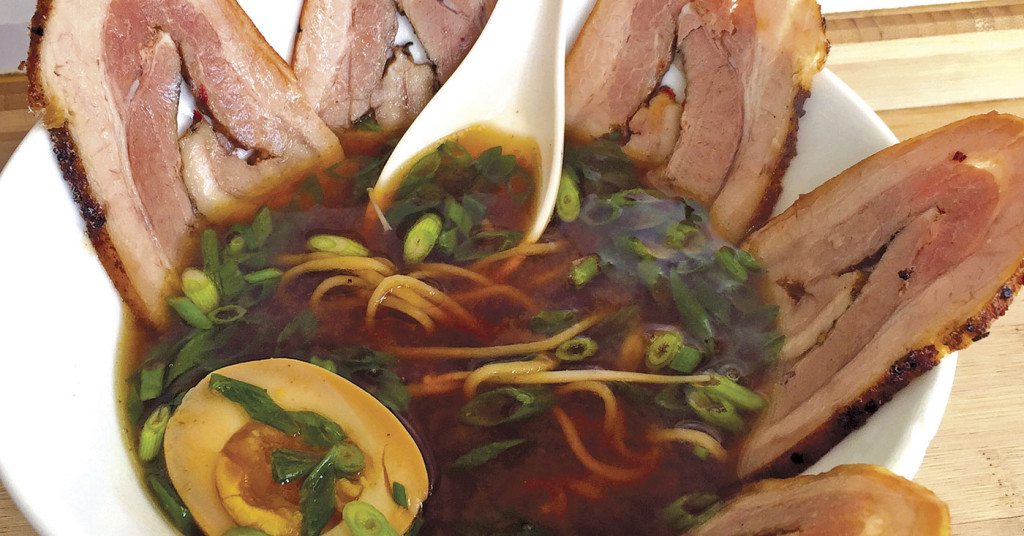 Warmed by the delights of four big bowls of steaming ramen at Rumplings in five day’s time, I asked my baby boomer pals on Facebook a simple question this week: When did you first encounter instant ramen? What did you think of it when you did?

The discussion quickly blew up into a sharp, snarky chorus of generally similar responses: We discovered ramen in college, most of us, and we loved it because it was cheap, quick and tasty with salty, delicious goodness.

Yeah, most of us gave it up later on, stunned in wiser maturity to learn of its horrific nutritional analysis, with half your day’s allocation of fat, a boatload of MSG and all the sodium you need for the entire day, in a single serving. A real serving, that is. The weasels in marketing declare a “serving” to be half of a packet, to which I respond, “Bwahahaha!”

No more ramen for me, I thought, assuming that instant ramen was the ramen.

But no! Real ramen is something else entirely. The original dish, taken from China and perfected in Japan, is the stuff of which cult cuisine is made. Go stream “The Ramen Girl,” if you want to know more. It’s an engaging film about a young American woman who hilariously persuades a traditional, cranky and demanding old ramen chef to teach her the tricks of the trade.

Or, if you can’t watch a foodie movie without getting hungry, simply cut to the chase. Head over, right now, to Rumplings Slurp Shop, where four of the city’s most creative and passionate young chefs have been turning out authentic ramen bowls far into the night since last November, offering the Baxter nightspot strip a worthy alternative to pizza.

These guys — Dustin Staggers, also of Roux and the soon-to-launch Diner America, with his brother Kyle and chefs Griffin Paulin and Ethan Ray — are making ramen that would surely please even The Ramen Girl’s crabby old boss.

With 18 stools, a serving bar and open kitchen tucked into the tiny space that recently housed Baby D’s Bagels, the crew is doing it right, making ramen dough by hand and running it through Kitchenaid pasta makers. They build their goodies on organic, hormone-free and locally grown proteins. And they top off the bowls with artisanal goodies including fiery kimchi made in town by the recently Kickstarter’d Funked & Fermented Kimchi Lab.

The blackboard menu, which will change often, currently contains seven ramen bowls, ranging in price from $5.50 (for “The Rookie,” a simple concoction of noodles and a tea egg in their deeply flavored chicken-pork broth) to $17 (for “The Shorty,” a spicy mix based on braised short ribs).

Want to doctor up your ramen? Red squeeze bottles of Sriracha sauce are readily available. You can also add dumplings ($1.50 each), extra noodles ($4), a tea egg (50 cents) or the kimchi du jour ($1).

This place is so nearly perfect that it feels almost wrong to pick nits, but heck, that’s what critics have to do. So, if I were the mean guy in “The Ramen Girl”, I’d observe that one chicken bowl seemed awfully salty. Also, while carefully handmade noodles beautifully replicate the bouncy, springy style of authentic ramen, like any fresh pasta, the noodles can clump up a bit after sitting in the bottom of a steaming bowl.

But that’s mighty nitpicky for a place that deserves four stars by any standard. I’m going to blow right by those points and give this place two happy thumbs up, and look forward to getting back for more as soon as some of this snow melts.

Consider for example the Piggy ($13), an artistic display of thin-sliced pork belly roulades, succulent and meltingly delicious, arranged around a deep bowl of umami-rich pork broth and half of a “tea egg” that was simmered in strong tea to a creamy, buttery soft-boil.

The Banh Mi bowl ($10) hit the spot, too. Cubes of fried pickled tofu surrounded a generous portion of ramen with shredded daikon radish and crisp bean sprouts, flavored with cilantro oil and fiery Sriracha in an intense veggie broth. We added kimchi and a dumpling to make it even more interesting.

The ChickenFourPlay ($12) featured boneless chicken fingers, firm, dense and packed with the flavor of local poultry, with crisp veggies and a tea egg in a “double” broth that distills Rumplings’ rich broth to its quintessence.

The Miso Honey bowl ($8) brings enoki and meaty shiitake mushrooms to the party in an appealing sweet-spicy blend of almond milk and red miso that brings you back for more.

On our first visit, we loaded on add-ins and Pellegrino sodas and still could only work our tab up to $32.07. On a return visit, we stuck with the basics and got away for $22.68. For such a deal, I say this: Forget the whole percentage thing. Just tip these hard-working guys well. Ten bucks works for me, and I hope it does for you, too.