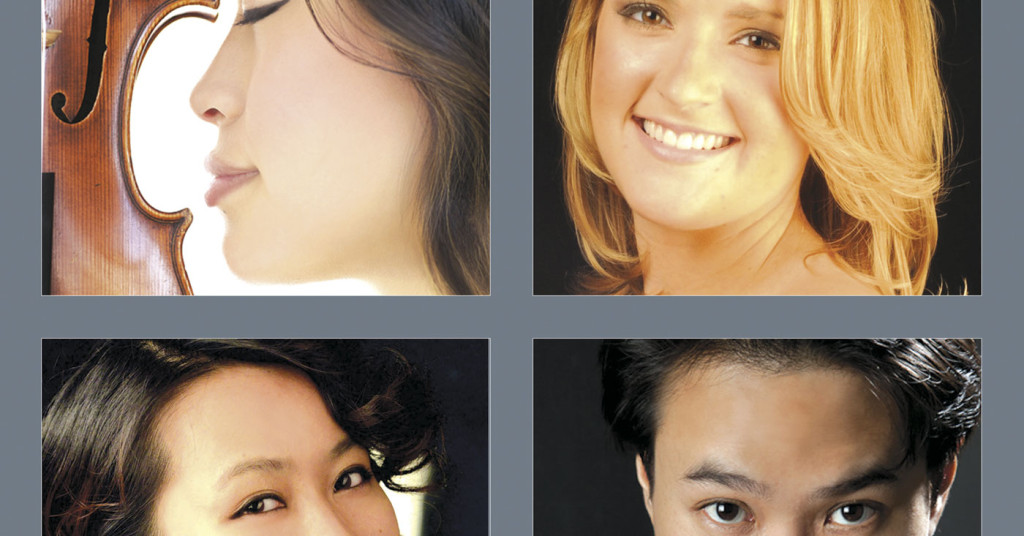 Vivaldi’s “Four Seasons” is one of the earliest, and best loved, show-off pieces for violin virtuosos. But soloist Luosha Fang doesn’t mind sharing the spotlight with three other young virtuosos — each performing one season of the “Four Seasons” in concerts Friday and Saturday with the Louisville Orchestra.

“When the four players were selected they told us we would have a chance to choose which season we would play, and I jumped right in and said, ‘I want ‘Autumn,’” says Fang, with a laugh. “That’s how you get to be Miss Autumn.”

“You can tell from the title it is four seasons — from spring to summer to autumn to winter — and I believe it will be intriguing for the audience to hear four different performers, with four interpretations of a work by one composer,” says Fang.

Vivaldi sets each season as a kind of free-standing, three-movement concerto. And each is a force unto itself, says Fang, speaking by phone from Minnesota before an appearance with the St. Paul Chamber Orchestra.

“For me, the musical seasons are extremely close to the seasons in nature,” says Fang. “I’ve played ‘Summer’ before, and it is very passionate, very vibrant, like that season. Now I get to learn ‘Autumn.’ There’s a poem that corresponds to the music and I was reading about scenes of hunting, peasants dancing and drinking and also the autumn harvest. Then ‘Winter’ has this famous theme: frigid, a dramatic way of creating coldness.” A budding spring begins the cycle of seasons.

On the timeline of classical music, Antonio Vivaldi (1678-1741) is long, long ago. Born before the age of Haydn and Mozart and the development of the modern symphony, he’s a contemporary of Johann Sebastian Bach (1685-1750), but thoroughly Italian. Most important, Vivaldi comes along in the age of fine violin making in Italy, writing, playing and exciting new notes for the wood and varnish creations of the Cremona craftsmen families of Amati, Gaurneri and Stradavari. Vivaldi wrote over 200 concertos for the violin but is best remembered for the four from his “Four Seasons.”

“Vivaldi was one of the first to make the violin a virtuostic instrument,” says Fang. “Before that the violin was just some kind of a fiddle instrument.”

Well maybe not that crude. But Vivaldi certainly lived in a marvelous musical era, with the development of modern symphonic instruments, from clarinets with keys, to horns with valves – and the sweetest-sounding strings.

And, notes David Ludwig, Dean of Artistic Programs at Curtis, players who could make those new strings sing.

Fang, herself, performs on two fine instruments. One is a Mateo Gofriller violin, built in Venice in Strad’s time. The other, which she will play here, is a 19th Century French violin built by Jean-Baptist Vuillaume, owned by the Marlboro Music Festival. Vuillaume studied and meticulously adopted the designs of Guarneri and Stradaveri, delivering what Fang calls the “soulful” sound of the Italian master makers’ violins. A sound Vivaldi helped make famous.

Plus the show-off stuff.

“There’s some amazing fireworks in this piece, and that’s the reason 90 percent of people have heard the ‘Four Seasons’ in some way,” says Ludwig. “It’s a terrific vehicle for great technical virtuosity — and lyrical, melodic playing. And, of course, the music describes a subject we all know about — the four seasons.”

Ludwig says the “Four Seasons” also has a place in the birth of orchestras.

“It’s before they really had a model for what an orchestra looked like,” says Ludwig. “This is pretty early in the music we are used to listening to. What we’re hearing in Vivaldi is a founding father.”

The orchestra’s program also includes works by 20th Century composers Maurice Ravel and Djuro Zivkovik, and stretches ‘way back to composer Jean-Baptiste Lully for music written to accompany a Moliere play performed at the court of King Louis XIV. In all, a sweep across the time line of music.