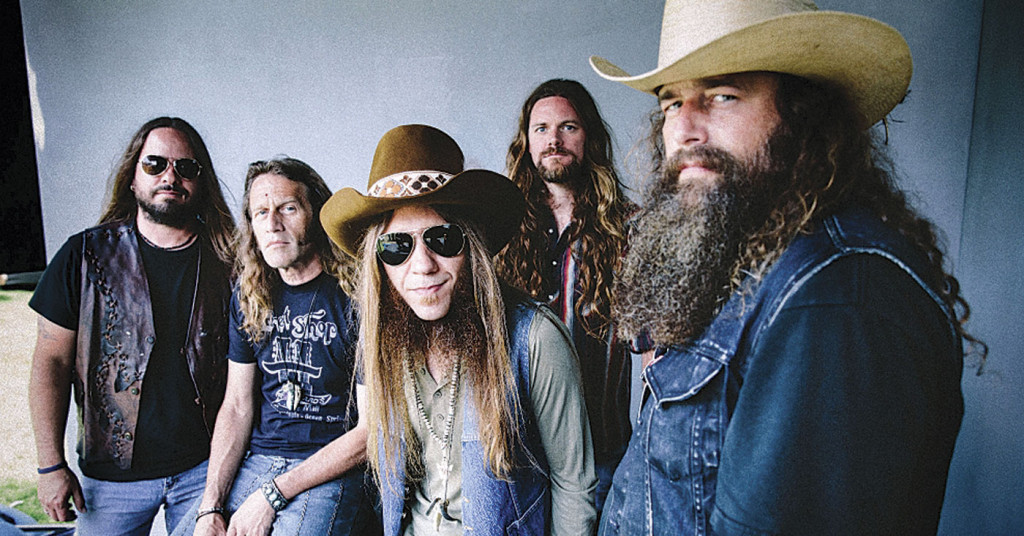 “There I go, watch me leave you behind / holdin’ all the roses on the other side.” It sounds like a victory cry for the Derby, but the band behind that title track from their new album, “Holding All The Roses,” is a quintet from Georgia. If southern bands and country-rock work for you, you’ve got to know Blackberry Smoke, who visit The Mercury Ballroom on Saturday, March 14. LEO recently caught up with their genial fireball of a frontman, Charlie Starr, to discuss the sessions for “Holding All the Roses,” helmed by legendary producer Brendan O’Brien (Pearl Jam, Bruce Springsteen).

LEO: Listening to the new album, I hear Production with a capital “P” — handclaps are echoed significantly, vocal harmonies kept tight. Was this what you expected from working with Brendan O’Brien? Is this why you sought him out?
Charlie Starr: Both. The previous record was us playing live — that’s what we wanted at the time, and it turned out that was great. But we want to grow and change, and let the music do what it’s gonna do. With Brendan that was great because we knew that with him, we had somebody who could do it all. When you go into the studio and start recording, that dictates what it’s gonna be like — whatever the vibe is. So we talked about records that we loved — not necessarily slick records, but “Led Zeppelin III” and “Physical Graffiti” and Aerosmith’s “Rocks.” Records that had so many textures and tones. The little things! It’s like, ‘okay, we made [“The Whippoorwill”] and we didn’t include the little things — and they turn into big things to the ear.’ Handclaps and harmonies and fiddle, and tape slap and reverb that the layperson doesn’t know. But that isn’t their job — their job is to listen to it and enjoy it. Brendan, he’s passionate and he knows all that kinda stuff.

LEO: Your songs and your band attain an amazing audience connection. Of all the songs, can you cite one or two that surprised you with how well they clicked with fans?
CS: “Ain’t Got the Blues,” off “The Whippoorwill.” I never thought people would care as much for that as they do. Not that I thought it was a throwaway — it’s a backporch-y little number, y’know? “Shakin’ Hands with the Holy Ghost” — how the people in Europe love that song! I didn’t even think Europeans would get it. It’s full of tongue-in-cheek metaphor about religion. Specifically, deep South Pentecostal. But they get it, and that was a very pleasant surprise. On the new record, the most laid-back, vibe-y song is called “No Way Back to Eden.” A lot of people at our shows the last two weeks have been coming up and saying that’s their favorite. I think that’s real cool.

LEO: Where the band is these days — your particular place between rock and country — and with country acts becoming more electric, there’s a larger component of country music that your band’s music fits easily alongside.
CS: They’ve made it easier because those country bands aren’t country bands, anyway. They’re all rock ‘n’ roll bands, really. I love Marty Stuart; I love that he’s such a traditionalist. But if you turn on country radio, they don’t sound like him. The people that it really matters to — I don’t know they’d be our fans, anyway. People will argue that point ferociously. They fight with one another: ‘They’re not a country band!’ And I’m like, ‘Well you stand here and argue about it — we’re gonna go and make some music.’

LEO: I’ve seen your version of “Midnight Rider.” Any covers in the set these days?
CS: Back in the beginning we were a bar band. Four sets a night in a lot of little smoky bars. It’s fun to dip into the backlog of covers that we know, and play Allman Brothers or Little Feat.

LEO: Now people are dipping into your songbook.
CS: Yeah, that’s a funny feeling. My oldest son, every now and then, he’ll send me a link to a video on Youtube and say, ‘Hey, check out this band doing one of your songs.’ It’s a huge compliment.